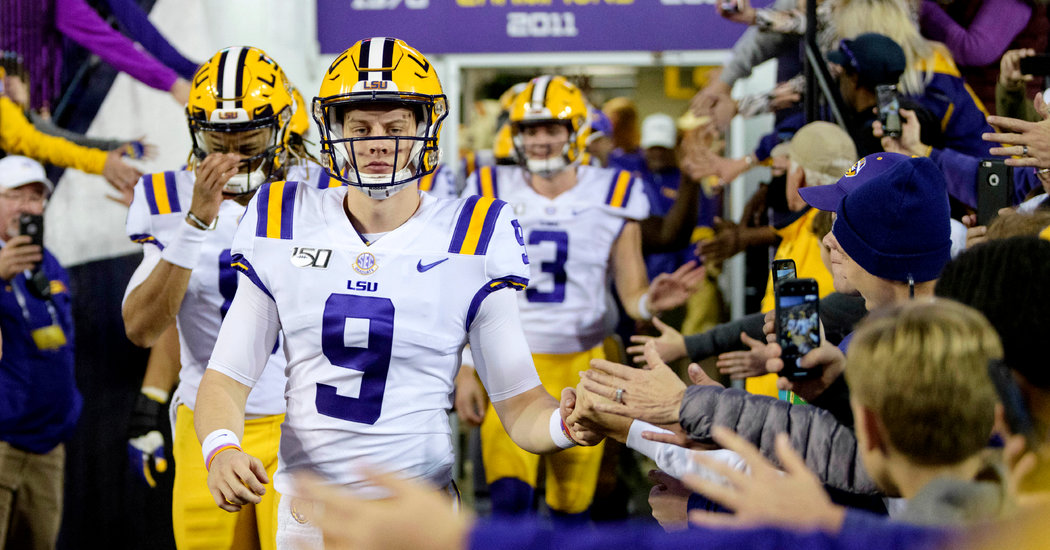 The Cincinnati Bengals’ tiger stripes run deep for the Luehrman twins, Adam and Ryan. Growing up near Athens, Ohio, they shared Carson Palmer and Chad Johnson jerseys and had a passing chance of correctly spelling T.J. Houshmandzadeh. They know of the playoff pratfalls, the crushing injuries, the ownership’s tightfisted ways and the decades of rotten (sometimes tragic) luck.

And now they hear the not-uncommon whispers around town that the local boy Joe Burrow, the Heisman Trophy-winning quarterback who is the presumptive top pick in the N.F.L. draft, would be better off ending up just about anywhere else than in Cincinnati, which is expected to select him first on Thursday night.

“Oh, his career is ruined because he goes to the Bengals,” said Adam Luehrman, who like his brother has known Burrow since they were third graders.

Of course, maybe, just maybe, Burrow is the right player to lift the Bengals above the weight of their own history. Or he is, as Boomer Esiason, the former Cincinnati quarterback, boldly suggests, the chosen one.

“It’s the same as LeBron James,” said Esiason, who made clear that he was not comparing their talent, but their circumstances — Ohio kids picked first over all who can affect change not just in their arenas but in their communities. “LeBron basically saved the Cavaliers. If this kid is what I think he’s worth, he’s going to accept this challenge and be the reason the Bengals go as far as they go.”

It would not be the first time Burrow has taken up such a task. He carried Athens High, which when he arrived hadn’t been to the playoffs since 1990, to the state championship game as a senior. And after transferring from Ohio State, he led Louisiana State — long defined by its Paleolithic offense — to the national championship last season by shredding the best defenses in the country, throwing an N.C.A.A. record 60 touchdown passes.

Yet, his most powerful moment was his Heisman speech, when he pointed out that children in Appalachian towns like his too often come home to not enough food on the table. Within weeks, more than $500,000 poured into the county food pantry, more than five times its annual budget. The windfall proved to be provident when the coronavirus pandemic hit, allowing the pantry, which was feeding families once a week in November, to increase to four times a week.

Once he is drafted, Burrow plans to lend his name to causes related to hunger and poverty, and a base in Cincinnati could give his efforts more weight.

“In southeast Ohio, Joe and his family are considered real heroes,” said Karin Bright, the board president of the Athens County Food Pantry. “If he would decide to continue on with some philanthropic activity, it would get major attention because his story is just that compelling: the kid who didn’t get to play, goes to another school, wins the Heisman, undefeated season. He’s going to have that kind of voice whatever he chooses to do with it.”

That voice has found far greater resonance in the last year.

In early September, Burrow was just another college quarterback trying to make the most of his final season. He arrived at L.S.U. as a graduate transfer in 2018 after being unable to rise to the top of a stacked depth chart in three years at Ohio State. His first season with the Tigers was solid and he finished with a flourish. Still, his odds of winning the Heisman were long at the start of the 2019 season: 200-to-1. Some N.F.L. scouts did not consider his arm strength sufficient.

For a window into what has fueled Burrow’s ascent, consider his favorite athlete, the one he gushes over, proudly wearing his T-shirt and photoshopping his idol’s face onto his own high school football photo. It is not Drew Brees. Or Aaron Rodgers. Or Patrick Mahomes. Or even Tom Brady.

It is Matthew Dellavedova, the scrappy Cleveland Cavaliers reserve guard.

“I saw him dive on the floor and punch someone in the face, and it got me going,” Burrow, an all-state point guard in high school, once told The Cleveland Plain Dealer (though none of Dellavedova’s on-court scraps appeared to escalate quite that far).

Burrow’s appreciation for the rugged elements of sports comes, in part, from being raised in a football family that grew up on the other side of the ball. One older brother, Jamie, was a linebacker at Nebraska, and the other, Dan, was a defensive back there. His father, Jimmy, played in the secondary at Nebraska, too, and was the defensive coordinator at Ohio University for 14 seasons.

To them, there was little surprise when Burrow bounced up after taking a huge lick along the Auburn sideline last season — a hit that drew a gasp from a capacity crowd at Tiger Stadium. “Joe’s always played the game like a defensive guy,” Jimmy had said after an earlier game.

That grit, though, is sometimes well hidden — behind a baby face, a predilection for cartoon-character clothing (“Looney Tunes” T-shirts and the “SpongeBob SquarePants” socks he wore to the Heisman ceremony), and a swagger embodied by his casual puffs on a cigar as he rolled into the news conference after the national championship game.

By then, of course, he had built a legion of fans in southern Louisiana, where they preferred to spell his name Burreaux. Still, few believe in him more ardently than the Luehrman brothers — not because they know the Bengals so well, but because they understand Burrow so deeply.

Nobody has caught more of Burrow’s passes than the twins — for four years as receivers as Athens High, including a pair of touchdown catches each in the 2014 state title game, and many more over the last five summers when Burrow would return home from college and the Luehrmans, who are tight ends at Ohio University, were looking for ways to get better.

Those workouts reconvened after the coronavirus prompted Burrow to return home last month from Southern California, where he was preparing for a since-canceled workout in front of N.F.L. scouts. He has been throwing regularly to the Luehrmans — first at their high school field, until the recently renamed Joe Burrow Stadium was shuttered, and then at another empty field. The workouts often take place before an audience of one: Burrow’s father.

That everyone involved wants to keep the workouts a secret speaks to Burrow’s rise.

In the lead-up to the championship game, Burrow put his growth down to two factors: a new scheme that the assistant coach Joe Brady brought to L.S.U. from the New Orleans Saints, and a full off-season to work with his receivers. They established a familiarity that echoed when a September game at Texas was in the balance and, facing third and 17, Burrow stepped away from a blitz and knew exactly where Justin Jefferson would be — hitting him over the middle for a clinching 61-yard touchdown.

“He did stuff like that in Athens all the time,” Ryan Luehrman said. “When we were in high school, every route — if we didn’t get it 100 percent, we were going to do it until we did, whether it was staying after practice, coming in on Saturday. Everybody sees how much he puts into it and follows suit. There was probably a lot of that at L.S.U.”

He noted that Burrow sat for three years at Ohio State and arrived in Baton Rouge with only one assurance — that he could compete for the starting job, a position he did not win until a week before the season opener.

“Joe wasn’t the Heisman Trophy winner when he got here,” Orgeron said. “He developed, he got better, he kept his mouth shut. Joe has not had a silver spoon in his mouth all his life.”

Orgeron added, “He came here with faith and built a championship team, and I don’t see why he couldn’t do it in Cincinnati.”

From a distance, what stands out to David Anderson, a former N.F.L. receiver who works for Gains Group, a sports technology consultancy, is Burrow’s ability to handle chaos: avoiding second down sacks, fumbles or poor throws that lead to tipped balls or offensive pass interference.

(After the N.F.L. cognoscenti went into a tizzy at the news that Burrow’s hands were measured at a smallish nine inches — prompting a Burrow joke on Twitter about retiring — Anderson noted how well Burrow carries the ball near his front shoulder, making it less susceptible to being stripped.)

Most impressive, Anderson said, was a 23-20 win over Auburn, whose defensive linemen Derrick Brown and Marlon Davidson — first-round draft candidates themselves — generated heavy pressure in a scheme that puzzled L.S.U. early.

But Burrow’s top four receivers that night caught eight, seven, seven and seven passes each, and his only touchdown went to another receiver, Terrace Marshall Jr. Even under duress in a tense game, Burrow rarely deviated from good decisions.

“A game like that gives you context,” Anderson said. “A lot of quarterbacks, when the going gets tough, they abandon their rules, abandon what they’ve been taught and throw it to their favorite receiver. You watch the third and fourth quarter, and he’s making his reads. That’s a guy you bet on.”

And so, it appears, the Bengals will.

Burrow is poised to have the chance to do what their last two longstanding quarterbacks, Carson Palmer and Andy Dalton, who largely fulfilled expectations, could not — contend for a title. Though the Bengals have long shed their Bungles label, the starting quarterback in their last playoff victory was Esiason. It came after the 1990 season — or nearly six years before Burrow was born. That drought is the longest in the N.F.L.

Though he has been a frequent critic, Esiason said the owner, Mike Brown, and his family are true to football roots of their late patriarch, Paul Brown. “This isn’t Jerry Jones or Robert Kraft,” Esiason said, referring to a pair of the N.F.L.’s flashier owners. “They’re probably still driving Buick Skylarks and wearing khaki pants and blue Oxford shirts. They were always frugal, but when you look at the nuts and bolts, they knew their football.”

Thus it was noteworthy when the Bengals, who generally draft well, made rare splurges in free agency by signing defensive tackle D.J. Reader to a four-year, $53 million contract and cornerback Trae Waynes to a three-year, $42 million deal.

The offense also has some building blocks in place: running back Joe Mixon and the returning star receiver, A.J. Green, who was slapped with an $18 million franchise tag, and last year’s first-round pick, left tackle Jonah Williams, who missed all of last season with injuries.

How much the Bengals bounce back from last season’s 2-14 record, and how far they go in the seasons beyond, will involve more than that — whether it is by performance or example or force of will.

“Joe Burrow has to be the reason it doesn’t go sideways,” said Esiason, whose only quibble with Burrow is that he did not stick it out at Ohio State. “He has to be bigger than all of it — carry himself like Tom Brady, like he’s going to change it just like he did at L.S.U. It’s a big ask, and it’s a lot of pressure, but that’s what makes it so awesome, such a unique opportunity for a hometown kid.”