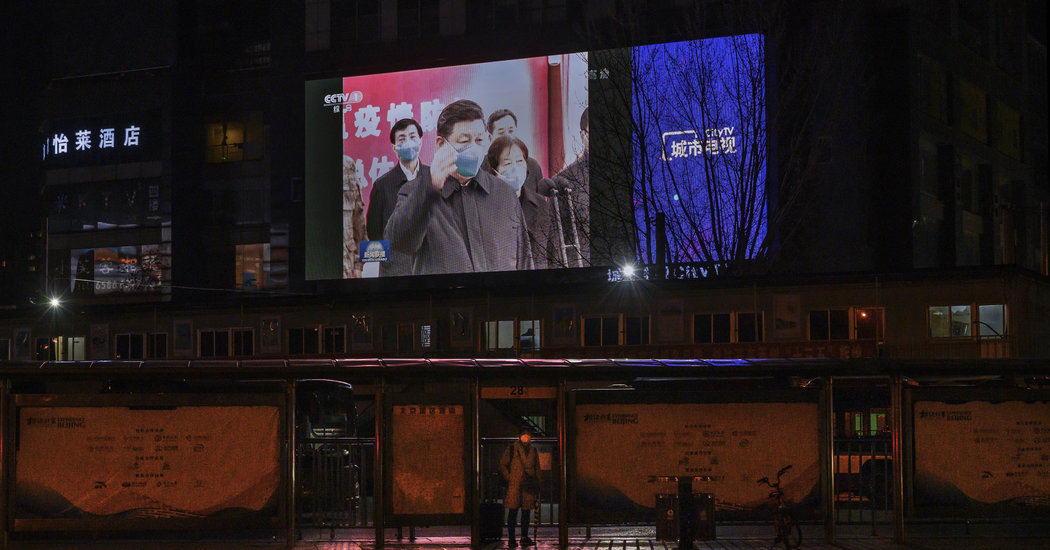 Spread the word, the messages said: The Trump administration was about to lock down the entire country.

“They will announce this as soon as they have troops in place to help prevent looters and rioters,” warned one of the messages, which cited a source in the Department of Homeland Security. “He said he got the call last night and was told to pack and be prepared for the call today with his dispatch orders.”

Since that wave of panic, United States intelligence agencies have assessed that Chinese operatives helped push the messages across platforms, according to six American officials, who spoke on the condition of anonymity to publicly discuss intelligence matters. The amplification techniques are alarming to officials because the disinformation showed up as texts on many Americans’ cellphones, a tactic that several of the officials said they had not seen before.

That has spurred agencies to look at new ways in which China, Russia and other nations are using a range of platforms to spread disinformation during the pandemic, they said.

The origin of the messages remains murky. American officials declined to reveal details of the intelligence linking Chinese agents to the dissemination of the disinformation, citing the need to protect their sources and methods for monitoring Beijing’s activities.

The officials interviewed for this article work in six different agencies. They included both career civil servants and political appointees, and some have spent many years analyzing China. Their broader warnings about China’s spread of disinformation are supported by recent findings from outside bipartisan research groups, including the Alliance for Securing Democracy and the Center for a New American Security, which is expected to release a report on the topic next month.

Two American officials stressed they did not believe Chinese operatives created the lockdown messages, but rather amplified existing ones. Those efforts enabled the messages to catch the attention of enough people that they then spread on their own, with little need for further work by foreign agents. The messages appeared to gain significant traction on Facebook as they were also proliferating through texts, according to an analysis by The New York Times.

American officials said the operatives had adopted some of the techniques mastered by Russia-backed trolls, such as creating fake social media accounts to push messages to sympathetic Americans, who in turn unwittingly help spread them.

The officials say the Chinese agents also appear to be using texts and encrypted messaging apps, including WhatsApp, as part of their campaigns. It is much harder for researchers and law enforcement officers to track disinformation spread through text messages and encrypted apps than on social media platforms.

Other rival powers might have been involved in the dissemination, too. And Americans with prominent online or news media platforms unknowingly helped amplify the messages. Misinformation has proliferated during the pandemic — in recent weeks, some pro-Trump news outlets have promoted anti-American conspiracy theories, including one that suggests the virus was created in a laboratory in the United States.

American officials said China, borrowing from Russia’s strategies, has been trying to widen political divisions in the United States. As public dissent simmers over lockdown policies in several states, officials worry it will be easy for China and Russia to amplify the partisan disagreements.

“It is part of the playbook of spreading division,” said Senator Angus King, independent of Maine, adding that private individuals have identified some social media bots that helped promote the recent lockdown protests that some fringe conservative groups have nurtured.

The propaganda efforts go beyond text messages and social media posts directed at Americans. In China, top officials have issued directives to agencies to engage in a global disinformation campaign around the virus, the American officials said.

Some American intelligence officers are especially concerned about disinformation aimed at Europeans that pro-China actors appear to have helped spread. The messages stress the idea of disunity among European nations during the crisis and praise China’s “donation diplomacy,” American officials said. Left unmentioned are reports of Chinese companies delivering shoddy equipment and European leaders expressing skepticism over China’s handling of its outbreak.

Mr. Trump himself has shown little concern about China’s actions. He has consistently praised the handling of the pandemic by Chinese leaders — “Much respect!” he wrote on Twitter on March 27. Three days later, he dismissed worries over China’s use of disinformation when asked about it on Fox News.

Asked about the new accusations, the Chinese Foreign Ministry released a statement on Tuesday that said, “The relevant statements are complete nonsense and not worth refuting.” Zhao Lijian, a ministry spokesman, has separately rebutted persistent accusations by American officials that China has supplied bad information and exhibited a broader lack of transparency during the pandemic. “We urge the U.S. to stop political manipulation, get its own house in order and focus more on fighting the epidemic and boosting the economy,” Mr. Zhao said at a news conference on Friday.

The extent to which the United States might be engaging in its own covert information warfare in China is not clear. While the C.I.A. in recent decades has tried to support pro-democracy opposition figures in some countries, Chinese counterintelligence officers eviscerated the agency’s network of informants in China about a decade ago, hurting its ability to conduct operations there.

Chinese officials accuse Mr. Trump and his allies of overtly peddling malicious or bad information, pointing to the president’s repeatedly calling the coronavirus a “Chinese virus” or the suggestion by some Republicans that the virus may have originated as a Chinese bioweapon, a theory that U.S. intelligence agencies have since ruled out. (Many Americans have also criticized Mr. Trump’s language as racist.)

Republican strategists have decided that bashing China over the virus will shore up support for Mr. Trump and other conservative politicians before the November elections.

Given the toxic information environment, foreign policy analysts are worried that the Trump administration may politicize intelligence work or make selective leaks to promote an anti-China narrative. Those concerns hover around the speculation over the origin of the virus. American officials in the past have selectively passed intelligence to reporters to shape the domestic political landscape; the most notable instance was under President George W. Bush in the run-up to the Iraq War.

But it has been clear for more than a month that the Chinese government is pushing disinformation and anti-American conspiracy theories related to the pandemic. Mr. Zhao, the Foreign Ministry spokesman, wrote on Twitter in March that the U.S. Army might have taken the virus to the Chinese city of Wuhan. That message was then amplified by the official Twitter accounts of Chinese embassies and consulates.

The state-run China Global Television Network produced a video targeting viewers in the Middle East in which a presenter speaking Arabic asserted that “some new facts” indicated that the pandemic might have originated from American participants in a military sports competition in October in Wuhan. The network has an audience of millions, and the video has had more than 365,000 views on YouTube.

“What we’ve seen is the C.C.P. mobilizing its global messaging apparatus, which includes state media as well as Chinese diplomats, to push out selected and localized versions of the same overarching false narratives,” Lea Gabrielle, coordinator of the Global Engagement Center in the State Department, said in late March, referring to the Chinese Communist Party.

But Chinese diplomats and operators of official media accounts recently began moving away from overt disinformation, Ms. Gabrielle said. That dovetailed with a tentative truce Mr. Trump and Mr. Xi reached over publicly sniping about the virus.

American officials said Chinese agencies are most likely embracing covert propagation of disinformation in its place. Current and former American officials have said they are seeing Chinese operatives adopt online strategies long used by Russian agents — a phenomenon that also occurred during the Hong Kong protests last year. Some Chinese operatives have promoted disinformation that originated on Russia-aligned websites, they said.

And the apparent aim of spreading the fake lockdown messages last month is consistent with a type of disinformation favored by Russian actors — namely sowing chaos and undermining confidence among Americans in the U.S. government, the officials said.

“As Beijing and Moscow move to shape the global information environment both independently and jointly through a wide range of digital tools, they have established several diplomatic channels and forums through which they can exchange best practices,” said Kristine Lee, a fellow at the Center for a New American Security who researches disinformation from China and Russia.

“I’d anticipate, as we have seen in recent months, that their mutual learning around these tools will migrate to increasingly cutting-edge capabilities that are difficult to detect but yield maximal payoff in eroding American influence and democratic institutions globally,” she added.

‘There Is No National Lockdown’

The amplification of the fake lockdown messages was a notable instance of China’s use of covert disinformation messaging, American officials said.

A couple of versions of the message circulated widely, according to The Times analysis. The first instance tracked by The Times appeared on March 13, as many state officials were enacting social distancing policies. This version said Mr. Trump was about to invoke the Stafford Act to shut down the country.

The messages generally attributed their contents to a friend in a federal agency — the Pentagon, the State Department, the Department of Homeland Security, the F.B.I., the C.I.A. and so on. Over days, hundreds of identical posts appeared on Facebook and the online message board 4chan, among other places, and spread through texts.

Another version appeared on March 15, The Times found. This one said Mr. Trump was about to deploy the National Guard, military units and emergency responders across the United States while imposing a one-week nationwide quarantine.

That same day, the National Security Council announced on Twitter that the messages were fake.

“There is no national lockdown,” it said, adding that the Centers for Disease Control and Prevention “has and will continue to post the latest guidance.”

“I received several texts from loved ones about content they received containing various rumors — they were explicitly asked to share it with their networks,” she wrote. “I advised them to do the opposite. Misinfo is not what we need right now — from any source foreign or domestic.”

Since January, Americans have shared many other messages that included disinformation: that the virus originated in a U.S. Army laboratory at Fort Detrick in Maryland, that it can be killed with garlic water, vitamin C or colloidal silver, that it thrives on ibuprofen. Often the posts are attributed to an unnamed source in the U.S. government or an institution such as Johns Hopkins University or Stanford University.

As the messages have sown confusion, it has been difficult to trace their true origins or pin down all the ways in which they have been amplified.