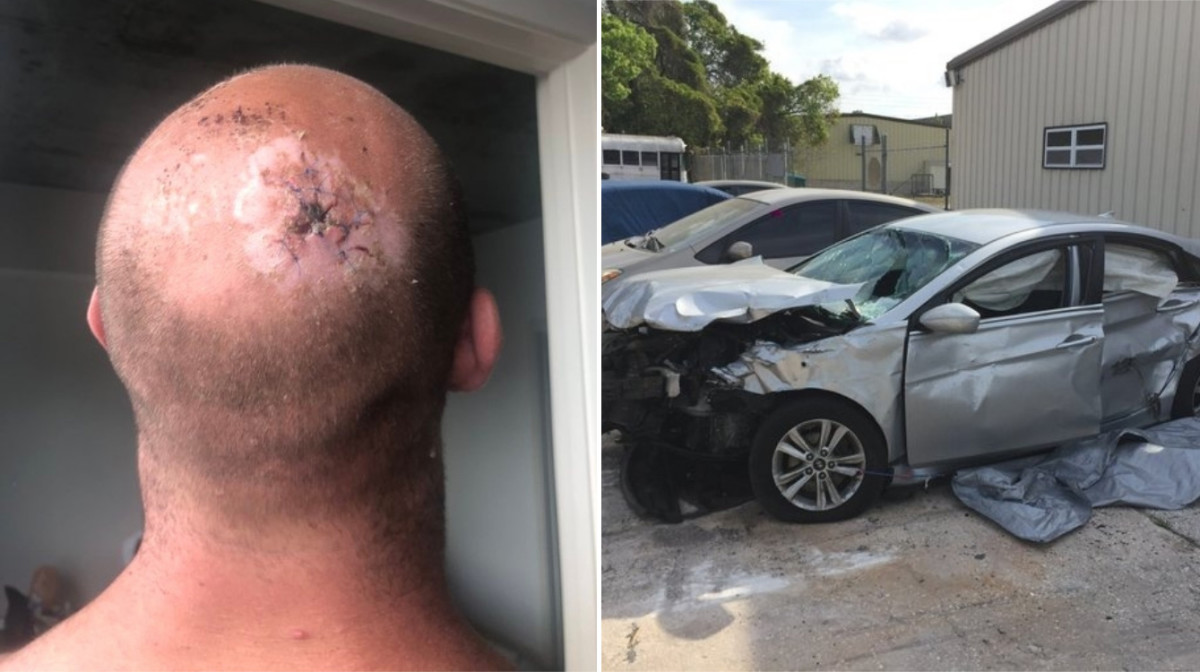 At least he’s all right

Matha, 31, who wrestled under the name Dorian Mak for the company’s developmental NXT brand, was part of a large group of performers and other employees laid off by WWE last week.

The timing of the release could hardly have been worse for Matha, who revealed over the weekend that he had gotten in a serious car accident right before he was cut. He was sent through the windshield of his car and left with a nasty wound in the back of his skull. He shared photos of the stitches in his head and the damage the crash did to his car.

Matha played college football at D-II Indiana University of Pennsylvania. After failing to catch on with the Bengals and Montreal Alouettes, he signed with WWE in 2015 and began training to become a wrestler. He appeared in only three televised matches before being cut last week.

Despite being released, Matha says he plans on continuing to chase his wrestling dream.

“I would like to continue wrestling,” Matha said in a live video on Instagram, according to Wrestling Inc. “I’ve worked my ass off for this skill set. Five years, blood, sweat, and tears to be a great entertainer, okay? And I’m not just going to throw that by the wayside. I’m going to look for somebody who is looking for a young, hungry, driven, ambitious man that has something to offer the world. I think that they’re out there. I think that there’s plenty of people out there. It’s unfortunate that the WWE didn’t think the same things about me that I think about myself, but I know that there’s other people out there that think those things of me.”

Star USC receiver Michael Pittman Jr. has had to prepare for the NFL draft without catching passes due to the coronavirus. … Don’t buy the chatter about the Giants and Justin Herbert. … A shortened or canceled MLB season could cost these legends some big milestones. … Exploring the meaning behind soccer clubs’ crests.

Alex Rodriguez and Jennifer Lopez are reportedly getting serious about bidding for the Mets. … The debut of The Last Dance was ESPN’s most-watched documentary ever with an average of 6.2 million viewers. … Wayne Gretzky says he’s rooting for Alex Ovechkin to break his career goals record.

Who could have seen this coming?

Boston would never close a park to Tom Brady

Marshawn Lynch is going to be on Bar Rescue on Sunday

There’s a photo of Lyndon B. Johnson going viral but it doesn’t show what you’re being told it shows. … Six foreign tourists were found isolating themselves from the coronavirus inside an Indian cave.

This whole thread is horrifying

Stunt performer students make the most of isolation