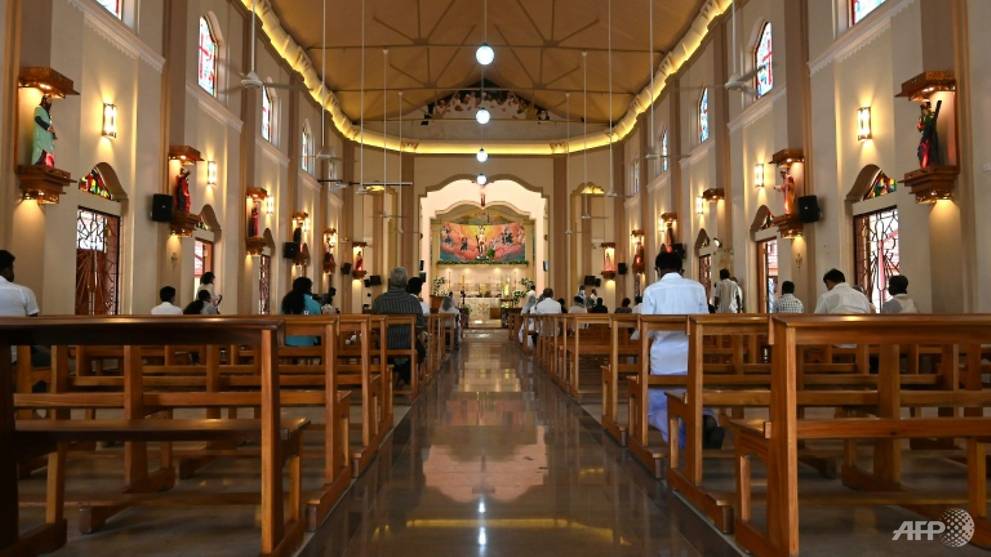 COLOMBO: Survivors of last year’s devastating suicide bombings in Sri Lanka held a private anniversary service on Tuesday (Apr 21) because of a coronavirus lockdown as the nation paid tribute with a two-minute silence.

The pandemic forced the Roman Catholic leadership to call off elaborate services to honour the 279 people killed at hotels and churches in the Easter Sunday attacks.

Instead, churches across the country rang their bells for five minutes.

This was followed by two minutes of silence from 8.45 am (0315 GMT) – the moment the bombers struck. Even television channels went silent during the tribute.

Some survivors attended a closed service at St Sebastian’s church just outside Colombo, which was hit by a bomb.

At St Anthony’s church in the capital, residents prayed outside and lit candles near a memorial for the 56 people who perished inside.

On April 21 last year, seven followers of a local Muslim radical group went into three churches and three luxury hotels as services and morning buffets were being held and set off explosive vests.

“We honour especially all those, who lost their loved ones and those who were injured, for their spirit of magnanimity in not reacting in anger and hatred,” said Cardinal Malcolm Ranjith, Sri Lanka’s Catholic leader in an anniversary message.

Ranjith thanked minority Catholics for not retaliating against Muslims.

However, inter-communal riots did erupt three weeks after the attacks. One man was killed and hundreds of homes and vehicles were damaged.

The government used emergency powers to prevent a spread of violence.

The extremist National Thowheeth Jama’ath (NTJ), that had pledged allegiance to the Islamic State militant group, was held responsible for the bombings.

Cardinal Ranjith said that the church has “spiritually forgiven” the attackers, but their supporters must still be brought to justice.

Four NTJ leaders were killed in a gun battle five days after the bombings. Another 135 people linked to the group remain in custody.

As Sri Lanka honoured the Easter Sunday victims, it was battling to contain the coronavirus pandemic, which has claimed seven lives on the island.

On the eve of the anniversary, authorities extended a month-long lockdown by a week as the number of new infections rose.

The unveiling of special monuments for attack victims at two cemeteries was put off because of social distancing rules to prevent the spread of the virus.

Plans to open a soup kitchen at the St Anthony’s were also scrapped.

A year after the attack, some survivors are still in hospital. Many have lost immediate family members.

Saranya, 25, was nine months pregnant when she attended Easter mass at St Anthony’s. Her husband Christopher was killed.

Their son was born the next day.

“My husband never saw his son,” Saranya said. “My baby will be one year old on the 22nd, but how can we celebrate. It is a day after his father’s death anniversary. It is a sad day for us.”

T. Harshi’s son was killed at St Sebastian’s. She lost her left eye and is confined to a wheelchair.

“With the grace of God and the determination of all those who are helping me, I hope to be able to walk again,” she said in a video interview released by the church.