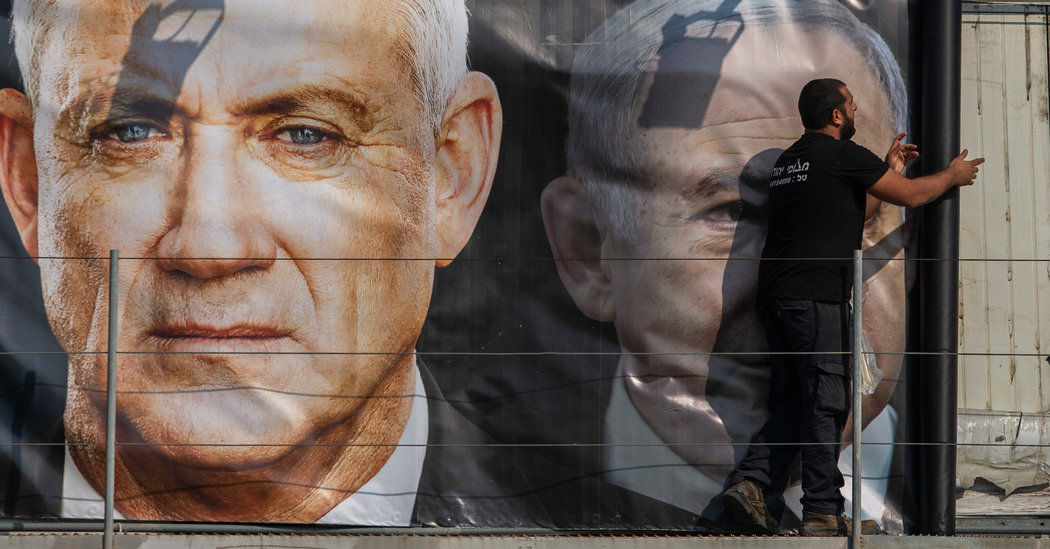 JERUSALEM — At least there won’t be a fourth election.

That slender reed was about the only thing that truly united Israelis on both sides of the polarized country’s political chasm on Tuesday as they began to absorb the details of a deal for a joint government struck by Prime Minister Benjamin Netanyahu and his former challenger, Benny Gantz.

But not having to wait around for another noxious campaign? That, nearly everyone could get behind.

“Our country is constantly in crisis and holding elections, and our leaders are always fighting,” said Limor Cohen, 54, accompanying her friend to a doctor’s appointment in Tel Aviv. “We finally have a situation that can bring about some stability and quiet. That’s exactly what we need.”

The deal could still be blocked by the Supreme Court, which is expected to rule on petitions claiming that because Mr. Netanyahu has been indicted on criminal charges he should be disqualified from leading a new government.

“Gantz stole our votes,” said Yitzhak Blatt, 90, a retired architect who was basking in the hot sun on a bench in Tel Aviv’s Rabin Square. “The people who voted for him wanted him to replace Netanyahu, not keep him in office.”

Michael Kirsh, 65, relaxing outside a sandwich shop, said he was disgusted. “Gantz was supposed to be an alternative to Netanyahu,” Mr. Kirsh said. “Instead of replacing Netanyahu, he saved him.”

Mr. Gantz even gave Mr. Netanyahu a veto over choosing the next police commissioner, state prosecutor and members of the Supreme Court. Sima Kadmon, a columnist for Yediot Ahronot, warned that even if Mr. Netanyahu is convicted, by the time “his appeal comes before the Supreme Court, the justices there will be his.”

“This isn’t an emergency government,” she wrote. “It isn’t a unity government either. It’s a capitulation government that was formed using the coronavirus as an excuse.”

And Yair Lapid, Mr. Gantz’s former partner, gave a speech Tuesday night in which he apologized to “all those people whom I convinced to vote for Benny Gantz.”

“I didn’t believe that they would steal your vote and give it to Netanyahu,” Mr. Lapid said, adding: “It’s the worst act of fraud in the history of this country.”

Mr. Netanyahu’s partisans took a different view: “The Netanyahu era is over,” declared Matti Tuchfeld, a columnist for the right-wing Israel Hayom newspaper, observing that Mr. Netanyahu had for the first time assented to a date for the end of his long tenure as prime minister: October 2021.

Israel’s practitioners of political neutrality found much to praise in the Gantz-Netanyahu agreement.

Yohanan Plesner, president of the Israel Democracy Institute, lamented a few ways in which he said the deal violated “democratic norms.” For example, he said, it abandons the traditions of letting the opposition run the economic committee in Parliament and have a hand in the selection of judges.

But he welcomed what he called a “cease-fire” in the long-running ideological battle over the rule of law, noting that Mr. Gantz would have the power to shut down right-wing attempts to override Supreme Court decisions and that Mr. Netanyahu would have to stand trial like any other Israeli citizen.

More urgently, Mr. Plesner said the new government would be well armed against the coronavirus: because it expects to boast 78 out of 120 members of Parliament, it can take decisive action without being held up by individual coalition members making extortionate demands, a routine feature of narrow majorities.

“This is a government that will be able to make decisions,” Mr. Plesner said. “That’s a positive.”

Still, Mr. Plesner acknowledged that the agreement sets up a monumental test for Israel’s Supreme Court.

Several legal challenges are in process that could prompt the high court to rule that Mr. Netanyahu, because of his criminal case, should be barred from leading the new government.

If that happens, rather than simply allowing the No. 2 politician in Mr. Netanyahu’s Likud party to step into his shoes, the deal provides that Israel will immediately go to new elections after all.

That effectively dares the Supreme Court, already under attack for years from the right, to force another election on citizens who have made clear they do not want one.

Grasping those kinds of net effects of the Gantz-Netanyahu deal left some voters upset. Miri Paperni, an accountant from Rehovot, said she felt the coronavirus was being exploited to protect Mr. Netanyahu, when what was needed was for the politicians to put their own interests aside to fight the pandemic.

“I’ve been at home on a forced leave like the rest of our office,” she said, and until now she had avoided the news. “It has been a wonderful bubble,” she said.

Even given her low expectations, she said she was dismayed at the “farce” of the deal struck by Mr. Gantz, for whom she had voted.

Come to think of it, Ms. Paperni said, she might have been better off in her bubble: “Maybe it’s best to detach ourselves from this reality.”

Others took a much longer view, however.

Tuesday was Holocaust Remembrance Day, and at 10 a.m., as each year, a siren sounded for two minutes. Drivers pulled over and cut their engines; people in quarantine stood at attention on their balconies.

In Kfar Yona, Peleg Levy, 55, a filmmaker working on a project about Israel’s founding generation, found something redeeming in its latter-day politicians’ joining forces to fight a global menace.

“We are in a moment of war,” Mr. Levy said. “There is something trying to kill us. Not tanks, but a virus. And they took a leadership decision, against the wishes of many of their supporters. What the Jews were unable to do in the Warsaw ghetto — unite in the fight against the Germans — is being done now. I see the unity, going together despite everything, as a historical moment of repair.”