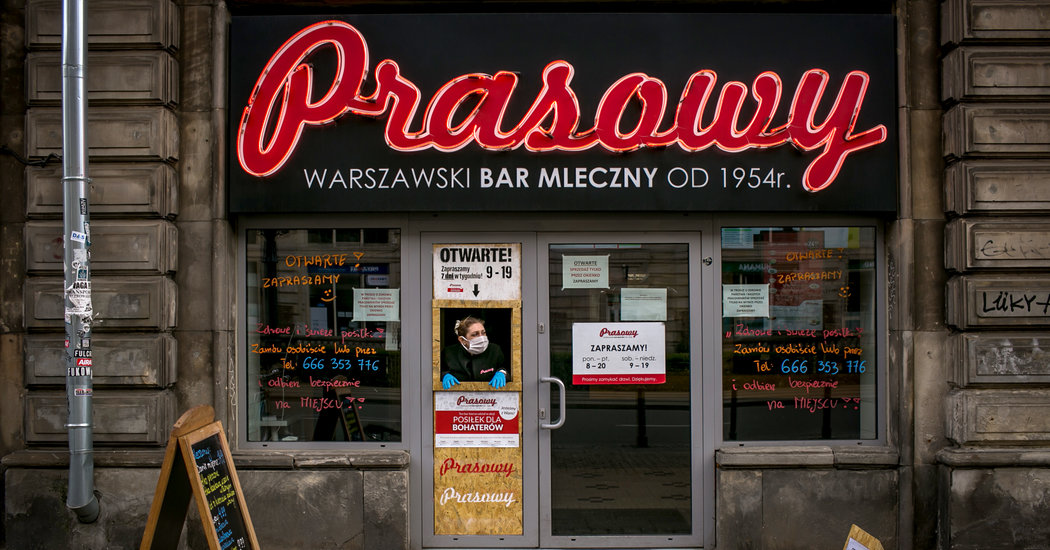 WARSAW — The Polish milk bar is remarkably well suited to the coronavirus lockdown.

At these traditional restaurants, diners can pick up orders of ready-made pierogi or get home delivery of the familiar comfort of a barszcz beet soup and stuffed cabbage, to warm in the oven. Much of the menu comes at spectacularly low prices, thanks to the government subsidies that the milk bars receive.

“People are struggling with an extremely difficult situation right now,” Kamil Hagemajer, who co-owns one of the most famous milk bars in Warsaw, Bar Prasowy, wrote in an email. “It seems our world has been built on very fragile foundations.”

But even before the lockdown, milk bars — so called because they were historically vegetarian — straddled a strange divide in Polish society. Somewhere between a diner and a soup kitchen, they are both hip and vital. They offer both Communist nostalgia and Communist-era prices; even the most eyes-bigger-than-stomach customer will struggle to run a bill of more than $5.

“They are especially needed right now,” Jan Binczycki, a librarian at the Malopolska Public Library in Krakow, said over lunch at that city’s Bar Gornik in February, before the nationwide lockdown and the closing of restaurant dining rooms. “We have a lot of problems with things like gentrification and social stratification. Milk bars are at the front lines of the fight between old and new.”

Under Communism, they were a forced staple, some of the only places to eat out. But in the years after the old order fell in 1989, international chain restaurants arrived en masse. Poles flocked to try McDonald’s cheeseburgers, kebabs and Vietnamese food, while milk bars came to be seen as a grim reminder of a past pockmarked with scarcity and oppression. Today, there are only a few hundred left, down from thousands in their heyday.

But in the past decade, milk bars have grown popular again as people seek out familiar food as a way to connect with the past and fashion a contemporary Polish identity.

“Being part of the world once meant having access to the world’s food,” said Fabio Parasecoli, the director of the food studies doctoral program at New York University, who is researching changing attitudes toward traditional Polish foods. “But now, being cosmopolitan means rediscovering one’s traditions.”

Before the virus hit, a line formed at Bar Bambino, one of the most popular lunch spots in Warsaw, at 11 a.m. and didn’t let up until 2 p.m., as residents of the Polish capital sought a quick bite of cheap, comforting food. Older men, their beards flecked with soup, ate near young parents whose children had spilled food down their sweaters. Artists scrolled through their Instagram feeds while office workers, their ties flipped over their shoulders, ate with one hand and emailed with the other.

Recipes are as traditional as they come. There’s zurek, a soup made from fermented rye, and barszcz, the beet soup served with dumplings or sour cream. There are scores of different pierogi: spinach and mushroom, potato and cheese. Kompot, a fruit drink, is popular with older people trying to warm up in winter. And the vegetarian offerings are cheaper, thanks to government subsidies.

Before the lockdown, milk bar diners ordered at one window and collected their plates from another. There were no waiters. There were no tablecloths. If you forgot to pick up your order, the chefs might have called it out over a loudspeaker, high-school cafeteria style.

“It can be a turnoff for people to have mismatched plates,” said Anna Gidynska, a food writer who publishes a popular lifestyle blog. “But I wouldn’t expect perfect plating at my mom’s home, so I wouldn’t expect it here, either.”

Milk bars predate Communist rule in Poland, but they are strongly associated with that era, and a rising nostalgia has recently renewed interest in the restaurants. Even though those years were difficult, many people miss what milk bars represent: an egalitarian, distinctly Polish place.

This mix of traditional and modern is on full display at Bar Prasowy. Once, it was a go-to lunch spot for journalists at a nearby newspaper, the greasiest of greasy spoons. After 1989, it fell into disrepair. But when the city tried to close the space in 2011, neighborhood residents staged something of a squatters’ rebellion, serving free food and chanting anti-gentrification slogans, Mr. Hagemajer said.

Mr. Hagemajer took over and redesigned Bar Prasowy. Today, it has the same low prices and foods it did before the protest. But it is sleek and hip. Eastern Bloc-era accessories dot a modern interior. Much of the produce comes from local farmers.

“I am fond of Polish cuisine, but it’s vanishing,” said Robert Witecki, its chef. “Too often, people go to fast food restaurants. No one else wants to keep the tradition alive.”

Mr. Hagemajer added, “We wanted to create a place that was modern, one with roots in Communism, but with a modern quality.”

Such yearnings are not unique to Poland. In fact, “Red nostalgia” has swept across the former Warsaw Pact countries. In what was East Germany, “ostalgie” — a portmanteau of the words for “east” and “nostalgia” — is alive and well in tourism, fashion and nightclubs. In Bulgaria, many women yearn for a time when they were compensated by the state for domestic work.

“It is a kind of longing for the kind of sociality that existed under socialism, a feeling that these places represented a less-divided Poland,” said Kristen R. Ghodsee, a professor of Russian and Eastern European studies at the University of Pennsylvania, who has written extensively on the subject.

Some this is pure performance: Many milk bar patrons born after 1989 come as historical voyeurs, hooked on a bygone aesthetic.

“They have a certain feel of coolness about them,” said Dr. Parasecoli of N.Y.U. “It’s the hipster projection of what the milk bar experience was. They can look at it with detachment and irony because they didn’t live through a time when the milk bar was a necessity.”

But there’s something else. Milk bars are not just peddling a fantasy of the past: The cuisine is an intimate tie to Polish cultural history.

For Michal Turecki, a food reviewer for the popular website Street Food Polska, a milk bar near his grandmother’s old apartment in Krakow is an essential part of his memories. The milk bar, Bar Mleczny Krakus, has served potato pancakes every Thursday, for as long as he can remember. Before his grandmother died three years ago, they would often go together. When she was sick, he got takeout for them to eat together in her home.

“If you want to taste real Polish home cuisine, it’s better to come here,” said Mr. Turecki, 33, slowly chewing those pancakes over lunch in February. “You don’t even get food like this at home.”

For many people opposed to the nation’s current far-right populist government, there’s a reluctance to fly a Polish flag or march in parades for the country, said Monika Kucia, a food writer and artist based in Warsaw.

“The word patriotic is complicated, almost like a swear word,” Ms. Kucia said.

According to her, the foods served at a milk bar are a less fraught way for diners to celebrate Polish identity and history, without being accused of nationalism.

“It’s a reminder of who we are as a society,” said Agata Pyzik, a cultural critic who has written about milk bars. “When people tuck into their pork chop and mashed potatoes and mushroom soup, they remember why they’re Polish.”