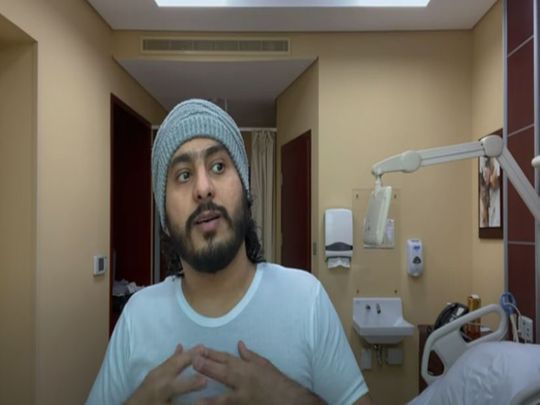 Emirati actor Ebrahim Al Mreasy has shared his journey of testing positive for the coronavirus in a new video uploaded to YouTube.

The vlog-style video, which has more than 1 million views so far, begins with Al Mreasy wincing as he undergoes a deep nasal swab test, making his eyes water up.

Al Mreasy talked about feeling some signs, especially in his nasal passage, though he said he did not have a noticeable cough.

“The other symptoms were that I could not smell and I could not taste what I was eating,” he said.

Al Mreasy’s video blog jumped forward to two days later, when he was discharged from the hospital.

He said he was asked to sign a paper, in which he agreed not to leave his room at home for two weeks.

He also said his only ‘friend’ and comfort during his hospital stay was the Holy Quran, which he read in order to feel relief.

“Stay home. That’s the biggest hope for you and your family,” he advised viewers. “You saw my experience and I hope you will not have to go through the same thing.”

The video ended with several other people who said they had been infected with the coronavirus and asked others to stay home to protect their community, including Al Mreasy’s younger brother, Omar.