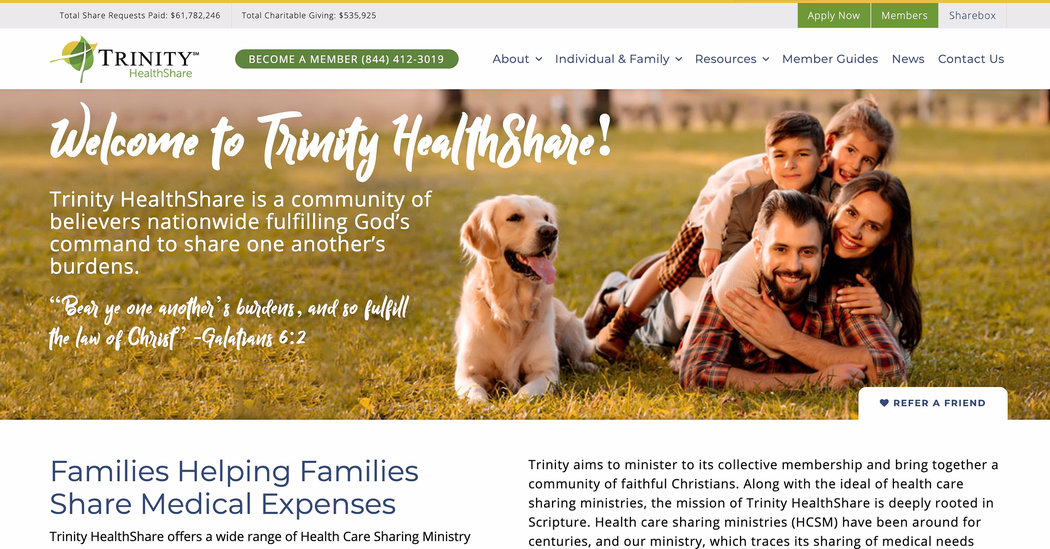 A major Christian group is being sued by former customers in at least three states who claim it sold them an alternative to health insurance that misled them about protections against large medical bills.

Numerous insurance regulators, including in New York, are trying to stop the group from offering the plans in their states.

The most recent lawsuit, filed last week in federal court in Missouri, accuses Trinity Healthshare, the Christian group, and Aliera, the for-profit company that markets the plans, for having “sold inherently unfair and deceptive health care plans to Missouri residents, and failed to provide them with the coverage the purchasers believed they would receive.”

The plans were developed “to look and feel like health insurance that would provide meaningful coverage for the purchasers’ health care needs,” according to the lawsuit.

Earlier this month, New York State wrote a cease-and-desist letter to the companies. Nearly 8,000 New Yorkers are currently enrolled in the group’s plans, and regulators are concerned that the coronavirus crisis could lead people who recently lost insurance when they lost their job to pick one of these plans rather than find one through the state insurance marketplace or enroll in Medicaid.

“Trinity, Aliera and its subsidiaries continue to operate in New York without a license, depriving New Yorkers of important benefits when they are most needed,” said Linda A. Lacewell, the state’s superintendent of financial services, in a statement. “The department will use all the tools at its disposal to crack down on those who mislead or deceive New Yorkers, especially during a pandemic.”

Both Trinity and Aliera say there is no confusion about what they are offering. Trinity says its Christian health-sharing ministry programs “are not insurance, and prospective and current members are advised expressly and repeatedly that Trinity neither provides insurance nor guarantees payments.”

Aliera says its marketing materials “make a point of stating very clearly that these programs are absolutely not insurance.”

“With health insurance premiums and unemployment skyrocketing, as well as the ever-present threat of Covid-19, it’s deeply disturbing and disappointing to see any state regulator working to deny their residents access to the affordable health care options that health care sharing ministries offer,” the company said in a statement.

More than one million Americans have joined Christian groups in which they agree to share their medical expenses with other members. People are attracted by prices that are far lower than the cost of traditional insurance policies, which must meet strict requirements set by the Affordable Care Act, like guaranteed coverage for pre-existing conditions.

The Christian groups can offer low rates because they are not classified as insurance, and are under no legal obligation to pay medical claims. Some people have paid hundreds of dollars a month, and then have been left with hundreds of thousands in unpaid medical bills in several states where the ministries, which are not subject to regulation as insurers, failed to follow through on pooling members’ expenses.

With millions of Americans now without health insurance because they lost their jobs, critics of these plans worry they will turn to these alternatives without realizing they do not provide adequate protection.

In the current environment, “people will be desperate for health coverage, and they might sign up for things that look at first blush like a cheap deal,” said Eleanor Hamburger whose firm, Sirianni Youtz Spoonemore Hamburger, brought the three lawsuits and is seeking class-action status for them.

“We’ve fielded calls about Aliera from all over the country,” she said.

In an interview, George T. Kelly III, the Missouri man bringing the suit against Trinity and Aliera, said he and his wife were looking for plans when an insurance agent told them he “had a good deal for us.” In 2018, he signed up for the plan and paid “contributions” of $344 a month. But he discovered that the plan would not pay for any of his medical claims, including hernia surgery.

“They were just denying it,” he said. Mr. Kelly eventually went to an out-of-state surgery center where he could pay cash.

Jay Angoff, a former federal health official and state insurance regulator who is one of the lawyers representing Mr. Kelly, said people are being misled by Aliera and Trinity. “On the one hand, they state, sometimes in small print, that they’re not insurance,” he said. “On the other hand, they convey the impression they are insurance.”

“They avoid any kind of state insurance department regulation,” which would make sure they have enough money to pay members’ claims, he said.

Unlike an A.C.A. plan that must spend 80 cents of every dollar collected in premiums on medical expenses, these plans spend a much smaller fraction, Mr. Angoff said. In its 2019 final investigative report, Washington State found less than 20 cents per dollar was being reserved for members’ medical expenses, with the overwhelming portion of the money going to Aliera.

Aliera says members are responsible for sharing one another’s costs and share much more than 20 percent of the expenses.

“The vast majority of Trinity members are very satisfied with Trinity’s ministry, and continue to choose Trinity as a cost-effective means for sharing medical expenses,” the Christian group said.

Like Washington, numerous states have taken action against Aliera. The company, which is based in Georgia, was the subject of an investigation by The Houston Chronicle. The Texas attorney general sued Aliera last year to stop it from offering “unregulated insurance products to the public,” and several regulators, including those in Colorado, Connecticut and Washington, followed suit.

Trinity says it has stopped offering its plans in New York, and is working with state regulators to address their concerns. “Several state departments of insurance have raised matters with Trinity based on the unsubstantiated and incorrect conclusion that Trinity is engaged in the unauthorized business of insurance in their states,” the group said in a statement, adding that “it is prepared to defend its compliance with the various state laws.”