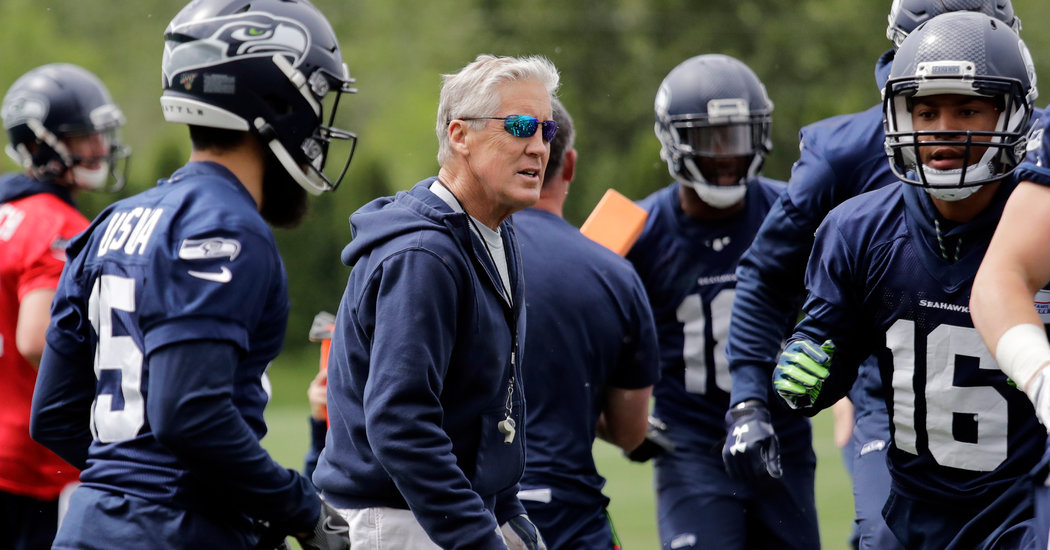 In any other year, N.F.L. facilities across the country would be buzzing this week, when teams are allowed to begin their off-season workout programs, the first organized football activities since they ended the prior season.

Normally, this is a time when teammates are reunited for workouts and position meetings. Coaches get their first in-person look at free-agent signees, and trainers assess how injured players are recovering.

But like nearly all other nonessential businesses in the country, N.F.L. teams are in lockdown, with all coaches, players and staff working from home. This has thrown one of the most critical stretches of the league’s calendar into flux, and forced the N.F.L. and its players’ union to develop a host of rules changes. Teams have scrambled to adapt to working from home, and the coronavirus advisories have put the N.F.L. at the mercy of government and health officials.

Unlike other pro sports leagues, whose seasons were fractured by the pandemic, the N.F.L., despite the turmoil, has had an easier time so far. Its first game isn’t until Sept. 10. Still, the league and the N.F.L. Players Association had to create one set of guidelines for 32 teams, 2,000 players and hundreds of coaches, trainers and other staff.

“We’re going to treat all 32 teams the same way,” Jeff Pash, the N.F.L.’s general counsel, told reporters last week. “We’ll do it in a way that does preserve competitive equity.”

The league said its three-week virtual off-season, which is voluntary for players, would include classroom instruction with digital playbooks as well as workouts and nonfootball educational programs. The league has given teams the autonomy to organize their own training sessions and classes. They can send players workout equipment worth up to $1,500.

Without in-person accountability, the remote work will compel teams to determine how to validate that players have participated. Players who take part in the virtual off-season minicamps and workouts will receive $235 per day. But players who are eligible to earn additional off-season workout bonuses, which can be worth hundreds of thousands of dollars, must take part to be paid. Teams specify a percentage of workouts that players must complete to receive contract bonuses.

Teams are also facing the prospect of losing out on the intangible interactions that can unite players ahead of a long season.

“We’re going to miss that camaraderie, the badgering that goes back and forth, and the direct communication with the coaches, teammates who lean over and whisper to help out on a play,” John Schneider, general manager of the Seattle Seahawks, said.

Schneider said he was trusting players to follow the workouts given to them by the strength and conditioning staff members, who are emphasizing flexibility and core strength.

“This isn’t going to be a virtual workout that we monitor,” he said. “In this day and age, these guys do such a good job taking care of themselves anyway.”

The Seahawks, like other teams, are focused on having coaches meet online with players, individually and in groups. That starts with meetings by position, as well as meetings for offensive, defensive and special teams squads. As he does when the Seahawks are together in Renton, Wash., Coach Pete Carroll will drop in on different meetings during the day.

Peter Ruocco, senior vice president for labor relations at the N.F.L., said teams could also send players video to watch. Teams can work with players online for two hours a day within a four-hour window, from 11 a.m. to 3 p.m., Eastern time.

“They can also take two hours where they would identify, OK, here’s the time frame that you will be participating in club-directed activities,” Ruocco said last week. “That would be classroom activities, or if they are doing a virtual workout, they could direct them for the virtual workout. But it could be either-or, it could be live or it could be taped.”

One question left unanswered is how the league will monitor teams to ensure they do not ask their players to do work outside the established guidelines.

“Teams try to get every competitive advantage they can get,” Gabe Feldman, the director of the Sports Law Program at Tulane University, said. “The players may have too much time on their hands, but also the teams could load up the players with too much work.”

After the first part of the virtual off-season ends on May 15, teams that took part can continue for another six weeks. If state governments do not lift their stay-at-home orders by then, teams will have to continue working virtually. To maintain fairness, if even one N.F.L. team is unable to reopen its facility, then all franchises will have to continue following the virtual off-season guidelines.

This requirement, while entirely understandable, means the league must follow the instructions of health officials in the 24 states where its teams train. The challenge for the N.F.L. is that while the number of cases appears to be cresting in cities like Seattle, it is rising in other N.F.L. cities, including the smallest, Green Bay, Wis.

The wave of hot spots in N.F.L. cities makes it more likely the league will have to extend its virtual off-season training program past May 15, and force the league to yet again adapt to circumstances out of its control.