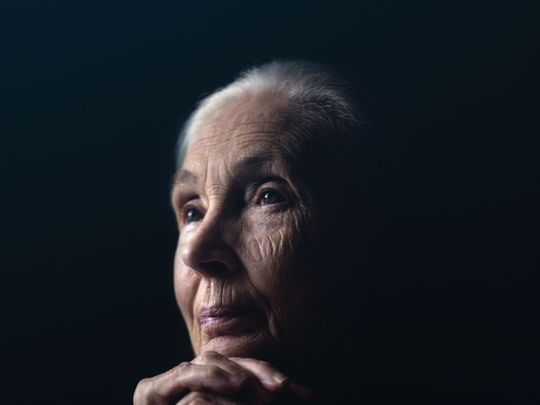 It was 60 years ago when a young Dr Jane Goodall set foot into the Gombe Stream National Park in Tanzania and changed the way the world would look at primates.

Aged 26, with nothing but a love for animals and childhood stories of Tarzan and Dr Doolittle driving her, Dr Goodall’s discovery that chimpanzees make and use tools just like humans shook the foundations of modern science, revolutionised the world of primatology and redefined the relationship between people and the rest of the animal kingdom.

In these six decades, Dr Goodall has become the driving force behind animal conservation efforts, achieving what 17-year-old Great Thunberg is doing today for climate change, without the aid of ample press coverage and social media.

As a United Nations Messenger of Peace and a founder of the Jane Goodall Institute, along with the global conservation non-profit and Roots & Shoots youth-empowerment programme that also has a chapter in the UAE, Dr Goodall travels an average 300 days per year sharing her reasons for hope and message that we can each make a difference to create a better world for all, every single day.

With April 22 marking Earth Day, the primatologist returns with yet another message through her National Geographic documentary, ‘Jane Goodall: The Hope’ one that comes with a certain urgency as the world reels from a global pandemic.

“Being out in the forest of Gombe, I had a great sense of spiritual awareness; I began to realise that everything is interconnected,” said Goodall. “Since then, every day, it’s become clearer that climate change is an existential threat to our natural world, and if we destroy this world, we destroy our own future. Each day, every single person has the chance to make an impact through small, thoughtful choices, and when billions of people make the right choices, we start to transform the world. Don’t give up; there’s always a way forward.”

The film, which premieres in Abu Dhabi on April 22, features Prince Harry, The Duke of Sussex, among other notable environmentalists, who unite to aid Dr Goodall in her journey to heal Earth before it is too late.

Ahead of the airing, Dr Goodall spoke with Gulf News exclusively about her hope for the planet, especially with COVID-19 bringing the world to its knees.

Let’s first start by saying that we hope you are keeping safe during this global pandemic.

I’m doing okay. Fortunately, I was in the UK when it happened. I was nearly in Abu Dhabi. You know, I’m very fond of being in Abu Dhabi, but I wouldn’t want to be locked down there for three months away from all my belongings and things. So here I am in the UK, busier than I’ve ever been in my whole life.

I’m not able to travel, but virtually, I’m being asked to give interviews, and podcasts, and online lectures, and lots and lots of emails, and Skype and you name it. I’ve never been so busy ever.

Well, at least the world remains connected through technology. We’ve had a three-week long national sterilisation drive that has kept us at home and if we didn’t have this connectivity, we wouldn’t have much going for us…

Well, I have plenty to do, but I want to keep up the momentum. I want to build up my endowment, so that when I die, programmes that I’m passionate about can carry on; programmes to understand and protect chimps and forests in Africa, orangutans in Asia and as well the Arabian Oryx and all of your other wonderful animals in the UAE.

As we celebrate the 50th anniversary of Earth Day on April 22 with your special documentary, ‘Jane Goodall: The Hope’, also premiering on National Geographic, what are three things that you hope for the planet with a global pandemic at our doorsteps?

The greatest hope is that we come to our senses and understand that this pandemic is caused by our lack of respect of the natural world, as we invade animal habitats…. Different species that wouldn’t normally interact very much were forced to move out into human habitation because of having to find food as we destroy their forests. And that’s how these diseases jump from one animal to another and from that animal to a human.

They have started in the meat markets. They start because of the wild animal trafficking. Certainly, that’s illegal, but people still do it. They have pet lions and tigers and chimpanzees and this is how these viruses, the zoonotic diseases, jump from one species to another.

So, what I’m hoping is one, we learn a better respect for nature and realise the consequences of the harm we’re inflicting.

The third thing I hope is that we begin to understand that just like us, animals have personalities, they have minds capable of problem solving and above all, they have emotions. They can feel happy and sad. They can feel fear and of course, pain.

We’re sure you’ve encountered naysayers who ask, ‘what can I do to bring about that change or make a difference?’ What would you say to such people, especially in light of what you have managed to achieve in your career or what someone as young as climate activist Greta Thunberg is currently single-handedly achieving for climate change?

It depends. You, as a journalist have a huge responsibility in what you tell stories about. One problem has been the media tends to — as it has to — tell all the bad things that are happening, but what people need is hope.

As I’ve travelled the world, I’ve met so many amazing people. I’ve seen so many projects where destroyed environments have been restored. I’ve seen so many cases where animals on the brink of extinction are being given another chance and these are the stories that I want the media to spend more time sharing, because these are what give people hope and if people everywhere lose hope, then, why bother to do anything if you don’t think that you can make a difference?

That’s a reality few can adapt to…

Actually, people have to understand that every day, each one of us makes some impact on the planet and we can choose what sort of impact we make — what do we buy, what do we eat, what do we wear, where did it come from? Did it cause suffering to animals like the factory farms which also gave rise to illnesses? If we start making ethical choices, then we move towards a better world.

While hearing you speak just now, and going by your documentary, there appears to be this sense of urgency in your words. Is time really running out for us?

Time is running out. You only have to look at the effects of the climate crisis around the world and this is what science has been predicting for many, many years. And this pandemic has been predicted for many, many years but some politicians have tended not to listen to the scientists and sometimes to outright claim that the scientists are talking rubbish, because these politicians with their relationships with corporations, want to continue business as usual to go on making money, to go on gaining power, and the consequence of that is that they are stealing the future of our children.

You have such a rich legacy that you have built in these 60 years since you set foot in the rainforest reserve in Gombe, Tanzania. If you had to do it all again, is there anything you would do differently?

Actually, no, not really. Of course, I made mistakes, but looking back on those mistakes, I learnt from them. Today, nobody would go out in the field and start a feeding station as we did, but back then, that was normal….

We didn’t realise back then that chimps could catch all our diseases and my goal was to study differences between individuals, not just species.

Yet, there was a lot of criticism over how you approached the animals, even giving names to the chimpanzees you were studying…

Within the banana tree, they could all behave differently or the same and in addition to that, it was because the chimpanzees came close, which was how Hugo [one of the chimpanzees Dr Goodall studied] could get his amazing documentary footage and that’s why the National Geographic agreed to fund the research.

If I hadn’t made what today would be considered a mistake, then there would be no chimps. People would have moved into Gombe, as they were trying to do now. It would not be there anymore. So, the mistake was a good one.

Has your extensive work with chimps taught you anything about human behaviour?

It has taught me that the link between us and them is very, very close. Chimps, like us, can show brutality and even a kind of primitive war. They can kill each other, but likewise, they also have a loving, compassionate and truly altruistic side. So, it helps us to understand that we are not the only beings, as I was once told, who have personalities, minds and emotions. Now that science has expected that, the door has opened to look for these characteristics in other animals.

We now find that rats are amazingly intelligent. They have strong personalities. They laugh when you tickle them. They jump for joy. They will actually show altruistic behaviour towards suffering fellow rats and yet we treat them like vermin. And we now know the octopus is capable of amazingly intelligent behaviour and that some birds are as intelligent as an 8-year-old human in some respects.

So, it was the chimps that opened the door to a greater understanding of who animals are and that’s why, in light of this pandemic, it is so important to recognise the way that they’re treated today.

WHAT IS EARTH DAY?

In April 1970, millions of people around the world mobilised to demand protection of the planet. That historic day gave birth to the modern environmental movement known as Earth Day, and 50 years later it’s become the planet’s largest civic event, with more than a billion people participating each year. Although, this year, with the COVID-19 pandemic curbing the participation of its 193 participating countries, the conservation efforts have gone online with various ways individuals can be part of the change. Details are available on Earthday.org, its official website.

Before this, National Geographic Photographer Joel Sartore heads on a quest to photograph some of the rarest animals in the world in ‘Photo Ark: Rarest Creatures’, premiering at 8pm in the UAE.