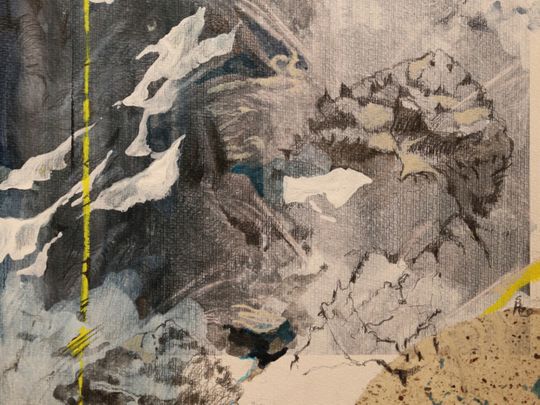 The spring exhibition at 1×1 gallery, ‘The Tapestry of Fading Gardens’, weaves together works by 16 Pakistani artists based in major art centres such as Lahore, Karachi and Quetta as well as more remote areas to present a rich tapestry of contemporary art across the country.

The most striking work in the show, ‘When You Had Enough of Paradise!’, by Suleman, is a latticed steel curtain hanging down from the ceiling all the way to the floor. The repetitive pattern on the curtain is formed by figures of birds, some upright and some upside down, cut into the steel.

“The memory of violence is embedded not only in people’s bodies and minds but also on the landscape in the form of war memorials or monuments. The more heinous the crime the more beautiful the monument.

“In the same way I camouflage violence with beauty. This monument-like structure is a symbol of pain and deaths caused by war, bombings, unlawful killings and fake encounters by police. Birds represent freedom, sacrifice, resurrection, the soul or death in different cultures and mythologies, so I have dedicated a sparrow, the most common bird in Karachi to each death. The birds make a pattern that repeats itself infinitely reflecting the endless violence around us,” says Suleman.

Baghpati has also used metal, but his work is playful. The artist collects discarded domestic objects and decorative items and transforms them into hybrid sculptures such as a copper kettle with animal horns, or a vinyl dog with a brass decorative piece for a head.

By giving a new life to these discarded, often obsolete objects, he brings memories of the past and diverse cultural histories into a contemporary context.

Ausaf’s medium of choice is textile. She uses the traditional technique of weaving on a hand loom to create contemporary interpretations of artisanal designs. Haider also uses weaving to create colourful artworks from strips of handmade wasli paper.

Waqas uses wasli paper in a different way to create eye-catching works that look like mechanical devices but appear fragile and draw viewers into deep mysterious portals in the centre. The artist has always been fascinated with the mechanics of aeroplanes and the details of engines and was inspired to draw them during his childhood.

He went on to become a pilot and aircraft mechanic to fulfil the expectations of others but felt limited and constrained by this profession. His intriguing sculptures created from silver and gold leaf and 14 layers of wasli paper covered with a mix of mechanical and arabesque drawings express this internal conflict between the artist and the mechanic in him and symbolise the inner struggles we all deal with.

“Doing something I was not really sure about created conflict, confusion and a clash of ideas in my mind. I wanted to escape but was not able to fully shun what had been planted in my mind. My work is about compromises and conflicts within a personality, between idea innate and idea implanted, and the damage to the personality and the idea itself,” Waqas says.

She also constructs imaginary, labyrinthine yet walkable pathways that bring together cities that were once linked by trade, culture and geography. On the other hand, Ahmad explores universal identity and the human condition that transcends borders through a series of ink drawings titled, Fractured Cosmos featuring web-like patterns that are common to the human body, nature and the cosmos.

Alamee’s calligraphic works are inspired by the ancient Persian siyah mashq style and the timeless verses of great Eastern poets such as Rumi, Faiz, Ghalib and Khusro; whereas Ruheel has used calligraphy to depict the pauses between words and unspoken thoughts and emotions.

A 3D virtual tour of this exhibition in 1×1 gallery is available at alserkal.online