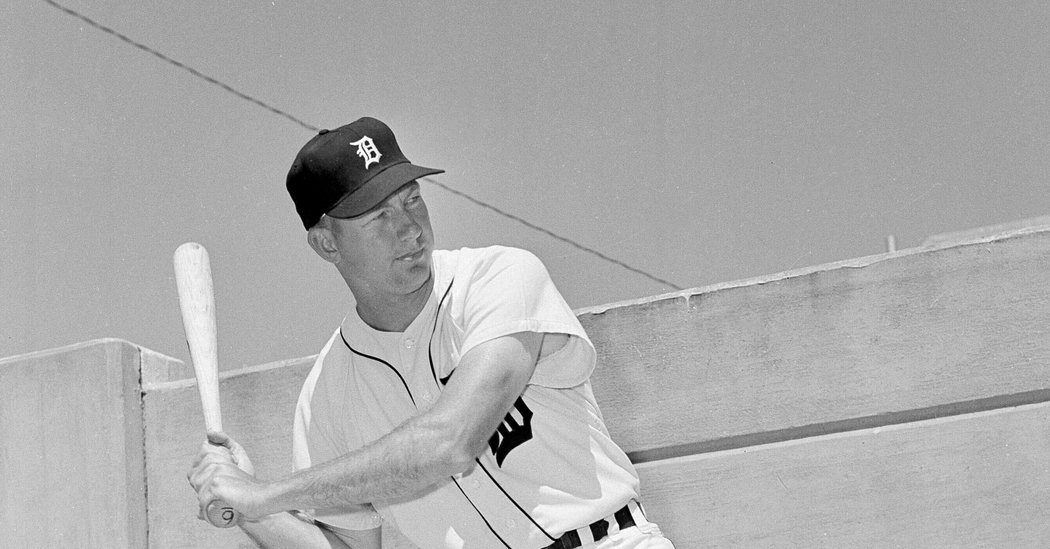 Funny how sometimes you remember most saliently a particular instance — perhaps a little thing, an otherwise unnoticed moment — that illuminates, or symbolizes, the whole.

And so it is with me in regard to Al Kaline, the Hall of Fame outfielder, 18-time American League All-Star, 10-time Gold Glove winner for fielding excellence, who died on Monday at age 85, and who played his entire 22-year career with the Detroit Tigers, from 1953 to 1974.

I recall one afternoon his running out a double, usually an unremarkable event. As he raced down the first-base line, rounding the bag and then heading for second, he did it with such lightness of foot, with such grace and swiftness, that upon observation it seemed his spike marks would be no deeper in the dirt than those of a bird’s imprint.

Billy Martin, who played for the Tigers in 1958, once said: “I have always referred to Al Kaline as ‘Mr. Perfection.’ He does it all — hitting, fielding, running, throwing — and does it with an extra touch of brilliance.”

“You have to watch him every day to appreciate what he does,” said the pitcher Johnny Podres, once a Kaline teammate.

Kaline never spent a day in the minor leagues. He received a $15,000 Tigers contract when he was an 18-year-old senior at Southern High School in Baltimore, signing on his prom night. He became a Tigers regular the following season, and when he was 20 years old, he led the majors in batting with a .340 average, becoming the youngest batting champion in history.

Kaline began playing baseball when he was 9, and by age 12, he was considered a prodigy, in the way Itzhak Perlman was as a violinist, or Picasso as a painter.

Fifty-one years ago, in the summer of 1969, I sat with Kaline before a game in the home dugout at Tiger Stadium. It was his 17th season in the big leagues. At age 34 and 6-foot-2, he was lean and hard-muscled. There were light tufts of gray in his brown sideburns under his navy blue baseball cap. As I recall, I asked him about his longevity, still playing at an all-star level. His answer surprised me.

“Sometimes I wonder what I’m doing, if I’ve wasted my time all these years,” he told me, his eyes thoughtful. “And sometimes I think I have.

“I would like to have more to contribute to society. I don’t know, maybe a doctor. Something where you really play an important part in people’s lives.

“But I never had much education. I had always wanted to be in the big leagues, since I was a kid. And boom — I was there before I knew it.”

“Once in a while I’ll sit in the dugout and look out on the field and wonder: What good is all this, thinking about me, me, me, my batting average, my fielding average? Oh sure, you care about the team. You have to. But in the end you’re worried about you.

“So I have to think of myself as an entertainer, really. Maybe kids can draw inspiration from what I do. Maybe people who come out to the park can forget their problems for a while by watching me play.

“The difference between ballplayers and entertainers — actors like Richard Burton or Marlon Brando — is that actors do different things — comedy, drama, musicals, television, movies. A ballplayer just plays ball.

“But don’t get me wrong. A ballgame is never a bore to me. Oh, geez, it’s great. I love it. Every day there’s something new — the different situations, the different pitches.”

“You know, I was a very good outfielder. I’m still a good outfielder, but I don’t run as fast as I used to and I don’t throw as well. And I beat out 12-14 hits a season in the hole at shortstop. Now I’m lucky to beat out one or two a season.

“I feel great so far this season. But the hot weather is coming, and that tires me some. I’ll play next year for sure. After that, I don’t know. I’ll sure miss baseball and the people in it. And when I’m done and gone, I think I would like for people to say, ‘Al Kaline? He was a real good outfielder.’”

Kaline played five more years, retiring at 39 with a career batting average of .297, 3,007 hits, 399 home runs and 1,583 runs batted in. He was elected to the Baseball Hall of Fame on the first ballot in 1980. He spent much of the rest of his working life as, first, a Tigers’ broadcaster and then as an assistant in the Tigers’ front office.

Yes, history will show — has shown — that Albert William Kaline was indeed a “real good outfielder,” but it will also show that he was irrefutably a wonderful entertainer, right up there with Burton and Brando.

Ira Berkow is a former New York Times sports columnist. His forthcoming book, “How Life Imitates Sports: A Sportswriter Relives, Recounts and Reckons with 50 Years on the Sports Beat,” is scheduled for release in August by Skyhorse Publishing.