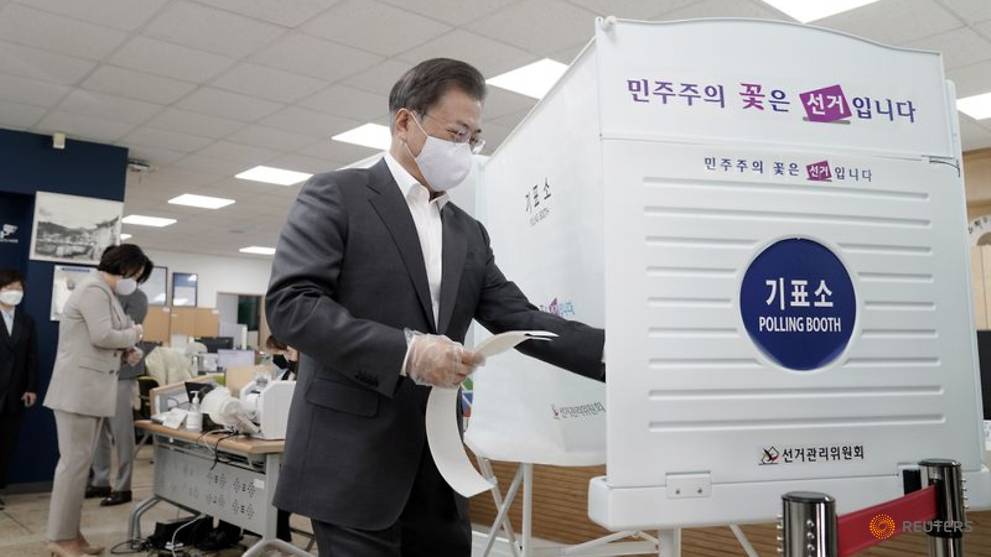 The National Election Commission (NEC) set up eight polling stations to be used by more than 3,000 coronavirus patients receiving treatment as well as 900 medical staff at treatment centres in hard-hit areas, including the capital Seoul and Daegu city.

The election itself is on Apr 15, but officials are hoping that people will take advantage of early voting options to reduce the number of voters crowding polling locations on that day.

There are 3,500 stations for voters to cast their ballots during two days of early voting starting on Friday.

Polling stations were disinfected on Thursday ahead of opening, and all voters are required to wear a mask, use sanitisers and wear gloves. Officials conducted temperature checks at the entrance and anyone showing a temperature higher than 37.5 degrees C was directed to special booths.

South Korean President Moon Jae-in cast his ballot on Friday at a polling station near the presidential office Blue House.

The government is still debating plans to allow about 46,500 people who have not tested positive but are in self-quarantine to vote.

“Those in self-quarantine should also be ensured their right to vote. The concern is how to minimise the risk of further infection during the voting process,” Vice Health Minister Kim Gang-lip told a briefing earlier.

Experts said the government is looking to allow the quarantined people to vote after the polls close at 6pm on Apr 15.

The Korea Centers for Disease Control and Prevention (KCDC) reported 27 new coronavirus cases on Friday, bringing the national tally to 10,450. A total of 7,117 people have recovered from the virus, while 3,125 are still receiving treatment. The national death toll rose by four to 208.

Candidates who began the official campaign period earlier in April have been wearing masks and exchanging fist bumps in individual meetings, shunning the usual handshakes and large rallies.

“Since this is a time to maintain social distance due to coronavirus, we are refraining from large rallies as much as possible and also limiting personal contact during campaigns,” said Lee Nak-yon, a former prime minister running for the parliament said.