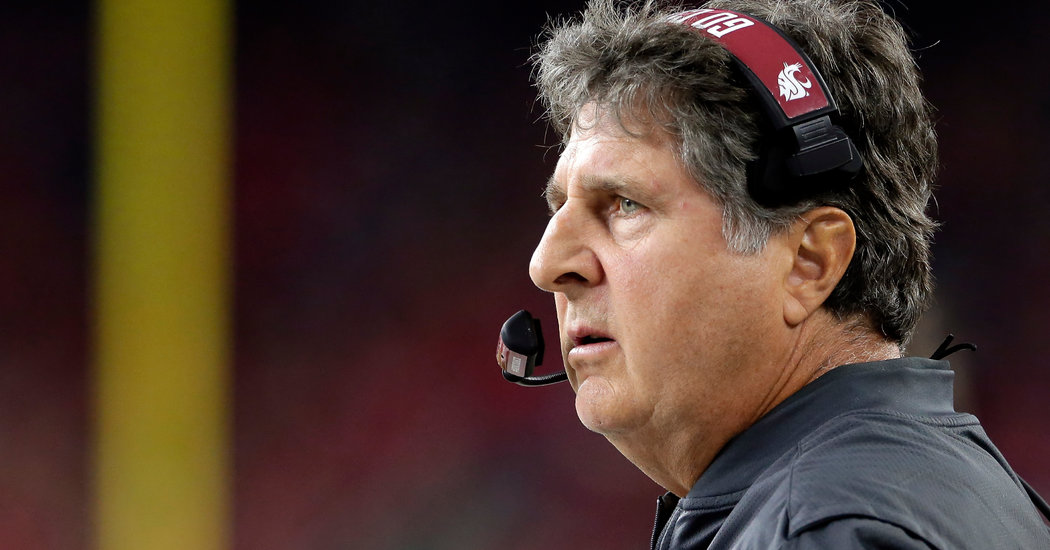 Mike Leach has not yet coached a football game at Mississippi State, but he has already undermined the university’s long-held reputation for progressivism through athletics in a state with a painful racial history.

After sharing a meme on Twitter of a woman knitting a noose, Leach, 59, this week was ordered by university officials to undergo sensitivity training, including museum visits and “listening sessions” with students, alumni and community groups. At least one player has said he will transfer because he considers Leach’s apology insincere and the university’s response insufficient.

“That’s the prime example of why I need to leave Mississippi,” the player, Fabien Lovett, said.

Leach, who was hired from Washington State in January, ignited the controversy last week with a coronavirus-related meme — which he later deleted — that featured a black-and-white image of an older white woman with knitting needles. The caption read, “After 2 weeks of quarantine with her husband, Gertrude decided to knit him a scarf.”

But the woman was knitting a noose, not a scarf, evoking the Deep South’s brutal history of lynching black people. Leach apologized the next day with a tweet that said: “I sincerely regret if my choice of images in my tweets were found offensive. I had no intention of offending anyone.”

The apology did not sway Lovett, 20, a defensive tackle from Vicksburg, Miss. Lovett said on Wednesday that he planned to transfer to another school.

“We’re in the South,” Lovett said. “We’re in Mississippi. Stuff like that plays a huge role in our family, especially black men. Our ancestors were lynched.”

Mississippi State declined to make its president, Mark Keenum, available on Thursday and did not respond to requests to interview Leach and Mississippi State’s athletic director, John Cohen.

Cohen said in a statement this week that the university was disappointed in Leach. “No matter the context, for many Americans the image of a noose is never appropriate, and that’s particularly true in the South and in Mississippi,” Cohen said.

Leach’s tweet conflicted with a history of broad-mindedness at Mississippi State on matters of race and sports, sometimes amid tension and unease over desegregation. In 1963, its all-white men’s basketball team famously sneaked out of the state, defying Mississippi’s segregationist governor, to play an N.C.A.A. tournament game — now known as the Game of Change — against Loyola of Chicago, which started four black players.

In 2003, Mississippi State became the first university in the Southeastern Conference to hire a black head football coach, Sylvester Croom. Its powerful women’s basketball team, with a coaching staff and a roster consisting mostly of women of color, reached the national championship game two of the past three years. The team was highly ranked again when the 2020 N.C.A.A. men’s and women’s tournaments were canceled because of the coronavirus pandemic.

Mississippi State responded exactly as it should have in condemning Leach’s remarks and insisting on sensitivity training for him, said Daniel W. Jones, a former chancellor of the University of Mississippi during a period when several school leaders barred Confederate symbols and the song “Dixie” from sporting events there.

“I don’t think that a single coach coming from outside of the Deep South, who doesn’t have an appreciation for how sensitive lynching is here, is going to put a black eye on the university,” Jones said. “I think it puts a black eye on that coach. He’s going to have to be sensitive to those issues. And being sensitive is not one of his strengths, on the record at least.”

Jones said Leach had always been known as a lax speaker. “And being loose with words about some things in Texas and Washington state are very different than the mistake he made here in Mississippi,” he said.

Leach previously coached at Texas Tech as well as at Washington State. He is known for his innovative passing offense and his infatuation with pirate lore. His offbeat, garrulous nature has produced humorous remarks but has also landed him in hot water with university officials as he clumsily balanced his public position as a football coach with his private political views.

In February, weeks after being hired at Mississippi State, Leach made critical remarks on Twitter — and then deleted them — about Senator Mitt Romney of Utah, the only Republican to vote to convict President Trump during his impeachment trial. One tweet from Leach, who is a Trump supporter, said, “As an American, does ANYONE, REALLY want Mitt Romney on their side?!”

In 2018, while at Washington State, Leach tweeted a doctored video that falsified remarks by President Barack Obama. University officials ultimately said the incident cost the school as much as $1.6 million in lost donations.

And now Leach has undercut Mississippi State’s efforts to combat racism through classroom instruction, a lecture series and diversity workshops and training, said Margaret A. Hagerman, an assistant professor of sociology who studies race at the university.

“I think to not understand the symbolic racial violence of an image of a noose in Mississippi reflects either a lack of education about racism or a lack of concern,” Hagerman said. “I hope it’s the former, because that can be changed.”