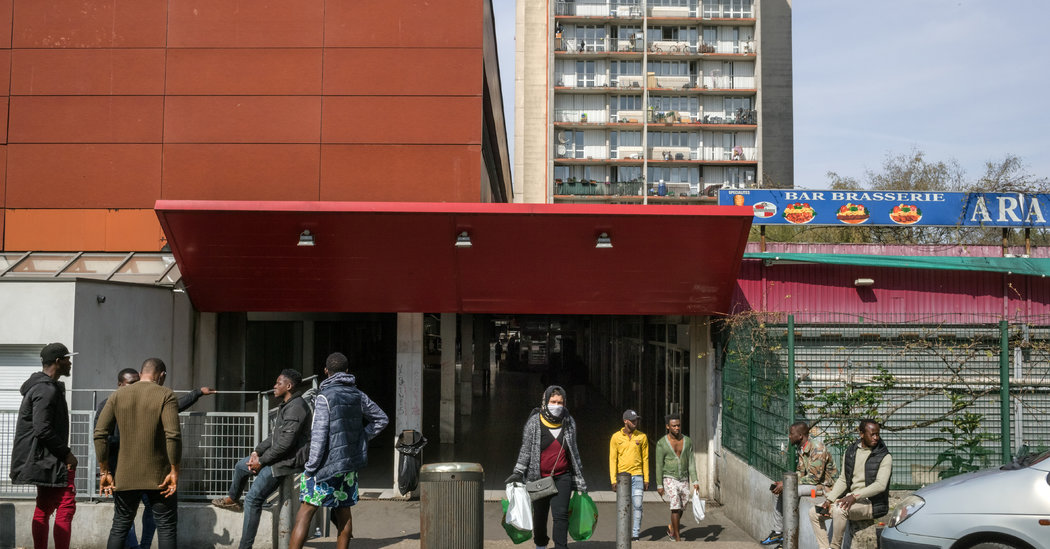 CLICHY-SOUS-BOIS, France — The young men, immigrants with no papers and nowhere to go, chatted at close quarters outside the shopping strip, social distancing be damned. Above loomed the shabby facade of one of France’s most notorious housing blocks, packed with families waiting out confinement.

The pain of the moment is concentrated in this dense, impoverished district of the Paris immigrant suburbs, one of four French areas, including Paris and Alsace, hit by “an exceptional excess” of coronavirus deaths, France’s national health director said this week.

Much of Paris — perhaps a quarter of the population — packed up and went off to the countryside when the French government announced strict confinement rules on March 16. But just across the line in Seine-Saint-Denis, France’s poorest department, people didn’t have that choice. They don’t have country homes here.

Inside the Paris city limits, the streets are now as quiet as any French provincial town on a Sunday; in the suburb the streets are mostly empty too. But the apartments are full.

The grim and tired faces of the residents, lining up to get into the post office or the supermarket in the worn shopping strip, tell the story: small public housing apartments packed with families, jobs that have disappeared, and an aggressive police force clamping down on youth restless with the confinement rules.

The combination of cramped quarters, acute economic stress and tough policing has made Paris’s poorer suburbs a more dangerous place for the virus to spread, as well as a special source of tension during the epidemic.

Relations between residents and the police, with their undercurrent of racial discrimination, are often fraught even in the best of times, and the current lockdown is not one of them.

Over and over, residents compared the confinement rules to a prison, and they charged that the police were taking advantage of their mandate to keep the streets clear by harassing, even beating, youths, no questions asked. Some are warning that the pressures are ripe to explode.

“We’ve got a lot of young people in big families, shut up in tiny apartments, and it’s difficult to close them up like that,” said Bilal Chikri, a filmmaker who lives in the neighborhood. “There’s a lot of clashes with the police, lots of police missteps, lots of abuse of power.”

The approach has left residents vulnerable to both the police and the virus. Paris had 732 virus deaths compared with 402 in Seine-Saint-Denis as of April 8, but the city has half again the population of the suburb, where many of the metropolis’s cashiers, deliverymen, transit workers, nurses and couriers live.

“This is getting really tough. We’re actually in prison here,” said Larry Karache, an out-of-work shopkeeper, standing outside in Chêne Pointu, the housing project where France’s 2005 urban riots were born and which was depicted in last year’s hit film “Les Miserables.”

“People can’t support their families anymore,’’ he added. “And with the cops now, it’s all about score-settling.”

The stresses, from a lack of money and small spaces, were accumulating.

“It’s like a prison. There are three of us in two rooms,” said Drissa Fofana, an out-of-work construction worker. “But we’ve got to accept it. If this goes on, the little that we’ve got saved up will be all gone,” he said.

Another resident, Mama Traoré, echoed the complaint. “It’s hard. I’ve got four kids and three rooms. Too small,” she said, grimacing as she bent over her shopping cart outside the post office at Chêne Pointu. “With all the noise, I’ve always got a headache.”

Outside the apartment blocks, small groups gather, here and there, mostly at bus stops. But the wide streets are largely quiet.

“On the whole, people are respecting the confinement rules. There isn’t a sort of collective indiscipline about it,” said Hamza Esmili, a sociologist who has studied the Paris suburbs. “But the illness has the potential to continue spreading,” Mr. Esmili warned.

The real danger comes not from people congregating outside, but from the cramped apartments where extended families are packed.

“On the exterior, the confinement is being observed,” said Frédéric Adnet, head of emergency services in the Seine-Saint-Denis department. “It’s not there that the problem is playing out.”

Paris had its exodus to country homes, but the suburb did not, rendering it all the more dangerous. “They don’t have country homes here,” Mr. Adnet said. “So we didn’t benefit from that drop in the population.”

In the last few days the pressure on the area’s three public hospitals has eased a little, officials said. But the tension inside the tired old apartment blocks is spilling out into the streets.

The French police have come down hard, in the accounts of several residents, responding to perceived lapses in the confinement rules with beatings, harassment, humiliation and intimidation.

A coalition of rights groups, including Human Rights Watch, denounced “unacceptable and illegal behavior” by the police in the Paris suburbs in a March 27 statement, saying the health crisis “doesn’t mean a break with the rule of law, and doesn’t justify discriminatory checks or unjustified force.” It noted that these abuses “are common, and rarely punished” in France.

A leading police union, in a post on Twitter, called the residents’ accounts “fables,” and blamed them on “little Dzerjinskis” who are “holed up in the Latin Quarter, or their country homes.”

But the accounts are consistent, widespread, and tied to the French government’s confinement rules. Since March 17 authorities have demanded a self-signed interior ministry release form giving one of four preapproved reasons for being outside.

In the Paris suburbs, if the police catch you without the form, or if there is an error on it, you are in trouble, residents said.

“The police just jump in, just like that, with force. There’s no discussion,” said Fiston Kabunda, who works as a mediator for the city of Clichy-sous-Bois. “It’s an abuse of power: ‘We’re going to beat up some black and Arab.’”

“Look, it’s like this: the police come, and they start to beat up on the kids,” he added. “They’re not even checking them. It’s brutality, no questions asked.”

A spokesman for the police prefecture of Paris, which is responsible for Seine-Saint-Denis, said the police would not comment on allegations that were “not specific.”

Mr. Chikri, the filmmaker, said he had forgotten his release form in his car when a group of police surrounded him last week, threw him to the ground, handcuffed him, kicked him, and squeezed his carotid artery. “You can stuff your release form,” the police told him, Mr. Chikri recalled.

“With these guys, it’s all hatred and violence,” he said.

The police in Paris did not respond to a specific inquiry about Mr. Chikri’s allegations.

In a video widely circulating on French social media, a young man in the suburb of Les Ulis can be heard screaming in pain during a police “check” for a missing release form.

“He was savagely beaten with truncheons, fists and kicks until he fell to the ground, but the punishment continued,” said a criminal complaint filed on behalf of Sofiane Naoufel El Allaki, a 21-year-old deliveryman for Amazon, by a Paris human rights lawyer, Samim Bolaky. “The screams of Mr. El Allaki penetrated the whole neighborhood,” the complaint says.

“This is not about confrontation,” said Mr. Bolaky. “This is not urban violence. The streets are deserted. They didn’t even ask him for his release form. He didn’t resist at all.”

The police in the Essone department, where the incident took place, did not respond to a specific inquiry about Mr. El Allaki’s claims. Mr. El Allaki’s case is one of several involving police violence being investigated by prosecutors.

Mr. Esmili, the sociologist, warned that the way the authorities were enforcing the lockdown was only reinforcing the worst expectations of many in France’s poorest areas.

“Look, the state is completely ignoring how people live in these neighborhoods,” he said. “Its only response to them is an excess of authoritarianism. And the people are beginning to understand, the only response is police force.”