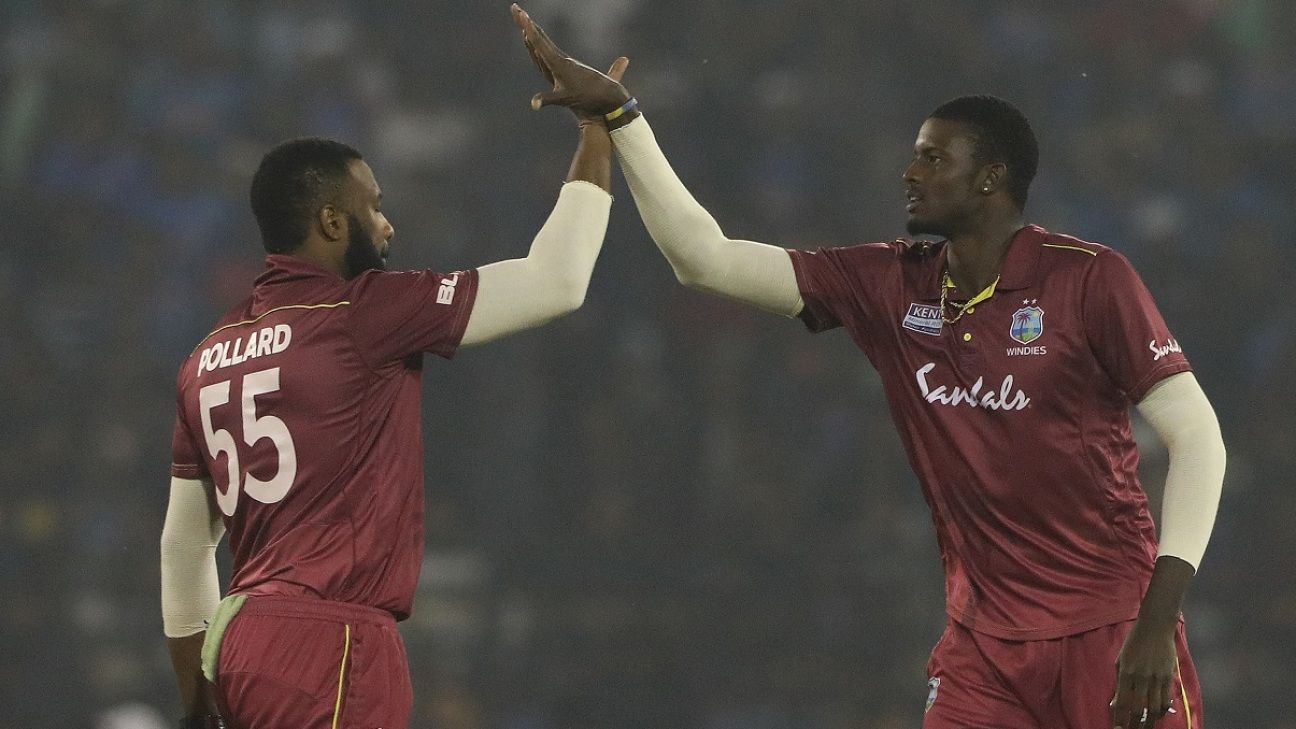 Jason Holder has admitted that it was “tough” for him to “transition” back to being a player in the ODI side after Cricket West Indies replaced him with Kieron Pollard as the white-ball captain last September. Although Holder remains the Test captain, his performances in ODI cricket post the 2019 World Cup have weakened, which he said also had to do with him batting lower down the order where he didn’t have enough time to settle before making an impact.

CWI had stated that one of the reasons behind Pollard’s appointment as the white-ball captain was to improve West Indies’ performances in limited-overs cricket, especially in ODIs where West Indies had finished ninth in the ten-team World Cup last year. But Holder was caught unawares by the timing of CWI’s decision.

Holder was just getting ready to lead the Barbados Tridents in the 2019 CPL when he was told of the news. “Yeah, it was an interesting time for me. I had found out earlier in the tournament that we have moved as one-day international captain. For me, it was just trying to win it [the CPL].”

Holder succeded, as the Tridents won the CPL with the captain finishing as the joint-third highest wicket-taker in the tournament.

“Performances obviously haven’t been there as I would’ve probably liked, but I’m not too disheartened,” Holder said. “I don’t beat myself up. I don’t get too worried because I know my ability. I know what I can produce. I just know that an innings is around the corner, a bowling effort is around the corner.”

Holder pointed out that the responsibility of leading West Indies in both Tests and ODIs, playing constant cricket across the three formats and also playing his maiden county season, for Northants, had taken a toll both physically and mentally. Holder had played 62 matches in 2019, the second-most by a West Indies player across all formats including first-class cricket, List-A and T20s.

“I felt I needed the break after the India series [in December] particularly, just to refresh,” Holder said. “I had played every single series in the entire year, I played county cricket as well, and my batteries needed a little bit of a recharge. Obviously, I needed some time to go and think about how I wanted to go forward as a player and try to work out again how just to be a player as opposed to being the captain.”

A cause for concern for Pollard and West Indies coach Phil Simmons was Holder’s lean form with the bat: he has scored just of 50 runs from six ODI innings after being dropped as captain. Holder has come in at No. 7 in five of those innings in contrast to his last 15 knocks as captain, when he had batted at No. 6 or higher 13 times.

Holder admitted he was still adapting to batting in the lower order, which was proving to be a challenge. “Certain situations haven’t really gone my way in terms of having an extended time to bat in one-day cricket, which I feel personally has contributed to me not having that [big] score. I’m a batsman who needs a little bit of a time to get in and then flourish. And I haven’t had many opportunities to get a solid knock. There hasn’t been much Test cricket going on as well too, which helps me a lot in terms of spending time at the crease.”

Holder said that he was helping Pollard wherever he could because “for me, the winner has to be the West Indies cricket regardless of who is captaining or who the administrators are.”

Holder said he was in “good spirits” and things would once again “fall back” in their place for him soon. “But, again, I’m not too disheartened. I’ve done a lot of thinking, I’ve done a few technical sessions trying to work through a few things that I wanted to correct. I’m in really good spirits. I know the performances will come and I’m just being as patient as I possibly can before that happens.

“I don’t think it’s long before you see me getting back to my normal self. I’m very, very confident. I don’t think it’s a question of my ability. I know my ability. It’s just performing and producing. As I said the structure and dynamics have changed and based on how things have gone, it is little to no time going in to bat. So I just have got to find ways to cope and produce in the short stints of batting at the international stage. I will work it out. I am confident it will all fall back into place.”