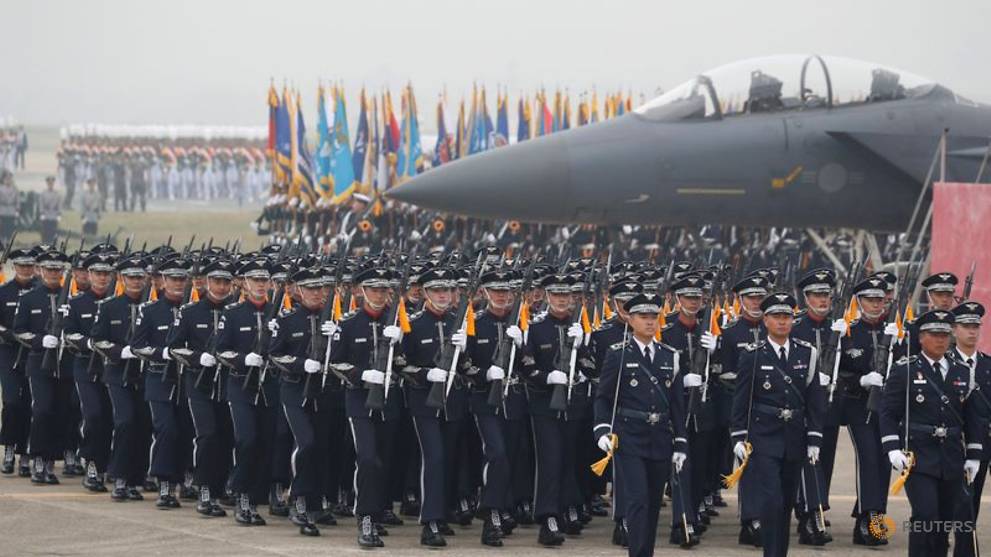 WASHINGTON: When US Defense Secretary Mark Esper rang his South Korean counterpart this week, he pressed for a deal quickly on defence cost-sharing that President Donald Trump expects will translate into much higher contributions from Seoul.

But current and former US officials say privately there appears to be little hope of clinching a new agreement in the coming days, and some wonder about the coming weeks and months.

Trump, they say, already rejected what was probably Seoul’s best offer ahead of its mid-April parliamentary elections – an increase of at least 13 per cent from the previous accord, two of the officials said.

That offer and decision to reject it by the US president, the details of which have not been previously reported, leaves the United States and South Korea at an impasse, even as outbreaks of the coronavirus threaten to undermine US-South Korean military readiness for any potential conflict with North Korea.

But experts on the US-South Korean relationship say the greater risk is damaging the alliance, born out of the Korean War, which still remains popular in South Korea.

Some 28,500 American troops are deployed to South Korea, in what is seen as a deterrent to Pyongyang that also sends a message to China about US influence and capability in Asia.

Trump’s view that wealthy South Korea, which has an economy larger than Australia’s, is taking advantage of the United States is increasingly being met in Seoul by a perception that Washington has become a transactional partner with unreasonable demands.

“The current gridlock is there because they made excessive demands in the first place,” said one South Korean official with knowledge of the talks.

It followed months of intense negotiations that saw South Korea eventually propose to pay more money than ever before as part of a new Special Measures Agreement (SMA).

But Seoul’s proposed increase was far below even the substantially lowered expectations of the Trump administration, who had initially sought an exponential increase to as much US$5 billion from the roughly US$900 million South Korea agreed to in the last one-year, cost-sharing agreement.

“That’s not a small amount of money even if we did offer a 13 per cent hike,” the South Korean official said, adding that while it fell short of the US$5 billion floated by the United States, “to us, that was a non-starter in the first place.”

Esper and Pompeo argued that South Korea was paying for no more than a third of the costs most directly associated with the stationing of US forces on the Korean Peninsula, not to mention other American military and intelligence assets associated with its defense.

“We were very disappointed that we couldn’t get to something that was mutually acceptable,” one of the US officials said, speaking on condition of anonymity.

In one sign of just how fraught the negotiations had been at their start, Reuters has learned that South Korea last year actually presented an offer to cut its contribution.

The proposal on Nov 19, which has not been previously reported, offended the US delegation in Seoul, which cut short the talks, according to a source familiar with the discussions. The South Korean official denied a proposed cut but could not recall the exact reason for the abrupt US move.

The standoff raises a long unanswered question about what the United States might do, if anything, should South Korea fail to make an offer acceptable to Trump, who has made no secret of his displeasure at the cost of deploying troops overseas.

“The President has been clear in the expectation that our allies around the world, including South Korea, can and should contribute more,” one of the officials said, also speaking on condition of anonymity.

What was meant to be the final phase of negotiations in mid-March came even as the United States imposed dramatic travel restrictions over the coronavirus that made all but the most essential engagements off-limits.

That raised questions about whether in-person talks between the US and South Korean delegations to be held in Los Angeles would go ahead. But they did.

South Korean negotiators obtained travel waivers and made their way to the city, the first US official said.

When Seoul finally delivered its offer, it was underwhelming, according to multiple accounts of the conversations. Still, there was some hope that – given the urgent US and South Korean focus on COVID-19 – the deal might be good enough.

“The one thing that gave everybody some wiggle room was COVID, right? … So there’s a public opening. And we don’t do the deal,” said a former US official familiar with the discussions.

“This was the time,” the former official said.

South Korea, held up as a model for containing the pandemic, has said it would make available test kits to the United States and help testing of US troops in South Korea.

Democratic Congressman Eliot Engel, who leads the House of Representatives Foreign Affairs Committee, said on Twitter that Trump should be working with allies on COVID-19 and should not “extort friends.”

The first US official said it was highly unlikely an agreement would be reached before South Korea’s Apr 15 parliamentary elections.

The official said there was concern that this could go well into summer and come closer to November’s US presidential election, perhaps making Trump less amenable to lowering his demands.

One of the most tangible results of the breakdown in the talks has been the roughly 4,000 South Korean workers on US bases furloughed as a result of the failure to reach a deal by an Apr 1 deadline.

The United States says it needs the South Korean cost-sharing contributions to help pay their wages.

Abraham Denmark, a former US deputy assistant secretary of defence for East Asia, said this was the first time furloughs had been carried out since the alliance was created in 1953.

But the impact has not been as visible as it might have been in South Korea, in part due to the coronavirus – which has hampered the furloughed workers’ ability to gather in public to protest.

Son Gio, secretary-general of the (US Forces Korea) Korean Employees Union, said his group was staging daily one-person protests near bases and in front of the US embassy “because of a (government) ban on demonstrations.”

The top US commander in South Korea, US Army General Robert Abrams, released a statement, calling the furloughs “an unfortunate day for us.” He added that they were “unthinkable” and “heartbreaking.”

Still, the furloughs have not had as much impact on bases as they might have, in part because Esper authorised Abrams to retain essential South Korean workers tied to life, health, safety, and minimum readiness.

The bases are also less active, given coronavirus-related closures.

That raises questions about whether the United States and South Korea, which are more focused on the coronavirus than cost-sharing talks, will feel pressure to resolve the matter quickly.

“Unfortunately it seems like this just could drag on,” said Bruce Klingner, a South Korea expert at the conservative Heritage Foundation think-tank.