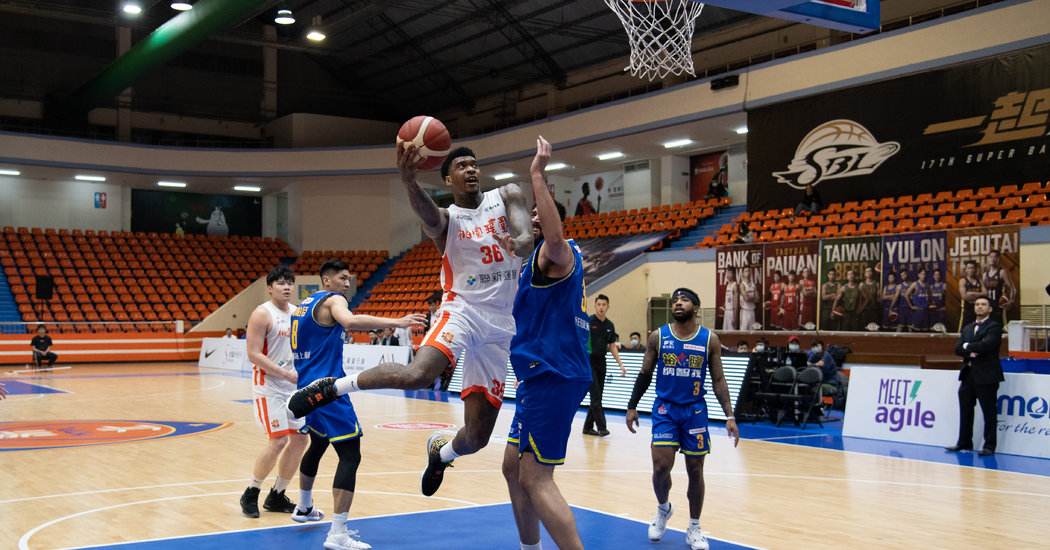 As a student at George Washington University, Ben Metcalf worked as a Washington Wizards ball boy for the same two seasons that the Wizards employed a shooting guard named Michael Jordan. Soon after, Metcalf was an intern in the Orlando Magic video room when they beat the Knicks on opening night — and then lost 19 games in a row.

Metcalf downplayed the novelty of such a distinctive start to his climb in the sport with the claim that “every video guy has the same stories.” Yet it will be harder for him to dispute the idiosyncratic nature of his latest résumé entry: Metcalf, 38, is an American head coach in Taiwan in what is believed to be the only widely recognized professional basketball league in the world currently operational during the coronavirus pandemic.

The global health crisis has shut down nearly every league on the basketball map, but not Taiwan’s Super Basketball League. So on Thursday night, Metcalf coached the team Taoyuan Pauian Archiland in an 85-77 loss to Bank of Taiwan, which was led by the former Duke guard Matt Jones with 29 points. Pauian played Friday and will again Saturday in its final two regular-season games before starting the playoffs — all of which is scheduled to take place in a small gym with no fans in a modest version of the “bubble” environment that the N.B.A. is likely to try to replicate if conditions in the United States allow the resumption of its suspended season.

“You turn on CNN or go on ESPN’s website and you realize: ‘Wow. We’re really the only people fortunate to still be able to do what we love,’” Metcalf said in a telephone interview. “I guess it says a lot about how Taiwan has taken care of the situation as a whole that we’re still able to play basketball.”

The S.B.L. indeed has some significant advantages over the N.B.A., as well as various leagues in the region that have either stalled in their efforts to relaunch (China) or decided to outright cancel the rest of the season after unsuccessful restarts (Japan and South Korea). Taiwan’s league comprises only five teams — in a country that has coped with the coronavirus pandemic as well as any. Despite its proximity and considerable business ties to China, where the coronavirus originally spread, Taiwan’s successful containment — less than 400 reported Covid-19 cases and only six deaths as of April 10, according to the island’s health minister — has been attributed by many experts to lessons learned and measures adopted after the outbreak of severe acute respiratory syndrome (SARS) in 2003.

An order from the Taiwanese government nonetheless shut down all arenas under government control on March 19, suspending indoor events with more than 100 people and all outdoor events with more than 500. The S.B.L. initially planned to shut down for two weeks but managed to relocate days later to the HaoYu Basketball Training Center to stage all games there and ensure gatherings in the building never stray beyond 100 occupants.

The only people allowed inside, beyond the teams playing and the referees, are camera operators for the television broadcasts, officials found at the scorer’s table, and journalists at a press-row table behind one of the baskets. Many working in those capacities, as well as various team staffers and inactive players on the bench, wear masks — with some forced to watch in socks if they forget that only rubber-soled shoes are permitted inside. Grey curtains hang over the windows behind the opposite basket, covering the glass from an adjacent weight room so it stays hidden from TV viewers.

Playing without fans, to Garcia, is a big turnoff. The well-traveled Los Angeles native, who played professionally in 11 countries before leading the Taipei Fubon Braves to the Taiwanese title last season as finals M.V.P., strongly backed the recent assertion by the Lakers superstar LeBron James that playing in an empty arena would be unacceptable for the N.B.A.

“No way, no way, no way,” Garcia said. “You need the fans. Where you going to find your energy? I can’t even imagine that in the N.B.A. That would be really tough.”

Of course, as Metcalf noted, while “it may be tough to imagine” James and the Lakers performing without an audience, such is the spread of the coronavirus on N.B.A. soil that “at this point there really doesn’t seem to be any other way.”

So perhaps there is something for the N.B.A. to glean from the S.B.L.’s experience, even with the Taiwanese league’s much smaller scale.

When they arrive at the HaoYu door, S.B.L. players are greeted by league officials who check their temperature with a forehead thermometer and record the information next to each player’s name. It is assumed that a confirmed coronavirus case in the league would lead to an immediate suspension of S.B.L. play, but no Covid-19 testing is done on site. Any player with a temperature above 99.5 degrees Fahrenheit is refused entry to the facility.

Metcalf said high-fives among Pauian players have been “outlawed.” They have rubbing alcohol sprayed on their hands as soon as they exit layup lines and during timeouts by Penny Peng, the team’s athletic trainer. Peng also makes the players wash their hands thoroughly at halftime and after the game, but such mandates may not be universal. In Pauian’s recent loss to first-place Taiwan Beer, opposing players could be seen on a Twitch broadcast exchanging high-fives during pregame introductions.

Another big change: Pauian’s official Facebook page has seen an uptick in messages from presumed bettors from countries like India and Russia, seeking information on lineups and injuries amid a scarcity of live sports available to gamblers.

The Chinese Basketball Association, with 20 teams in a huge country, is understandably seen as a more representative study guide for the N.B.A. It continues to inch closer to a return after a stoppage that has lasted more than three months. The former N.B.A. guard Pooh Jeter said in a Twitter post on Thursday that “it’s starting to be normal over here in China” and that his Fujian Sturgeons team have begun practicing five on five.

It is reasonable to expect the N.B.A. to mimic some of Pauian’s game-night protocols if it can ultimately secure the needed backing of government officials and public health experts to reopen. One proposed plan to potentially resurrect the season calls for convening teams at a centralized site, like Las Vegas, where the N.B.A. already stages the G League Showcase every December without fans.

Garcia, 31, is a former G League All-Star who also won a championship in the N.B.A.’s developmental league in 2011 with the Iowa Energy. Having played in the G League Showcase, Garcia doubled down on his assertion that the setup is an unfit stage for the N.B.A.

“The only noise is from your teammates,” Garcia said. “I don’t even drink Red Bull, but I’m drinking Red Bull now before a game to find energy. When I get a dunk, you want to scream, but you can’t. It’s pointless. So I just run back on defense.”

After stops in far-flung leagues as disparate as Bahrain, Iceland and the Philippines, Garcia appeared to have found a home in Taiwan. He began this season with the Fubon Braves alongside the N.B.A. veteran O.J. Mayo in the ASEAN League, which culled its 10 teams from eight countries. Garcia, a 6-foot-10, 240-pound forward, then joined Pauian within a week of the ASEAN League’s shutdown in March and quickly helped Metcalf’s team assemble a five-game winning streak.

Garcia’s season, though, turned tragic on Wednesday when his father, Charles Sr., died of kidney failure at 59. The news reached Garcia in the midst of a two-game suspension for a recent scuffle with the 7-foot-5 Sim Bhullar, who briefly played in the N.B.A. with the Sacramento Kings and began the season alongside Garcia and Mayo with the Braves. Rather than make his expected return to the lineup on Friday against JeouTai and the league’s No. 2 scorer Franklin Session of Cal State Los Angeles, Garcia flew back home to California.

Pauian has also lost its best outside shooter and sixth man — Lee Chi-Wei from the Taiwanese national team — to a broken hand. Since it is too late, according to league rules, to replace Garcia on the roster with another import, Metcalf experimented with some new rotations during the Bank of Taiwan loss, searching for combinations to compensate for all the offense he has lost.

Born in Japan when his father was stationed there in the Navy, Metcalf has also lived in England and Turkey and moved to Taiwan in 2007 after working under five coaches in four N.B.A. seasons with the Magic in hopes of learning Mandarin. He initially planned to stay for “a couple years” but never left, marrying a Taiwan native and landing the Pauian job at age 33.

“This game takes us some strange places,” Metcalf said.

With his 5-month-old son asleep, Metcalf then excused himself to take advantage of the quiet in the house to resume watching game film. One of coaching’s least glamorous pastimes, in these coronavirus times, is suddenly a privilege.

“Always a video guy at heart,” he said.