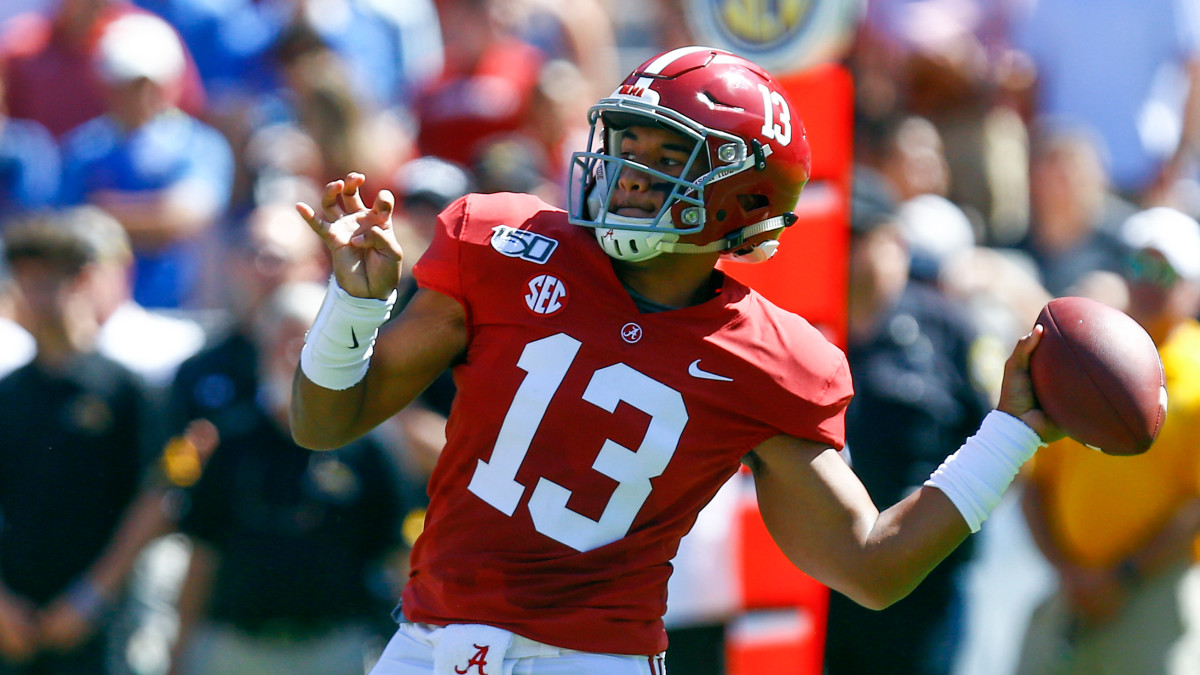 I have included trades that I project will happen here in my mock. Let’s get into it.

Look for Burrow to start from day one and have an outside chance for 4,000 passing yards and 20-22 TDs. He could be a decent QB2 in deeper fantasy leagues.

Young is a difference-maker in the mold of J.J. Watt and would be one of my top selections in IDP leagues.

(Trade with DET. Detroit #3 to Miami for #5 and #26) The Dolphins have 14 picks in this draft, which gives them enough draft capital to make a move for the QB who can lead them for the next decade. Ryan Fitzpatrick will likely be the starter to begin the season, but Tua could play sometime around Week 5 or 6. In a recent MMQB mock, their proposed trade collected a much bigger haul for Detroit.

Many Giants fans will want them to take Isaiah Simmons here, but GM Dave Gettleman knows that he has a huge investment in Daniel Jones and Saquon Barkley and Wirfs is the right choice to protect them.

Tyrod Taylor might start the season as the Chargers QB, but the team will gladly take Herbert here to be their QB of the future.

I can easily see the Panthers trading down here to get more draft picks, but if the Panthers know they will have to figure out how to replace LB Luke Kuechly and Simmons could be that player.

Kyler Murray saw way too much defensive pressure last season, and Wills will be expected to come in and start right away.

Calais Campbell is gone, and Yannick Ngakoue wants out of town desperately. Drafting Brown will help solidify the line until they can add more pieces.

This is a toss-up between him and Becton. Regardless, the Browns need a left tackle to help protect Mayfield.

Most Jets fans will be screaming for the team to draft either Jerry Jeudy or CeeDee Lamb, but the Jets have been working on improving their offensive line all off-season, and picking Becton would be the icing on the cake.

This pick will either be Lamb or Jerry Jeudy from Alabama. The Raiders are desperate for a game-changing wide receiver. Jeudy is a bit faster than Lamb, but Lamb runs better routes. Either player is a solid WR3 for fantasy purposes next season.

Jeudy can stretch the field and allow more room for the 49ers running game to thrive.

Suh is not going to play much longer, and Kinlaw would be a great replacement for him.

The Broncos need a three-down linebacker, and Queen might be the best in the draft. Sneaky play in IDP leagues as a rookie.

Dallas has a gaping hole in its secondary where Byron Jones used to play. Johnson should be a starter from Week 1.

Brian Flores needs to give his rookie QB as many weapons as possible, and Ruggs is the fastest one in the draft. There will be comparisons to John Ross here (mainly due to Ruggs’ speed), but Ruggs is a complete receiver who could spark the Dolphins like Deebo Samuel sparked the 49ers.

He’s got elite height, weight, and length, plus he’s the brother of Stefon Diggs.

(Trade with JAX) Worried that Philadelphia will select him, Minnesota trades first-round picks as well as a pick in 2021 to move up to take Jefferson. Jefferson immediately starts Week 1 across from Adam Thielen and puts up WR4 fantasy stats.

Mims has shot up everyone’s radar with his impressive run blocking ability. His ability to run various routes will endear him to Carson Wentz.

Jacksonville needs to replace both Jalen Ramsey and A.J. Bouye.

Many pundits are expecting Jordan Love to go here, but I think that Belichick likes what he has with Jarrett Stidham. With Collins and Van Noy gone, the Patriots need a guy like Chiasson who can get to the QB.

New Orleans lost A.J. Klein in free agency, and Murray will be able to slide right in and become a three-down starter.

There’s a gaping hole at secondary now that Trae Waynes and Xavier Rhodes have left town.

Love will go to the Lions, or they will trade out of this slot to some other team who will take him. Matthew Stafford’s contract is way too expensive, and they can groom Love for a season before they give him the job.

With Clowney’s status still up in the air, Seattle prepares for life without him.

Baltimore brought Matt Judon back in 2020 on the franchise tag. By drafting Gross-Matos, they might be inclined to let Judon sign elsewhere next off-season.

A replacement for the departed Jack Conklin, Jackson can start Week 1.

He has all the potential in the world and gets to play in his home state.

Richard Sherman will be an excellent mentor to this young, athletic CB.

Kansas City’s OL is getting a bit old, and Jones has the upside to protect Mahomes nicely for the next decade.

Can the Miami Dolphins Make the Playoffs in 2020?