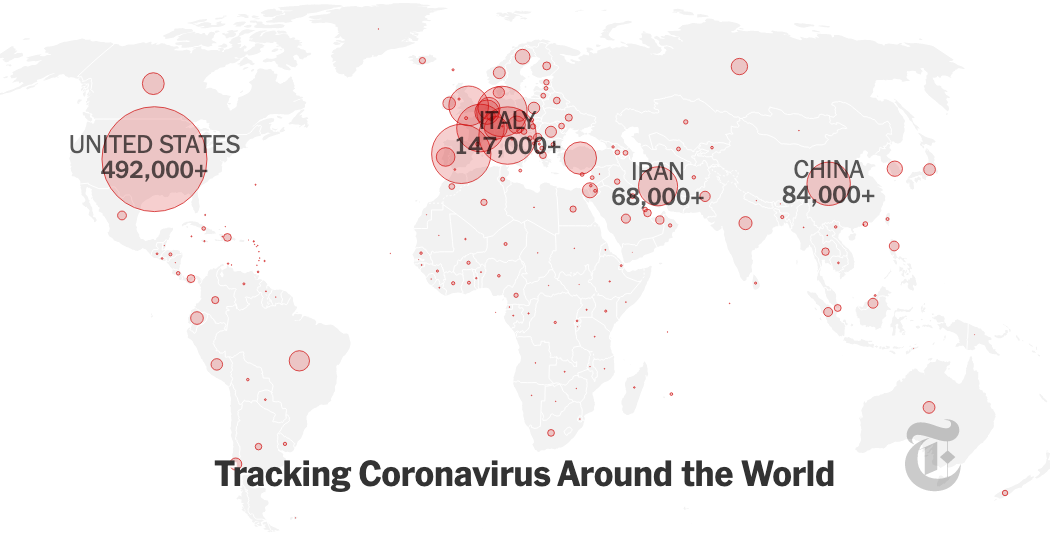 Restrictions may be around for a while

New federal projections show that stay-at-home orders, school closures and social distancing greatly reduce infections of the coronavirus. But if the restrictions are lifted after 30 days, experts say, it would lead to a drastic spike in cases.

For states like New York, Massachusetts and Illinois, which ordered restrictions in late March, that spike would come in mid- to late summer, according to the projections.

“It’s important to remember this is not the time to feel that, since we have made such important advance in the success of the mitigation, that we need to be pulling back at all,” Dr. Anthony Fauci, an infectious disease expert and member of the White House’s coronavirus task force, said on Friday.

The projections, which were prepared by the Departments of Homeland Security and Health and Human Services, offer a sobering argument for continued restrictions:

The restrictions must be lifted eventually, of course, and Dr. Fauci noted that an increase in cases would undoubtedly follow. But the new projections show how crucial the timing will be.

“The facts are going to determine what we do,” President Trump, who has been eager to restart the economy, said on Friday. “We hope we’re going to be able to fulfill a certain date. But we’re not doing anything until we know that this country is going to be healthy. We don’t want to go back and start doing it over again.”

If not now, when? The Times Magazine asked five experts — including a bioethicist, an economist and a civil rights leader — about the moral and ethical considerations that will go into deciding to resume the usual rhythms of American life.

Some normalcy, without lockdowns

While much of the world has put draconian measures in place to fight outbreaks, South Korea and Iceland have avoided doing so — and found a degree of normalcy that remains a distant dream for most countries.

South Korea’s success managing the epidemic is well-known: After an initial explosion of cases, it employed swift, widespread testing and contact tracing. There are now fewer than 50 new confirmed cases a day.

The country has made so much progress that on Friday, it proceeded with a nationwide election. Unlike in this week’s Wisconsin primary, polling stations in South Korea all followed extensive precautions: After voters waited at three-foot intervals, and they were required to have their temperatures taken, use hand sanitizer and don disposable gloves to cast a ballot.

Iceland, whose outbreak started much later than South Korea’s, is trying to follow a similar path — with the goal of testing every single person in the country.

Primary schools, day care centers and some restaurants remain open, and tourists are still allowed to enter. About a tenth of the Nordic island’s 360,000 residents had been tested as of Wednesday morning.

Critics say there are not enough resources to test the whole country expediently, and many have warned that a false sense of optimism could bring disastrous consequences.

But the assistant to Iceland’s director of health has said officials believe that the case count — 1,675 — has already peaked and that more people are now recovering than getting infected.

Determining when Americans will be able to go back to school or work could depend on something called an antibody test. Here’s what we know — and what we don’t — about these tests.

What is an antibody test?

When your body encounters a virus, it triggers an immune response and produces antibodies. The test looks for signs of that response — in this case, the antibodies that appear to fight the coronavirus.

I’m pretty sure I had the coronavirus already. Can I take a test and go back to work?

Not yet. Most of these tests offer a simple yes-no answer to the question of who has antibodies. But simply having antibodies does not guarantee immunity — if you had mild or no symptoms, for example, you might not have developed antibodies strong enough to prevent reinfection.

When will these tests be widely available?

Dr. Fauci said on CNN this morning that more would be available in the U.S. within a week or so, and the World Health Organization is planning to test large numbers of people in multiple countries. Some tests are already available, particularly in research projects and hospitals, but it’s unclear how reliable they are.

How long would immunity last?

We don’t know. But if the coronavirus is like other viruses, it could be anywhere from one to eight years.

Entertain yourself: Our culture writers offer suggestions on music, theater and more to experience at home this weekend.

Don’t fall for these myths: Gloves won’t protect you as well as you might think, and there’s no need to stock up on vitamin C.

Wear a face mask while you run: Even though outdoor exercise is probably safe with or without a mask, most of us probably should cover our faces. Our Ask Well column answered more questions about working out and face masks.

The Times is collecting the stories of people who have died in the pandemic. Here are a few from this week.

John Prine, 73: The raspy-voiced country-folk singer was a favorite of Bob Dylan.

Sandra Santos-Vizcaino, 54: She was one of the most beloved instructors at Public School 9 in Brooklyn.

While walking my dog in the evenings after work, I’ve begun to greet everyone I see, whether I know them or not. I shout a loud “good evening” to passers-by and those out in their yards or simply sitting on their porches. Every car that goes by gets a smile and a wave. We all now have one stitch of commonality, and these simple actions are my way of putting aside all of our other petty differences and saying that together, we will get through this.