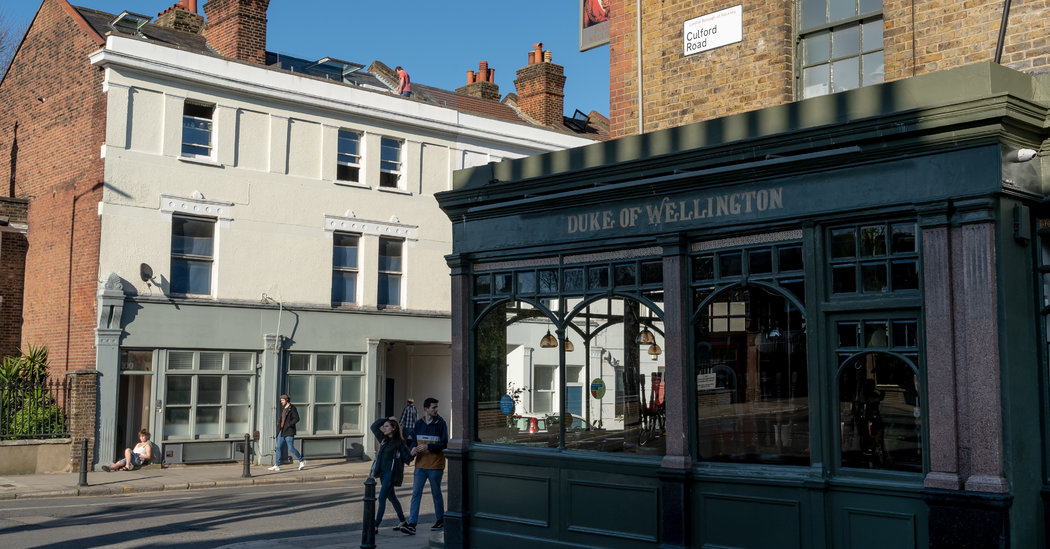 LONDON — After a long day of working from home, all four of them in one cramped terraced house in East London, the roommates wait for salvation via text message.

Today, it comes from Lucie Audibert, a trainee lawyer. “I’m going for a pint at the Ufton Arms if you want to join.” She passes Victor Tricaud, an analyst, as she heads downstairs — he hasn’t seen the text yet — but it won’t be long before he joins her.

Eventually, all four roommates will make their way from their shared apartment to the garden out back: The Ufton Arms, named for the road out front.

They spent the better part of 10 hours on a recent weekend assembling a pub bench in their garden. Naturally, the holes in the wooden slats weren’t aligned, so they bought a cordless power drill and made new holes, determined to finish.

They already had pint glasses — stolen from their local pub, an honored tradition. Someone found a YouTube video for “Pub Background Noise Sound Effects.”

“We thought about making a sign, but that was getting a little too pathetic,” said Ms. Audibert, sipping a pint of her favorite — Beavertown’s Neck Oil IPA — on a Saturday afternoon so sunny it was cruel. As the four of them live in the same household, they are not violating social distancing rules by sitting together in their backyard.

“It’s not much of a pub,” Mr. Tricaud said laughing. “It’s more of a mental recreation of the pub.”

In the midst of a global pandemic that has sickened over 60,000 people in Britain and killed more than 7,000, the desire to sit inside a musty room and share an uncleaned glass of beer with friends ranks low among national priorities. That doesn’t make it any easier.

It may seem trivial, but the closing of pubs is unprecedented for Britain. Never before in the history of the country have the pubs been closed outright.

“I do accept that what we’re doing is extraordinary. We’re taking away the ancient, inalienable right of freeborn people of the United Kingdom to go to the pub,” Prime Minister Boris Johnson said when he announced the closures of all pubs, restaurants, bars and cafes on March 20. (Three days earlier, when Mr. Johnson had recommended that the public avoid pubs and other social venues, his own father responded, “Of course I’ll go to a pub if I need to go to a pub.”)

Even the 20th century wars could not close down the pubs.

“During the two world wars, sometimes there was a shortage of beer and the pubs had to close for that reason,” said Paul Jennings, a historian and author of several books about pub culture and alcohol consumption in Britain. He added that some pubs, particularly those in London, may have closed during The Great Plague of 1665, but that “there is no real precedent for closing all of them like this.”

Historically, pubs were open 24 hours a day, but that started to change in the early 19th century, when they would briefly close on Sundays for church services. Everything changed during World War I, Mr. Jennings explained, as the government at the time claimed that drunkenness was undermining the war effort. (“It probably wasn’t,” Mr. Jennings said.)

Pubs were then ordered to stay closed until at least late morning, then to briefly close again in the afternoon and to close for the night around 9 p.m. The days of grabbing a 6 a.m. pint on the way to work ended with the war, too.

Those general opening hours largely stayed the same through World War II. “Churchill was keen to make sure they still had a beer supply,” Mr. Jennings said. “It was seen as good for morale.”

During the 1980s, Margaret Thatcher’s free market government gradually removed most restrictions on operating hours, once again allowing pubs to open all day. Today, pubs operate on “agreed hours” when they apply for their license with their local council authority. Most close by midnight.

Pub culture has evolved from its original days of old men drinking a pint or 10 in the afternoon. Women are at the pub, children are at the pub, and many pubs are now as focused on food, if not more, than drink. Many a meat-heavy Sunday meal, the “Sunday roast,” has moved from family dining rooms to the pub.

But as easy as it is to lament the loss of the storied British tradition of drinking, pub closures are being acutely felt by business owners and workers across Britain. By last count, there were about 48,000 pubs employing around 450,000 people, all of whom are without work indefinitely. (The government has said it will revisit the closures next week.)

Pubs have been granted permission to sell food for carryout, but no alcohol.

“This is pretty much the worst time in my life,” said Rosie Wesemann, who has owned The Scolt Head, a pub in East London, with her brother for the past 11 years. Ms. Wesemann has had to furlough all 40 of her employees.

The British chancellor, Rishi Sunak, has announced a billion-dollar rescue package that will cover 80 percent of the wages for the staff, up to about $2,900 a month, provided they are kept on by their employer. But the program’s requirements make it inaccessible for many pub owners like Ms. Wesemann.

“We need 30,000 pounds to pay everyone their salary this month,” she said, or about $37,000, “and we don’t have a month’s worth of wages sitting in our bank account.” Ms. Wesemann said she applied for a bank loan two weeks ago.

Many pubs in Britain are searching for other income streams, whether through virtual quizzes or online home-brew classes or just becoming full-time carryout restaurants. Ms. Wesemann said she felt the safety of her employees was not enough to warrant the limited revenue from food sales.

“It’s just not worth it to make a couple burgers,” she said, adding that food delivery apps take a hefty cut. “You need to be selling a lot.”

Ms. Wesemann worries most about her older customers. For as long as she can remember, The Scolt Head has hosted a weekly “Freedom Club,” inviting residents aged 60 and older to meet at the pub on Tuesdays to see a film or make marmalade. It’s the only time some of them leave their house.

“These are really isolated people. It’s not just those who are desperate for a pint of Guinness,” Ms. Wesemann said. “Now, they’re even more isolated, and that’s heartbreaking.”

Sean White, the owner of the Queen’s Head in Pinner, a northwestern suburb of London, was emotional over having to close his own pub — it’s been open for more than 300 years. But he also worried about how the closures would affect communities across the country.

“Up and down England, there are small towns and villages with one pub,” Mr. White said. “If that one pub closes, you change the whole fabric of society.”