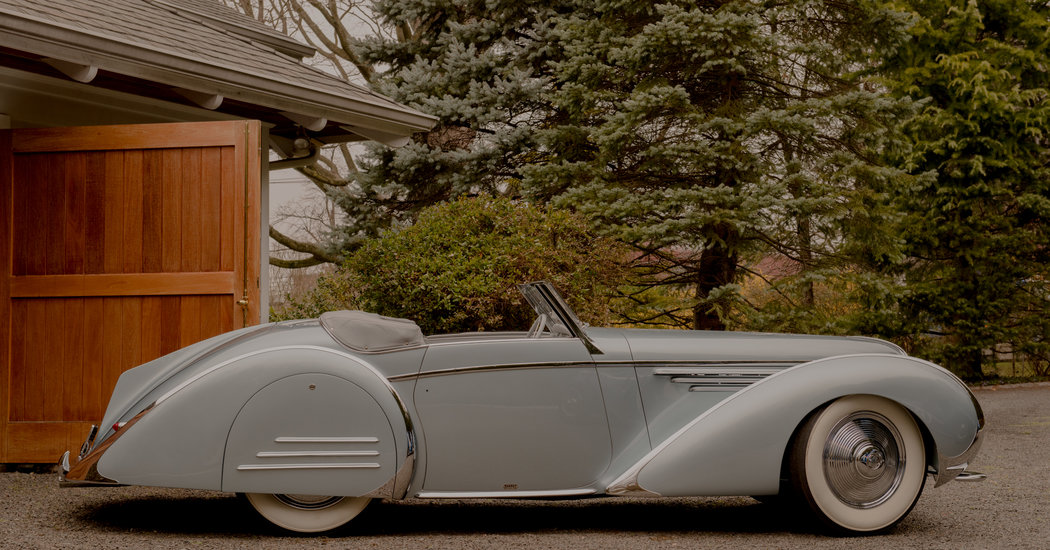 To put it mildly, all three were underdogs.

It was the 1930s, and the French automaker Delahaye was struggling to stay afloat. Compared with the Mercedes-Benz and Auto Union teams generously financed by the Third Reich, Delahaye’s entries into racing competitions were underfunded and underpowered.

Then, as it is now, auto racing was dominated by men, but the American heiress Lucy O’Reilly Schell had a passion for it. And a bank account to back it up.

And René Dreyfus, a French racer who had notched key victories, and a Jew, was losing opportunities as Nazi-bred anti-Semitism spread across Europe.

But together, these unlikely elements — financed by a highly determined Ms. Schell — formed a team that not only won a million-franc race for French automakers in 1937 but beat Hitler’s much more powerful cars in a celebrated Grand Prix event the next year, at least temporarily restoring French pride.

Their story is told in “Faster,” a new book by Neal Bascomb that also delves into an enduring mystery — which of two American collectors owns the winning car today.

“Lucy Schell was an absolute force of nature,” Mr. Bascomb said in an interview. “She and her husband were top-ranked Monte Carlo rally drivers. She was the first woman to fund the development of her own Grand Prix racing team, in the 1930s. Imagine what that took.”

Their racing team, Écurie Bleue, fielded just four Delahaye 145 Grand Prix racers. The cars were powered by a new 4.5-liter, 245-horsepower V-12 engine with a functional alloy body that Dreyfus said in his autobiography was the “most awful-looking automobile I ever saw.” They weren’t expected to win, but did, taking that so-called Prix du Million in 1937. Only French automakers were eligible, and Delahaye won the timed trial, in a lightened 145, by defeating Bugatti (which suffered mechanical problems) at the Autodrome de Linas-Montlhéry outside Paris.

The next year, the same team and quite likely the same car won the Pau Grand Prix on the Pyrenees’ northern edge, beating the hard-charging Germans Rudolf Caracciola and Hermann Lang in a Silver Arrow Mercedes-Benz W154 with more than 400 horsepower.

The French course was twisty, which cut into the Germans’ power advantage. Also, the two Mercedes-Benz cars were less fuel-efficient than the Delahaye, which meant more frequent pit stops. When Caracciola pitted on Lap 52, Dreyfus took the lead, and won the race with a lead of almost two minutes over Mercedes. There was pandemonium in France, Mr. Bascomb wrote, though it didn’t last: “Throughout the rest of the 1938 season, Mercedes dominated.”

But Dreyfus was named the Racing Champion of France. Hitler was furious, and was rumored to have sent a team to France to find and destroy the winning Delahaye.

The book has been optioned to be made into a movie, and it is certainly a cinematic read, made more so by a contemporary addendum. The four Delahaye 145s are all in the United States, three in California owned by Peter Mullin, a premier collector of French cars. But the fourth, and possibly the Pau and Million Franc winner, is in Englewood, N.J., and owned by a similarly respected collector and frequent Pebble Beach and Amelia Island Concours d’Elegance winner, Sam Mann.

The history of racecars, with their frequent swapping of parts and even bodies, can be confusing. Mr. Mullin is convinced he owns the star car, and has amassed considerable documentation. And Mr. Mann has not one but two relevant cars — the chassis he believes belongs to the French race winner, but with an elegant art-deco cabriolet body by the French coachbuilder Franay, and a Delahaye 135M chassis with a timeworn but relatively recent racing body that once graced the other car. One looks the part, but it’s the other that is the actual competition contender.

The New Jersey cars occupy pride of place in a second-floor display area that includes many other French marques, including Voisin, Bugatti and Delage. The cabriolet looks like a Champs-Élysées cruiser, and was displayed at Pebble Beach in 2015 — where it won its class and was chosen “most elegant convertible.” It also won prizes at the Amelia Island concours in 2017, where its history plaque identified it as the former V-12 Grand Prix winner, adding that it was sold to a private client in 1945, rebodied by Franay, then seized by the French government when the client was charged with wartime collaboration. Bought back by Franay, it was then sold to its first owner, “rumored to be Prince Rainier of Monaco,” but quite possibly someone less famous.

This is not in dispute: In 1987, Dreyfus drove this car onto the Montlhéry track to commemorate the famous race’s 50th anniversary. The sports car body then on it, put there by a previous owner, was transferred to the 135 chassis after Mr. Mann’s purchase circa 1997. To complete the swap, Mr. Mann restored the Franay cabriolet coachwork to the 145.

In New Jersey, Mr. Mann lifted the hood and showed the triple-carbureted V-12 that, he believes, carried Dreyfus to victory. Started up and driven out of its resting place, the car sounds nothing like a boulevardier, with the popping and spitting and pouring out smoke and brimstone.

Mr. Mullin talked about the provenance of his car, with chassis number 48711, in an interview. There’s more in the Mullin Automotive Museum’s book, “French Curves,” written by the board member Richard Adatto.

It is, understandably, a convoluted tale, but Mr. Mullin said: “The car was buried in France during the war, then it was on the grounds of the Montlhéry racetrack, then at the owner’s chateau. That this was the Million Franc car was unambiguously confirmed by the Department of Mines in France after I bought it in 1987.” A handwritten document from that agency, after a test at Montlhéry, says, “The vehicle tested (the Millionth vehicle) is chassis and engine number 48.711.”

Mr. Mullin paid $150,000 for a car in pieces, with the front part of the bodywork missing, and had it restored in England over four years. “It’s very well balanced and a dream to drive,” he said.

The Delahaye, with what Mr. Mullin said turned out to be a later Type 155 engine, is now one of many prizes permanently housed at the Mullin museum in Oxnard, Calif. That collection includes two other ex-Lucy Schell 145s that were later bodied for road use by the well-known coachbuilder Henri Chapron.

Mr. Mullin said that Dreyfus, who settled in New York and became the celebrity owner of Le Chanteclair French restaurant in Manhattan, was “an extraordinarily talented driver” and a gentleman who “was not aggressive, except on the track. I was lucky to know him.” Dreyfus’s New York Times obituary in 1993 noted that he placed 10th at the Indianapolis 500 in 1940, and added that his restaurant “for 25 years was one of the more popular stops for international auto racers.”

Despite their competing claims to the star car, the two collectors are longtime friends. “I know Peter thinks he has the correct car, and he cares more about it than I do, but we’re relying on documentation from the Delahaye club,” Mr. Mann said. “It’s a lifelong exploration, and at the end of the day it’s almost impossible to tell which car is the real one.”

André Vaucourt, who has served as historian/archivist for Club Delahaye, established a timeline that traces the car through the Million Franc win, the victory at Pau, another win (without any German entries) in the Cork Grand Prix, an appearance at the Paris Auto Salon in 1946 and eventually through several owners to Mr. Mann.

“It’s a war fought to a stalemate,” Mr. Bascomb said. “Both sides have advanced their experts. Both sides have produced reams of material — photographs, archival documents, supporting testimonies. Neither side has given an inch.”

He added that it was common practice, especially in small operations such as Écurie Bleue, for parts to be swapped between cars — engines, brakes, even steering wheels. “If I was to bet,” Mr. Bascomb said, “I’d say they both own a piece of the car that beat Hitler.”