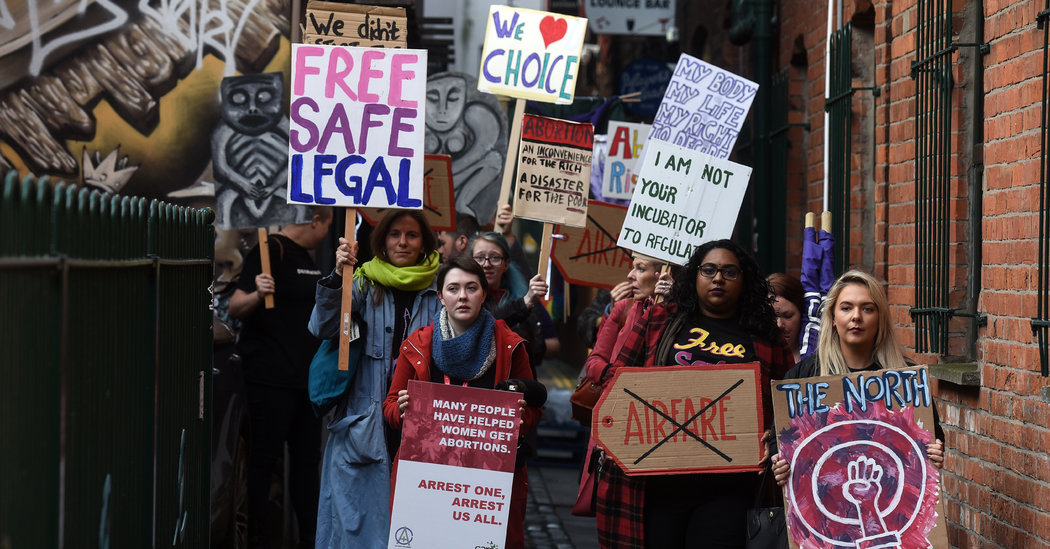 LONDON — A week after abortion was supposed to become freely available in Northern Ireland, women continue to be denied access to services and are instead enduring an eight-hour ferry ride to Liverpool, England, despite the coronavirus lockdown.

The collapse of Northern Ireland’s devolved government in 2017 allowed the British Parliament to step in last year and overturn the region’s highly restrictive, 158-year-old abortion laws, ruling that they were incompatible with the United Kingdom’s human rights commitments.

But even though the new laws went into effect on March 31, the regional power-sharing government, restored in January, is locked in a debate about how to roll out the new services. Many people suspect that the health minister is slow-walking the process, hoping to stymie it altogether.

Northern Ireland’s regional government is led by Sinn Fein, which supports the new abortion legislation, and the Democratic Unionist Party, which ardently opposes abortion in all cases.

The rollout is being delayed by a divisive clash among party leaders regarding telemedicine abortions, recently introduced in the rest of Britain to allow a woman in the early stages of pregnancy to self-administer medication that induces an abortion after a remote consultation with a doctor.

After a closed government meeting on the issue on Monday, Arlene Foster, the first minister of Northern Ireland and leader of the ultraconservative Democratic Unionist Party, said that a “full discussion” about the services was required.

“The health minister will bring papers forward, and we will have discussions in relation to those papers,” Ms. Foster, who previously blocked legalizing abortion in the region, said Monday at a news conference.

“I don’t think it’s any secret that I don’t believe that abortion on demand should be available in Northern Ireland,” she said. “I think it’s a very retrograde step for our society.”

While the issue is hung up in debate, legal experts question why that should be delaying implementation of surgical or pill-induced abortions at clinics, which were supposed to become available up to 12 weeks of pregnancy after the law went into effect.

Abortion is one of the most contentious political issues in Northern Ireland, and many commentators believe that the Department of Health is stalling the process out of ideological objections. The health minister, Robin Swann, has described himself as “pro-life.”

The previous law permitted abortions only if the woman’s life was in danger. Even in the event of rape, incest or fetal abnormalities, women were required to carry their pregnancies to term, and anyone caught procuring an abortion could face life imprisonment.

“We know that health professionals are ready to offer abortion services and that the Trusts have stated they are awaiting approval from the Department of Health,” said Fiona Bloomer, an abortion policy researcher at Ulster University, speaking of the hospital trusts of the National Health Service.

“There is no other blockage to this apart from a decision by the minister of health,” Dr. Bloomer said. “As the D.O.H. has failed to provide any answers, the only conclusion we can draw is that this is a political decision, to stall implementation of the regulations.”

The Department of Health said that an agreement to begin providing abortions had to be reviewed in light of the coronavirus outbreak.

“The minister is currently considering this urgently,” the department said in a statement. “Given the significance and sensitivity of the issue, it will be a decision for the executive,” the statement said, referring to the devolved government of Northern Ireland.

When asked why the coronavirus should delay the rollout of regular abortion services outside of telemedicine, the department did not respond.

Between the political impasse in Northern Ireland and the coronavirus lockdown, women have been left with only one option to secure free abortion services. That is to travel to England on a ferry that takes eight hours each way. Abortions in the Republic of Ireland cost around $500.

Yet, with hotels closed as a result of the coronavirus lockdown, women who travel to England from Northern Ireland for abortions have little choice but to travel immediately back.

“Women are effectively being asked to make an eight-hour journey on a ferry while in the middle of a miscarriage in the middle of a pandemic, without any support,” Emma Campbell, co-chairwoman of the Northern Irish reproductive rights group Alliance for Choice, said in a telephone interview.

Doctors for Choice, an alliance of independent medical professionals advocating for reproductive health services in Ireland, warned that vulnerable women would be hit hard by the restrictions and called their being forced to travel during the pandemic “cruel” and “inhumane.”

“There is no reason these services cannot be established in Northern Ireland quickly, and refusing to do so risks unnecessary spread of the coronavirus, placing women and health care professionals in greater danger,” the group said in a statement.

Between the coronavirus and the delay in rolling out the new law, women in Northern Ireland are finding it harder to access abortion services than they have been in 50 years, women’s rights activists say.

“This whole experience has been terrifying,” said a single mother of three who has been seeking abortion medication in the city of Derry in Northern Ireland. “How am I expected to travel when my three children are home all day, and we are all supposed to be isolating from our extended families and staying at home to protect ourselves?”

The woman, who did not provide her name to protect her privacy, said a social worker had offered to send her the pills and give her instructions and support over the phone. But she said the idea of administering her own abortion scared her.

“I just want to speak to a doctor and be safe,” she said. “I’m still trying to decide what to do, but I think in the end I will have no choice but to do it by myself.”