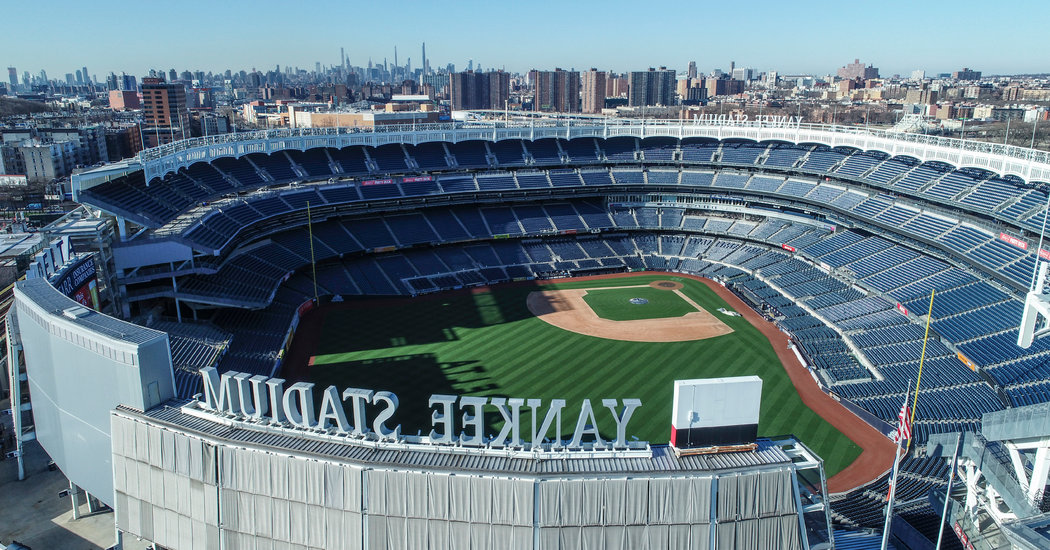 The pigeons are strutting, the leaves in Central Park are budding, and the sun is sticking around longer over Manhattan’s canyons. What’s missing from another spring in New York? Baseball, of course.

So what are the Yankees up to? Starter Gerrit Cole, the big free agent signing of the off-season, filmed himself not pitching, but catching. On the mound was his wife, Amy, who played softball at U.C.L.A., and she showed off some pretty serious fastballs. Cole was in Connecticut, where he planned to live during the season, and Manager Aaron Boone, whose permanent home is there, has also played catch with him recently.

So if a pitcher playing out of position, a runner and a boxer are what the Yankees need, the team should be set. Now if only they were back playing major league baseball.

And Mets fans, we don’t want to leave you out, but perhaps encourage your players to start posting some workout videos across social channels. We’ve got the time to watch.

The Rakuten Monkeys, a Taiwanese major league team, are getting ready to play their first game of the season with a new set of fans in the stands: more than 500 “robot” mannequins.

Opening day was originally scheduled for March 14, but was moved to Saturday because of the coronavirus outbreak. The Chinese Professional Baseball League will be one of the first professional leagues in the world to return.

However, only 200 people will be allowed in each stadium in compliance with government regulations. Since players, coaches, team employees, league officials and news media members make up most of that number, the team came up with an alternative to fill the stadium: robot mannequins dressed in team gear, with many holding up signs.

“Since we are not allowed to have any fans in attendance, we might as well have some fun with it,” Rakuten Monkeys general manager Justin Liu said to the league’s official website.

Starting April 17, fans will also be able to buy custom cardboard cutouts with their pictures on it to appear in the stands. These will cost the equivalent of $200 for a group of four.

The Monkeys have won the last three C.P.B.L. Series, and will start the season against the Chinatrust Brothers, a rematch of last year’s final. DANIELLE ALLENTUCK

The (Possible) Return of English Soccer

If you’re looking for hopeful sports signs, you’ll be glad to know that in a few places, leagues are beginning to actually think about returning to play, and not just Taiwanese baseball.

First, the caveat. No one knows what’s going to happen with the coronavirus, and plans like these could easily go awry. Still, English soccer fans will be heartened to know that the second third and fourth tiers of the game could finish up their seasons this summer.

In a letter, Rick Parry, chairman of the Football League, said training could resume as soon as May 16, games could start in June and the season could finish in August, with little or no break in the season, The Telegraph and other British news organizations reported. The postseason promotion playoffs would also be held under the plan.

The return of soccer would be welcome news to English clubs which have started to feel the financial pinch. The Times of London reported that the Premier League would release some of the 2019-20 season prize money early to help with the strain. Notably, the money would be allocated based on the teams’ league positions at the time the season was stopped; that is perhaps a good omen for Liverpool, which sits comfortably in first place and would like to be declared champions should the season not finish.

A key sign of the financial woes in English soccer came Thursday when Southampton deferred wages, the first Premier League club to do so.