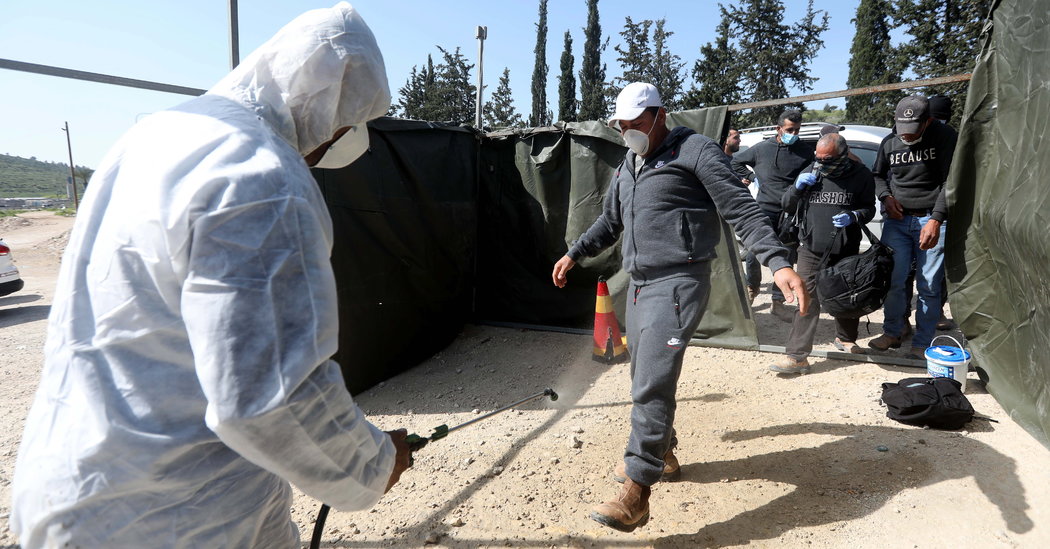 NILIN, West Bank — Jalal Zuhair Mansour supports his wife and four children on the $2,800 a month he is paid as a maintenance man for a Tel Aviv housing complex. But on Tuesday, after a few weeks in an apartment his boss lent him because of an Israeli ban on commuting from the West Bank, he called it quits and journeyed home to Beitunia, on the outskirts of Ramallah.

The coronavirus was simply too widespread where he worked to take any chances, he said, adding: “I am not ready to lose myself and my family.”

Mr. Mansour, and thousands of others like him, have suddenly become the Palestinian Authority’s worst nightmare.

Outbreaks at two kosher chicken slaughterhouses on the Israeli side sickened dozens of Palestinian workers, who brought the virus back to their hometowns. Palestinian officials now say that returning workers are responsible for at least a third of the known cases on the West Bank, including its only death.

As many as 150,000 West Bank residents ordinarily work in Israel or Israeli settlements, earning wages far better than they could command from Palestinian employers. They are vital to the West Bank economy, bringing in an estimated $2.5 billion a year, around 13 percent of total income.

Tens of thousands are still in Israel, but many are slowly making their way home for a variety of reasons: fear, homesickness or lack of a decent place to sleep; because they were laid off; or simply to observe Ramadan, which begins April 23, with their families.

As many as 8,000 workers returned through checkpoints from Sunday through Wednesday, Palestinian officials said, and neither the Israelis nor the Palestinians say they will be able to test them all for Covid-19, the disease produced by the virus. Some workers avoid the checkpoints altogether, slipping easily through gaps in the separation barrier between the West Bank and Israel.

About the best that officials can manage at the checkpoints is what happened when Mr. Mansour, 41, walked through the Nilin crossing on Tuesday. Security officers took his ID and work permit, promising to return them when he finishes his two-week quarantine, then medical workers checked his temperature, sprayed his clothes and cash with alcohol, and sent him on his way.

Officials in Ramallah had initially gone along with Israel’s decision to allow some workers to remain in Israel for a month or two: those under the age of 50 in industries it deemed essential, including agriculture, health and construction.

But Palestinian officials expected Israel to care for any workers who contracted the virus. After an ailing worker was unceremoniously dumped at a checkpoint by the Israeli police (he later tested negative), the prime minister of the Palestinian Authority, Muhammad Shtayyeh, reversed himself and urged workers to return to the West Bank for their own safety.

Now, however, the fear is that many will take his advice — and that large numbers of returning workers could prove unwitting carriers of the virus, an eventuality that would quickly overrun the West Bank’s underequipped hospitals.

The stress on the Palestinian side is showing itself in a ratcheting up of rhetoric that belies the close cooperation between Israeli and West Bank officials behind the scenes — cooperation that the United Nations has publicly praised.

“The economy of Israel is not more precious than the lives of our children,” Mr. Shtayyeh declared at a news conference.

In Gaza, the pandemic prompted Hamas, the militant group that rules the coastal enclave, to float the possibility of a prisoner exchange, which Israel quickly said it would be happy to negotiate. But the Hamas leader, Yahya Sinwar, also blustered that if Gaza didn’t get the medical equipment it needs it would “stop the breathing of six million Israelis.”

While Israel has seen scores die of the virus and more than 9,000 infected, the occupied Palestinian territories have so far actually been relatively unscathed, their isolation ironically offering a measure of protection.

Officials are also deeply worried that the factors that help spread the virus — poverty, poor health, limited access to health care and large families living in tight quarters — are present in abundance in the West Bank and Gaza.

Mr. Shtayyeh’s administration earned broad approval for its aggressive response to an early outbreak involving Greek tourists in Bethlehem: It declared a national emergency on March 5, sealing off the Bethlehem area and abruptly shutting down the entire West Bank tourism industry.

Its security officers imposed a strict ban on travel between cities, and officials at every level have made the crackdown their business: When a Ramallah barber reopened his shop, local leaders threw him in jail.

In Gaza, by contrast, longstanding deprivation has at least softened the blow: Unemployment was already more than 50 percent, and young people already complained that there was nothing to do. “In my opinion, thank you, corona, because corona put the Gaza Strip equal with everyone outside,” joked Rami Aman, an activist with the Gaza Youth Committee, on a Zoom call with other Palestinians and Israelis on Monday night.

All manner of Palestinians are doing their bit: Ramallah disc jockeys are organizing flash mob-style dance parties in which residents take to their rooftops and terraces. The artist Emile Ashrawi, better known as husband of the longtime Palestinian spokeswoman Hanan Ashrawi, reads children’s books on Facebook Live.

The Taybeh brewery is bottling hand sanitizer, a Hebron shoemaker and Gaza apparel factory are making surgical masks and Al-Quds University is racing to turn out ventilators. A Hebron produce merchant let it be known he would give away tomatoes, cucumbers and potatoes to customers who could not afford to pay.

But there is plenty to worry about besides returning workers.

Some 5,500 Palestinians are in Israeli prisons, and they are still being released at the end of their sentences. One was swarmed by a crowd of hundreds when he arrived home in Jenin, a social-distancing disaster. Another tested positive for the virus a few days after his release, raising the grim specter of an outbreak behind bars.

Monitoring groups and security forces say that anti-Palestinian vandalism and violence has surged, as extremist Jewish settlers take advantage of the West Bank emergency by assaulting farmers, damaging property and trespassing or squatting on Palestinian land.

“While Israelis and Palestinians are sheltering in their houses, fanatic settler groups are running wild,” said Firas Alami, director of field research for the rights group Yesh Din.

Fatah, the political faction that already dominates the Palestinian Authority, has set up “emergency committees” of young activists in East Jerusalem and villages across the West Bank in a quasi-official role, spraying disinfectant, distributing food, driving cars with police sirens and generally asserting themselves.

Critics on the West Bank have accused Fatah of exploiting the emergency to expand and consolidate its power, and Israel has arrested a few Palestinian leaders in East Jerusalem, reportedly as a warning against trying to undercut Israel’s authority.

Nothing compares to the fear of an uncontrolled outbreak, however — and nowhere is that fear more acute than in densely packed Gaza, where fewer than 90 ventilators are known to exist in a tiny territory with some 2 million residents. The United Nations is leading an effort to try to obtain 60 more ventilators.

Hamas has quarantined thousands of travelers returning from abroad, but its apparent success at containing the virus so far has given rise to a palpable overconfidence, with growing numbers of people flouting social-distancing rules. On Tuesday, Hamas sent masked security officers out to chase people off the beach.

Matthias Schmale, Gaza director of the U.N. Relief and Works Agency for Palestinian refugees, which has begun home deliveries of food aid to 240,000 families, said people were celebrating too soon.

“This is the wrong time to take the foot off the brakes,” Mr. Schmale said. “It’s an invisible enemy. We don’t know if it is here. And if it breaks out, it will be a disaster.”