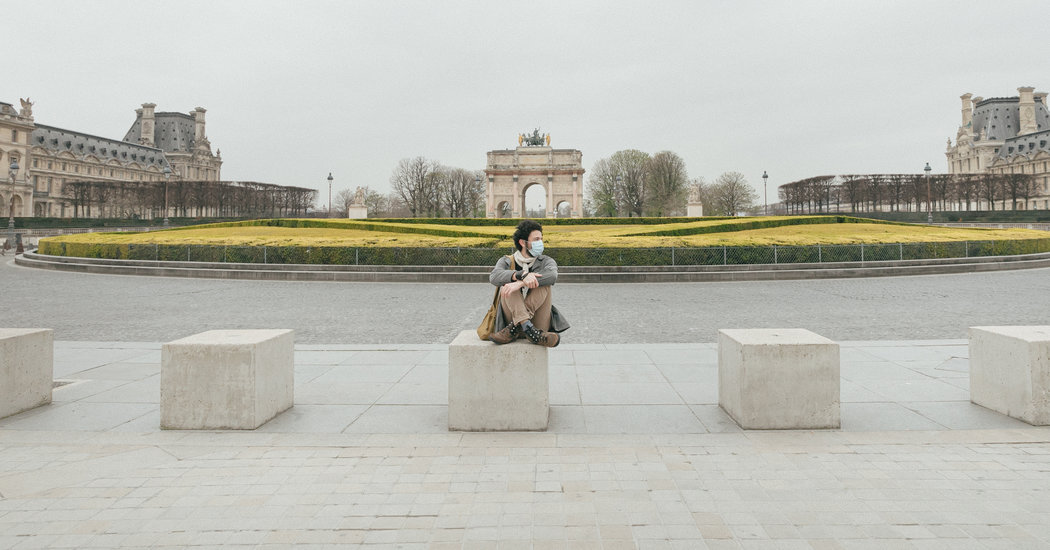 PARIS — Until a few weeks ago, Asian tourists were the only mask-wearers in Paris, eliciting puzzlement or suspicion from French locals, or even hostility as the coronavirus began sweeping across Europe.

Four days into a national lockdown to stem the outbreak, the French government spokeswoman, Sibeth Ndiaye, warned that face masks were so unfamiliar that wearing them was too difficult technically and could even be “counterproductive.” Even on Thursday morning, when asked whether she wore a mask or made her children wear one, she said, “Oh, no, not at all.”

This taboo is falling fast, not only in France but across Western countries, after mounting cries from experts who say the practice is effective in curbing the coronavirus pandemic.

The shift for Western nations is profound and has had to overcome not merely the logistical challenges of securing enough masks, which are significant enough, but also a deep cultural resistance and even stigma associated with mask-wearing, which some Western leaders described flatly as “alien.”

Seemingly, it won’t be for much longer. After discouraging people from wearing face masks, France, like the United States, has begun urging its citizens to wear basic or homemade ones outside. And some parts of Europe are moving faster than the United States by requiring masks instead of simply recommending their use.

This week, Austria moved to become the fourth European nation to require masks in public, after the Czech Republic, Slovakia and Turkey.

On Wednesday, Sceaux, a small city just south of Paris, became the first municipality in France to require masks in public. Violators will face a fine of 38 euros, or $41. The southern city of Nice announced that it would make masks mandatory next week, and the Paris mayor said on Tuesday that two million reusable cloth masks would be distributed there.

Italian officials in Lombardy, the most stricken region in the world’s hardest-hit nation, made mask-wearing outside mandatory on Sunday.

In France, a strong belief that the French would culturally reject the practice — and confidence that masks could be imported quickly if needed — has contributed to a desperate shortage. In the past decade, France’s formidable national stockpile of masks shrank from 1.7 billion to 150 million at the outset of the current pandemic.

The debate over the simple face mask has sometimes evolved into a larger discussion over the role of the individual in society, pitting the West’s individualism against Asia’s collectivism.

President Trump appeared to embody that ambivalence when, even as he announced that the Centers for Disease Control and Prevention now endorsed widespread mask-wearing, he said he would not wear one himself.

Frédéric Keck, a French anthropologist specializing in pandemics, said that, in the West, mask-wearing was seen through an individual’s perspective.

“‘There’s a virus outside, so I wear a mask only to protect myself,’” Mr. Keck said, “whereas collective reasoning, in Asian societies, is to say, ‘I wear a mask to protect others.’”

The difference in mind-set is a crucial one given the nature of all but the highest-grade masks: Masks are believed to have some effectiveness at protecting the wearer, especially in crowded spaces, but are most effective at reducing the risks that the virus will be spread through coughing or talking.

The French government initially said that the vast majority of people need not wear face masks because they didn’t guarantee the wearer protection. In Asia, and in a few European nations, the logic has been fundamentally different: If all individuals wear masks, the society will be protected.

On Monday, Austria made masks mandatory in supermarkets and drugstores, and riders of public transportation will also be required to wear them next week. Chancellor Sebastian Kurz said that the change would require a “big adjustment” because “masks are alien to our culture.”

But masks were also alien to Asia until it was struck by the SARS pandemic in 2003.

In Japan, after people got used to masks, they continued to wear them against seasonal allergies or to protect one another from germs. Unlike in other Asian nations, where many wear masks against air pollution, mask-wearing became widespread despite the absence of immediate threats.

Mask-wearing has become such a part of daily life that it now plays a role in maintaining an overall feeling of being “reassured” in Japanese society, said Yukiko Iida, an expert on masks at the Environmental Control Center, an environmental consulting company based in Tokyo.

“When you put on a mask, you’re not inconveniencing others when you cough,” Ms. Iida said. “You’re showing others that you’re abiding by social etiquette, and so people feel reassured.”

The debate over masks has focused on the divide between the West and Asia. But even inside the West, sharp differences have emerged.

On March 18, the Czech Republic became the first nation in Europe to make mask-wearing mandatory, followed by Slovakia on March 25. Though neither was used to it, people across both countries mobilized by sewing masks at home, often giving them away to doctors, nurses and shop assistants or leaving them on their doors or gates to offer to passers-by.

In Slovakia, television anchors and politicians took the lead, wearing masks in studios and outside. During the swearing-in ceremony of a new government, President Zuzana Caputova wore a red one that matched her dress, helping to remove the stigma.

The mass mobilization in both countries reinforced what experts say is a crucial factor in fighting any epidemic: solidarity.

“When we both have a face mask, I protect you, you protect me,” said a Czech actress in a widely shared video that featured the country’s minister of health and urged other nations to make masks mandatory.

Slovakia and the Czech Republic were quicker to embrace face masks, experts said, in part because of their Communist legacy’s emphasis on collectivism.

“People simply learned to be obedient in critical moments,” said Michal Vasecka, a sociologist at the Bratislava Policy Institute.

By contrast, in France, where a sense of individualism is stronger, even government officials were long pessimistic about the adoption of mask-wearing against potential epidemics. In fact, so ingrained was the cultural resistance to masks that, as a security measure, France became in 2011 the first European nation to ban the public covering of the face, including with the Muslim veil.

A 2010 report by the French Senate, the upper house of Parliament, noted that the practice had been met with “cultural reluctance that has proved insurmountable in the short term.” It added, “More than an act of individual or altruistic protection, wearing a mask is seen as stigmatizing.”

Jean-François Mattéi, a former health minister and the current president of France’s National Academy of Medicine, said that because of the cultural reluctance and budgetary problems, maintaining the national stockpile might have been pushed down the list of government priorities.

In 2009, in face of the H1N1 pandemic, France had amassed 1.7 billion masks, but stocks had fallen to 150 million at the outset of the coronavirus pandemic, according to a recent report by the academy.

“This decision was absurd, and we’re seeing the consequences now,” said Philippe Juvin, the head of the emergency department at the Georges Pompidou European Hospital in Paris.

Faced with shortages, which it first denied, the French government discouraged people from wearing masks, saying only the sick should wear them in public and that they were otherwise not useful.

But the recommendations not only failed to convince French people who thronged pharmacies in search of masks, but they also conflicted with images of President Emmanuel Macron wearing a mask when he visited a military field hospital in eastern France on March 25.

Though the French government has yet to make masks mandatory, powerful groups, like the Academy of Medicine, have recommended that they be.

Mr. Mattéi said that wearing masks during epidemics was likely to “become the norm” in Western countries after the end of the pandemic, adding, “I’m convinced that pretty soon everyone in a family will have their two or three reusable face masks.”

Daniel Illouz, a pharmacist in eastern Paris, said that he had been skeptical of the government’s repeated message that widespread mask-wearing was not helpful in fighting the epidemic.

“I don’t see why in all the Asian countries, where they have masks, it would work, but it wouldn’t work for us,” he said.