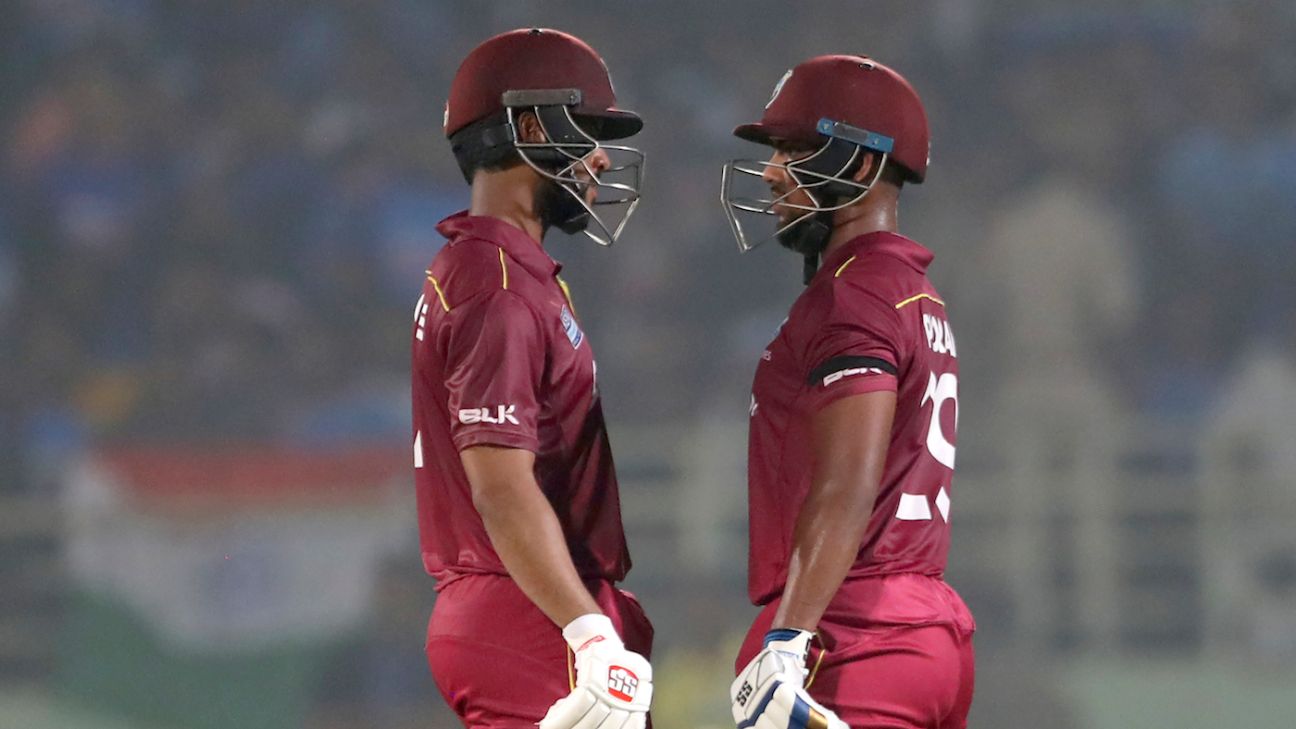 Nicholas Pooran, Shimron Hetmyer and Shai Hope. These three men from three different islands in the Caribbean are the reason Michael Holding can see “light at the end of the tunnel” for West Indies cricket, which he feels can once again become a global force if the young talent is nurtured properly.

“I see light at the end of the tunnel because I see talent,” Holding said on the Mason & Guest podcast, aired on Tuesday. “It is a matter now if we can garner that talent, if we can produce the best of that talent, and then produce, of course, a good team. Because individual talent ain’t gonna go as far as a good team with a good team spirit and a good management structure around that team.”

Holding said the reason he was confident about Pooran, Hetmyer and Hope being the flagbearers of a bright West Indies future was that they could be picked in most teams around the world right now.

“Most people can look at teams and look at people and say, ‘Yeah, that guy looks as if he knows what he is doing.’ And I can call three names immediately that I think have a lot of talent in the batting department. Pooran, Hetmyer, Hope. Anyone going to tell me that three guys cannot bat? And there are others, but I am picking those three because those three I think are the most talented in the last two-three years. It’s now about making sure that these guys exhibit the right discipline to get the best out of themselves. And I’m absolutely sure that there are other youngsters around the Caribbean that can come around that nucleus and give us a good team.

Jason Holder, the Test captain, has been the backbone of West Indies’ gradual rise in the longest format. Along with being the leading Test allrounder in the ICC’s Test rankings, Holder is third on the bowling rankings, where team-mates Kemar Roach, at 11th, and Shannon Gabriel, at 19th, also occupy the top 20.

Among Pooran, Hetmyer and Hope, only Pooran, 24, is yet to play Test cricket but has already shown the potential to be one of the better finishers in limited-overs cricket. Hetmyer, who is the youngest among the three at 23, has featured in 16 Tests. Although he does not have a century in Test cricket, he has also been singled out by Lloyd as one to watch out for.

Hope, who is 26, is the most experienced of the three, having played 31 Tests and scored two centuries, both of which came in West Indies’ historic series-levelling victory at Headingley in 2017. Hope’s twin centuries in that Test made him the youngest West Indies player to achieve the feat, beating Gordon Greenidge’s record.

According to Holding, one big difference between his era and the current one was that modern West Indies teams did not have the burden of carrying the hopes of the Caribbean public, something Lloyd’s team had to carry. Today’s players, Holding said, were vested in self-pride. “The pressure is not there to prove yourself so much now as it was before. It’s now just a matter of each individual, your own pride of performance, which I think creates less of a significance of the player himself.

“But when you know the millions of people are looking at you to give them that extra impetus to get up in the morning to feel that worth and feeling they are a significant part of this entire world that just makes you lift yourself a little bit more. I don’t think these guys are made up any different from us, but they are growing up in a different world.”

Holding emphasised that cricket administrators across the Caribbean islands needed to make sure they were “not just looking to build cricketers, but we must look beyond that”.

Holding gave an example from his playing days when former Barbados prime minister Errol Barrow addressed the West Indies squad at the invitation of Rudi Webster, who was the team manager at the time. Holding recollected that despite being “big men”, each player left “as if they had grasped, as if they learnt something” about wider life.

Holding suggested Cricket West Indies could look at helping the young talent become psychologically adept by inviting former players and mentors from other walks of life. “The focus now is not so much about representing the millions of people; the focus now is more about representing yourself and the immediate people around you. So as I said, it’s up to us, the older folk, whether you are a board member or a respected person around the Caribbean, to help in that regard. That is why I was suggesting the talks by well-respected people around the Caribbean to talk to these kids because that’s a very important part of building the team and team psyche.”

Incidentally, the current CWI administration led by former West Indies team manager Ricky Skerritt (president) and Kishore Shallow (vice-president) has plans to engage the former Caribbean greats to mentor players across the teams. In a review published this month at the completion of one year in office, the Skerritt-Shallow leadership group said it was looking to create a legends-oriented ‘Cricket First’ advisory group subject to the financial resources. “Such a group will make relevant and insightful recommendations on cricket-specific matters, and be engaged for other constructive purposes such as fund-raising, sponsor appearances, and player mentoring,” CWI said in the review.