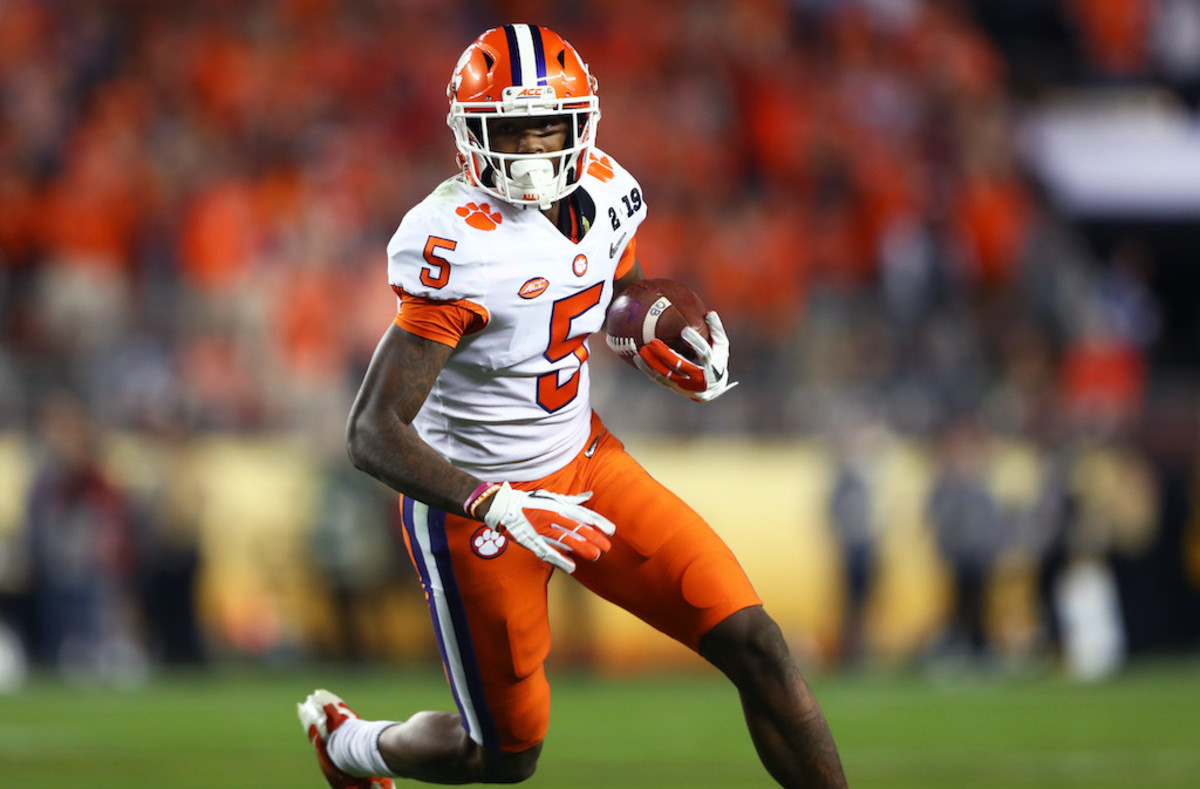 Sports Illustrated‘s Kevin Hanson released his latest mock draft on Thursday, which you can find here. Please check that out before continuing below.

Let’s step into a hypothetical world for a moment and imagine that the actual 2020 NFL Draft plays out precisely like Hanson’s mock. What would that mean for fantasy football managers?

Let’s examine the potential fantasy value of some of the top offensive players off the board in Round 1 of SI’s latest mock.

Jeudy being the first wide receiver off the board isn’t a surprise, but seeing him go to Jacksonville at pick No. 9 was. However, WR is a need for the Jaguars, especially if they bring another young QB in to compete with Gardner Minshew (more on that later). D.J. Chark had an amazing fantasy season out of nowhere in 2019, finishing as the WR16 in overall PPR points and as the WR13 on a points-per-game basis. Jeudy has the skillset to make as quick of an impact as a rookie receiver can make, and there isn’t the same competition for targets in Jacksonville as there is Las Vegas, New York, or Philadelphia. Jeudy is a borderline WR3 in 2020 if he lands here.

The need for a true No. 1 wide receiver for the Raiders has been evident since the whole Antonio Brown blew up before the 2019 season even began. While Las Vegas does have Tyrell Williams, Hunter Renfrow, and Darren Waller, everyone involved would be elevated (from a real-life perspective) by adding Lamb to the mix. It will be interesting to see if the Raiders throw more in 2020 than they did the last two seasons when they were at or below average in pass attempts. Still, the passing offense will be relied on more in Las Vegas than in San Francisco, another popular landing spot for the former Oklahoma Sooner. Lamb is a high-end WR4 if he lands here and could find his way into some flex spots given the right matchups.

The Broncos need to add another weapon for Drew Lock and a complement to Courtland Sutton. Ruggs making it to No. 15 would be a tremendous, but realistic coup. Ruggs is a game-breaker that changes the whole dynamic of Denver’s offense. They’ll be able to run it down your throat with Melvin Gordon and Phillip Lindsay, beat you down with body shots from Sutton, and take the top off with Ruggs. The Broncos are built for a run-the-ball-and-play-defense style, but Ruggs will immediately become the No. 2 option there and will have some huge weeks. I’d draft him as a WR4 to start because there could be consistency issues, especially if the Broncos limit Lock’s throwing output. The earlier the Broncos draft a WR, the better.

Just a quick note here since there’s little fantasy relevance outside for 2QB leagues, where he’d likely be taken as a third QB in hopes he becomes the starter midseason. Jacksonville is a seldom-mocked spot for Love, but it does make some sense, especially if the Jaguars don’t have to move up for him. Jacksonville needs to find a QB of the future eventually, and there’s no guarantee that they’ll be bad enough to earn the No. 1 overall pick next year and take Clemson QB Trevor Lawrence.

Jefferson to Philadelphia is a perfect fit. Here’s what I said about him in my latest mock draft:

Jefferson should step in and immediately take over Nelson Agholor’s slot role, although he could develop into more of an outside WR as needed down the road. Jefferson has great hands, something that couldn’t be said for Agholor, and is a strong route-runner. He’s exactly what Carson Wentz needs to complement Alshon Jeffery, Zach Ertz and Dallas Goedert.

Jefferson should be ranked right around, if not above, Lamb as a high-end WR4 despite going almost 10 picks later. If Philadelphia experiences a high volume of injuries again—or if the Alshon Jeffrey drama reaches a boiling point—he’ll be an every-week starter in 3-WR leagues.

This is another player-to-team fit that I love. Here’s what I said about this landing spot in my mock:

Aside from the back-shoulder options he’ll open up for Kirk Cousins, Mims’ strong blocking skills make him an ideal fit in Minnesota’s run-heavy offense.

The concern from a fantasy perspective is how run-heavy the Vikings are. They’re going to rely on Dalvin Cook and, to a much lesser extent, Alexander Mattison to carry this offense. There is room for a new No. 2 option with Stefon Diggs in Buffalo, but I think Mims is a mid-level WR5 at best in 2020 and no real threat to knock Adam Thielen out of the Top 20 WRs.

Higgins is a borderline real-life first-rounder, but I like the pick here. The Packers desperately need another pass-catching option aside from Davante Adams. Running back Aaron Jones can’t be the No. 2 option for Aaron Rodgers if the Packers fancy themselves a Super Bowl contender. Higgins can catch almost anything and can be a genuine vertical threat for Green Bay. It might take him some time to acclimate to the offense, especially with Devin Funchess in the fold short-term, but he’s worth a late-round flier in fantasy drafts. I’d take him ahead of Mims, but behind the other receivers on this list.

RB D’Andre Swift, Miami Dolphins: Swift can step in and have a significant role immediately alongside Jordan Howard. He may not get much goal-line work, but he’s an underrated pass-catcher that can play on passing downs and be a safety blanket for Ryan Fitzpatrick. He’s worth a speculative add as a potential flex play, but could very well be hyped up draft boards.

WR Laviska Shenault, Houston Texans: Shenault is no DeAndre Hopkins, but it’s a start after they let the Cardinals “steal” him away. He’s dynamic, can lineup all over the field, and has a chance to seize a significant workload with the oft-injured Will Fuller and Kenny Stills as his only competition. He’s a late-round fantasy flier or a guy you put on waiver wire speed dial.

RB Cam Akers, Kansas City Chiefs: The Chiefs taking a RB makes way more sense in Round 2 than Round 1, especially after the signing of DeAndre Washington. There are a lot of backs in KC (Damien Williams, Darrel Williams, Darwin Thompson, Washington, etc.), so I don’t see Akers making a fantasy impact right away.

You can read my thoughts on Jonathan Taylor to the Los Angeles Chargers, J.K. Dobbins to the Tampa Bay Buccaneers and Michael Pittman Jr. to the Baltimore Ravens at the bottom of this article.

Can the Miami Dolphins Make the Playoffs in 2020?