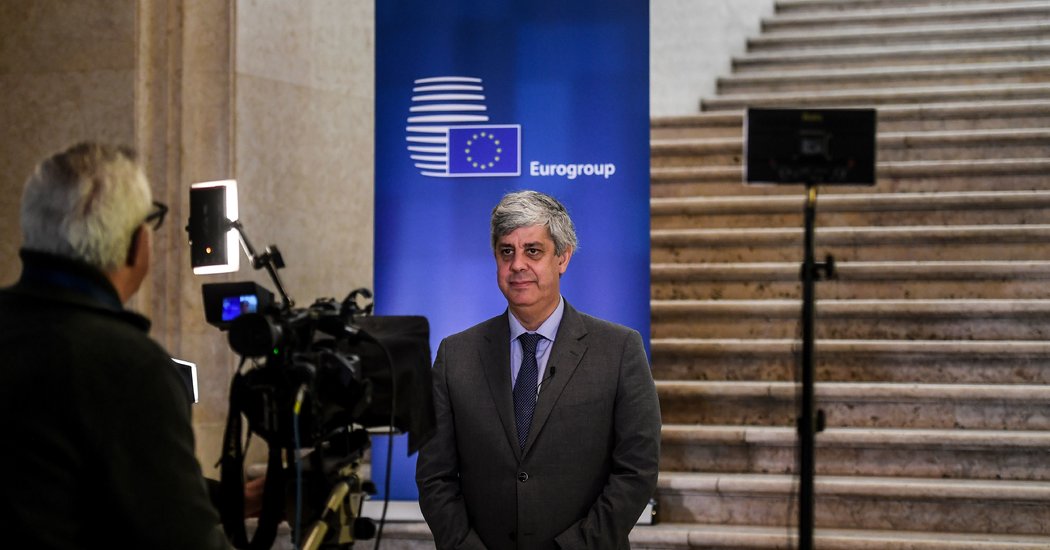 BRUSSELS — European Union finance ministers agreed Thursday night to a plan calling for more than half a trillion euros worth of new measures to buttress their economies against the onslaught of the coronavirus, but dealt a blow to their worst-hit members, Italy and Spain, by sidestepping their pleas for the bloc to issue joint debt.

Even in the face of an unprecedented economic crisis caused by a virus that has killed more than 50,000 bloc citizens and infected over a half million, wealthier northern European countries were reluctant to subsidize cheap debt for the badly hit south.

And while Germany, the Netherlands and others showed greater generosity than they had in previous crises, the details of the measures announced showed they had gone to great lengths to limit and control the way the funding is used.

The programs the finance ministers agreed to recommend to their countries’ leaders for final approval included a €100 billion loan plan for unemployment benefits, €200 billion in loans for smaller businesses, and access to €240 billion in loans for euro-area countries to draw on from the eurozone bailout fund. One euro is equal to about $1.09.

But the ministers were not able to reach an agreement on issuing joint bonds, known as “corona-bonds,” despite pleas from the leaders of Italy and Spain, which are bearing the brunt of the crisis, after staunch resistance from Germany, the Netherlands and others. And, in a victory for the Netherlands which was lobbying to restrict how the bailout funds can be used, the ministers decided they should be limited to health-related programs.

Throughout its history, the European Union has refused to issue joint bonds, but the size and scope of the current crisis had led some analysts to think the bloc might be willing to back the idea this time, which would have represented a major step in bringing it closer to becoming a United States of Europe. Pooling debt was foundational to the creation of the United States, and it would be considered a momentous step in the bloc’s governance structures moving toward federalism.

But the need for unanimous backing of major measures — always a brake on swift and bold decisions by the European Union in times of crisis — derailed the bond idea and meant that negotiations for the shape of the economic package were fraught. It took a second meeting to build consensus, after an attempt on Tuesday ended in acrimony.

The finance ministers were well aware of the dramatic toll the virus was taking on all the bloc’s economies and that a failure to produce an agreement would be disastrous for the confidence of both the bloc’s citizens and for financial markets. As the United States moved to announce stimulus measures, there was a growing sense that Europe was once again doing too little too slowly.

“The most important thing for the finance ministers was to sign off on a deal and a €540 billion tagline,” said Mujtaba Rahman, the head of Europe practice at Eurasia Group, a consultancy. “But despite everyone patting themselves on the back, there are lots of substantive gaps in the deal that will only become apparent later down the line,” he added.

At stake is the recovery of the world’s richest bloc of nations, including the eurozone’s 19 members whose currency is one of the most important globally.

A failure by the European Union to help its most affected members would hurt not just its economies, but also affect regional politics and societal attitudes, and cause the bloc to lose clout on the world stage.

While the half-trillion euro figure, together with each individual country’s national stimulus programs, is a sizable sum, it is still hard to assess whether it will be nearly enough to help European economies withstand the fallout from the health crisis and achieve any sort of growth as economic activity is gradually resuscitated.

The bloc’s wealthier countries may have thwarted the joint bonds, but, inevitably, rescue packages for the worst-hit economies will involve subsidies from the richer north to the poorer south, a recurrent, toxic theme in the bloc’s history.

While all countries agreed on Thursday that there should be “solidarity” with the worst-hit countries, and that the European economies are so deeply integrated that rescue packages are helpful to all, the shape of that solidarity proved deeply contentious.

For Prime Minister Giuseppe Conte of Italy, the deal Thursday will be a tough sell: He has passionately advocated joint debt issuance and demanded easier access to the eurozone bailout fund to support his country’s recovery. He got neither.

Anti-European sentiment is on the rise in Italy and Spain, the bloc’s third- and fourth-largest countries and economies, and the two E.U. nations hit hardest by the virus. Outrage and despair over thousands of deaths have fueled a feeling that Europe is not helping them in their hours of need.

The political infighting among the bloc’s leaders and ministers, roughly tracking the battle lines of previous crises that cast northern members against southern ones, is threatening to spawn another wave of euroskepticism and populism.

The European Union, already battered over the past decade or so by a major financial crisis, the migration crisis and Brexit, can ill afford failing its members and letting questions over its usefulness spread deeper.

The recession that the eurozone will experience because of the coronavirus is set to be brutal: Economists predict the bloc’s output is likely to shrink this year by around 10 percent. By contrast, the recession that followed the last financial crisis was, at its worst year in 2009, 4.5 percent in the eurozone.

This week brought home just how bad things are getting in some of the region’s most important economies. New data released Wednesday showed that the French economy, the region’s second-largest, shrunk by 6 percent between January and April compared with the last quarter of 2019, the worst performance in half a century, and is now formally in a recession.

And in Germany, the Continent’s leading economy, five major institutes predicted the second quarter of this year would bring a 10 percent recession. For Italy and Spain, things could be worse still, with UniCredit predicting a 15 percent recession in each.

Paolo Gentiloni, the European commissioner for the economy and a former Italian prime minister who is an advocate for a special coronavirus fund and joint corona-bonds, said that Thursday’s measures were not the final word in Europe’s collective economic response.

The fund was mentioned vaguely near the bottom of the ministers’ conclusions as a “recovery fund” to be discussed further by European Union leaders next week.

“This is not the end of the road. Thousands of European citizens are still fighting for their lives,” Mr. Gentiloni said.