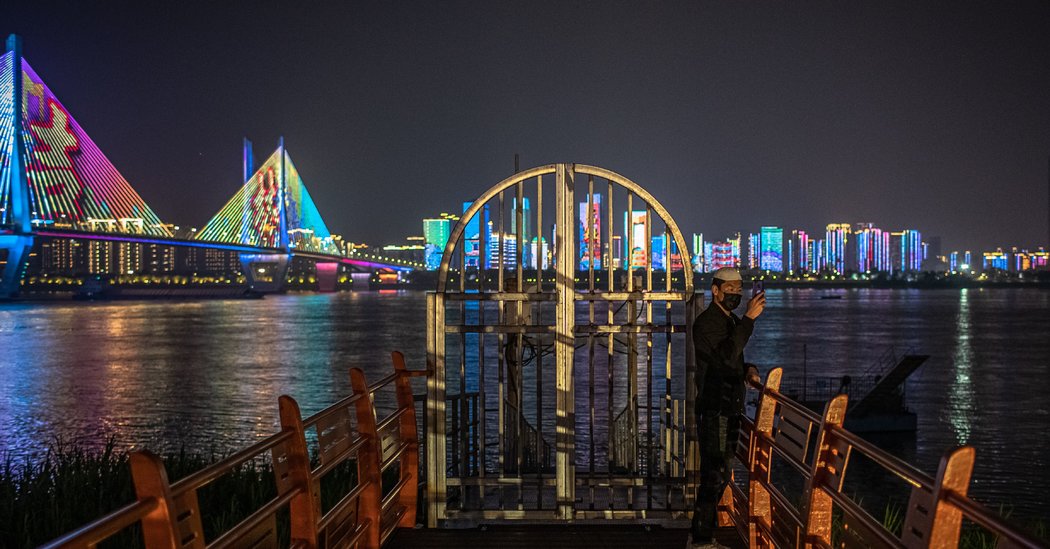 After over 10 weeks of lockdown, residents of Wuhan, China, can now leave that city if they present to the authorities a government-sanctioned phone app that measures their contagion risk. Shops are reopening, parks are filling and life is slowly creeping back.

The reopening on Wednesday came a day after China reported no new deaths for the first time since January, though doubts remained about the country’s statistics.

Within the city of 11 million, tough rules are still in place to prevent the coronavirus from resurging. Officials are telling everyone to stay home as much as possible, and schools remain closed.

The experience has left a “profoundly damaged” city, our correspondents write. “Sickness and death have touched hundreds of thousands of lives, imprinting them with trauma that could linger for decades.”

Prime Minister Boris Johnson of Britain remained in the intensive care unit of a London hospital on Tuesday battling coronavirus symptoms. He is receiving “standard oxygen treatment” but has not been put on a ventilator.

It has thrown Britain, which does not have a codified order of succession, into uncharted territory. The nation’s current stand-in is Dominic Raab, the foreign secretary, who will become the government’s de facto leader if Mr. Johnson is unable to carry out his duties.

Still, there’s good news; more than 750,000 volunteers have signed up to health service and community groups to help take care of Britain’s most vulnerable people during the country’s lockdown.

Read an interview with our London correspondent in our Back Story below.

Spain has the second highest number of cases in the world, with over 14,000 reported deaths.

The epidemic has forced Spaniards to confront the kind of struggle harkening back to the 1930s Spanish Civil War.

Health care unions, with more members infected than anywhere else in the world, are now taking the authorities to court for not protecting them. About 15 percent of Spain’s population is estimated to have been infected. Critics have blamed Prime Minister Pedro Sánchez for not locking down the country earlier, and for not stockpiling medical equipment.

Spain’s crisis is a painful example of one government’s tendency to initially dismiss the virus’s toll on countries struck earlier during the pandemic — though the country is not alone.

Japan: Medical experts are wondering whether Japan’s declaration of a state emergency on Tuesday is too little, too late.

United States: President Trump threatened to cut funding to the World Health Organization on Tuesday, criticizing its handling of the outbreak. He also denied seeing a memo from a top adviser warning in January that the pandemic could kill or sicken millions of Americans.

Opinion: Nearly a month into lockdown, the self-employed and seasonal workers of Italy are having the toughest time as the economy heads for a contraction, write two translators in the country.

If you have 10 minutes, this is worth it

Guyana, once one of South America’s poorest countries, is speeding toward a future as an oil-producing giant.

Many are welcoming that change. Others, though, wonder if the new wealth will change life for a majority or for just a select few. Ethnic tensions are intensifying, and environmentalists worry about the toll of fossil fuel production on a nation where nine out of 10 people live below sea level.

Snapshot: Above, Ying Ying and Le Le, two giant pandas who finally got into the mood after 13 years of living together in a Hong Kong zoo. The two members of the famously low-libido species successfully mated on Monday, a cause for celebration in the animal conservation world.

New Music: How the English pop star Dua Lipa released one of the year’s biggest pop records from her couch.

What we’re reading: This GQ feature that goes inside Eliud Kipchoge’s Kenyan training ground. “Come for the photos of the fastest marathoner in history, wearing couture,” says Talya Minsberg, a Sports editor. “Stay for the words by Knox Robinson and wisdom shared by Kipchoge.”

Walk us through Boris Johnson’s condition and how his case has progressed.

We heard on Tuesday that he was stable overnight and was still in intensive care. Critically, they said he had gotten some oxygen but had not been on a ventilator or required invasive treatment.

His girlfriend, Carrie Symonds, who is pregnant, tweeted about feeling symptoms, but we have no suggestion that she has suffered anything as serious as Boris Johnson.

There was quite a lot of surprise and a certain amount of shock in the announcement this week.

Really until Thursday, and even into Friday, the plan was for him to come out of self-isolation on Friday, which would have been seven days from when he was diagnosed. Then he himself did a sort of rather shaky at-home video explaining his situation, in which he didn’t look terrible, but he didn’t look great either. That was as far as we knew.

What are the big questions about leadership in this time of crisis?

It has caused something of a power vacuum. We’re in a rather unpredictable position where we’re slightly unclear how the government is being run. As you know, there is no written constitution.

The foreign secretary, Dominic Raab, is deputizing for the prime minister, but there does seem to be this feeling at the moment that everything is kind of going wrong for the government at an incredibly critical time for the country.

A correction: Tuesday’s briefing misstated the name of the British agency whose staff members worked with the code-breaking facility Bletchley Park during World War II. It was MI6, not M16.

Thank you
To Melissa Clark for the recipe, and to Theodore Kim and Jahaan Singh for the break from the news. You can reach the team at briefing@nytimes.com.

P.S.
• We’re listening to “The Daily.” Our latest episode is about the presidential primary election in Wisconsin.
• Here’s today’s Mini Crossword puzzle, and a clue: party souvenir (five letters). You can find all our puzzles here.
• Join The Times’s science team for a live discussion of the latest findings on the coronavirus. R.S.V.P. here for the call, at 9 p.m. today in London.