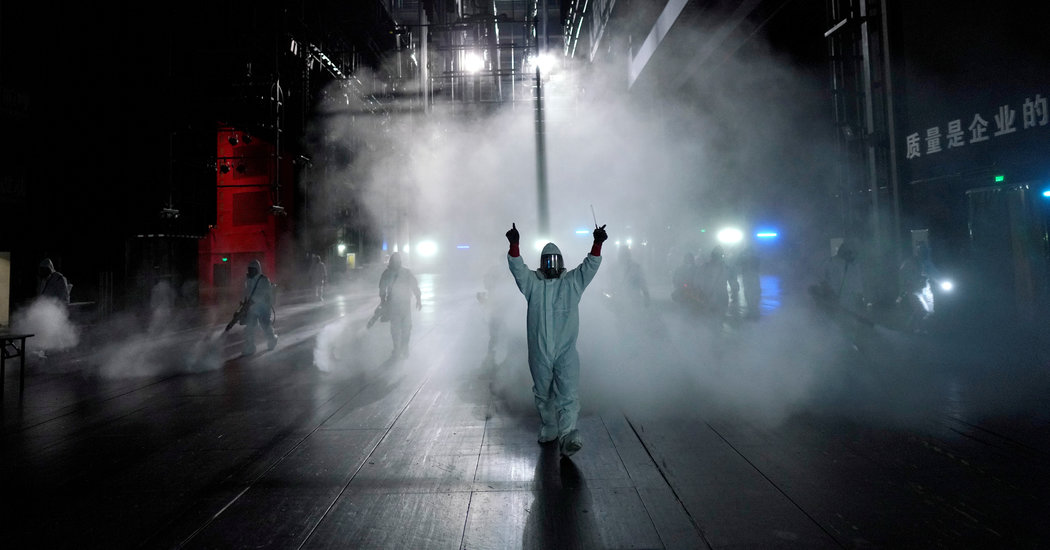 The coronavirus has given rise to a flood of conspiracy theories, disinformation and propaganda, eroding public trust and undermining health officials in ways that could elongate and even outlast the pandemic.

Claims that the virus is a foreign bioweapon, a partisan invention or part of a plot to re-engineer the population have replaced a mindless virus with more familiar, comprehensible villains. Each claim seems to give a senseless tragedy some degree of meaning, however dark.

Rumors of secret cures — diluted bleach, turning off your electronics, bananas — promise hope of protection from a threat that not even world leaders can escape.

The belief that one is privy to forbidden knowledge offers feelings of certainty and control amid a crisis that has turned the world upside down. And sharing that “knowledge” may give people something that is hard to come by after weeks of lockdowns and death: a sense of agency.

“It has all the ingredients for leading people to conspiracy theories,” said Karen M. Douglas, a social psychologist who studies belief in conspiracies at the University of Kent in Britain.

Rumors and patently unbelievable claims are spread by everyday people whose critical faculties have simply been overwhelmed, psychologists say, by feelings of confusion and helplessness.

But many false claims are also being promoted by governments looking to hide their failures, partisan actors seeking political benefit, run-of-the-mill scammers and, in the United States, a president who has pushed unproven cures and blame-deflecting falsehoods.

The conspiracy theories all carry a common message: The only protection comes from possessing the secret truths that “they” don’t want you to hear.

The feelings of security and control offered by such rumors may be illusory, but the damage to the public trust is all too real.

It has led people to consume fatal home remedies and flout social distancing guidance. And it is disrupting the sweeping collective actions, like staying at home or wearing masks, needed to contain a virus that has already killed more than 79,000 people.

“We’ve faced pandemics before,” said Graham Brookie, who directs the Atlantic Council’s Digital Forensic Research Lab. “We haven’t faced a pandemic at a time when humans are as connected and have as much access to information as they do now.”

This growing ecosystem of misinformation and public distrust has led the World Health Organization to warn of an “infodemic.”

“You see the space being flooded,” Mr. Brookie said, adding, “The anxiety is viral, and we’re all just feeling that at scale.”

The Allure of ‘Secret Knowledge’

“People are drawn to conspiracies because they promise to satisfy certain psychological motives that are important to people,” Dr. Douglas said. Chief among them: command of the facts, autonomy over one’s well-being and a sense of control.

If the truth does not fill those needs, we humans have an incredible capacity to invent stories that will, even when some part of us knows they are false. A recent study found that people are significantly likelier to share false coronavirus information than they are to believe it.

“The magnitude of misinformation spreading in the wake of the Covid-19 pandemic is overwhelming our small team,” Snopes, a fact-checking site, said on Twitter. “We’re seeing scores of people, in a rush to find any comfort, make things worse as they share (sometimes dangerous) misinformation.”

Widely shared, Instagram posts falsely suggested that the coronavirus was planned by Bill Gates behalf of pharmaceutical companies. In Alabama, Facebook posts falsely claimed that shadowy powers had ordered sick patients to be secretly helicoptered into the state. In Latin America, equally baseless rumors have proliferated that the virus was engineered to spread H.I.V. In Iran, pro-government voices portray the disease as a Western plot.

If the claims are seen as taboo, all the better.

The belief that we have access to secret information may help us feel that we have an advantage, that we are somehow safer. “If you believe in conspiracy theories, then you have power through knowledge that other people don’t have,” Dr. Douglas said.

Italian media buzzed over a video posted by an Italian man from Tokyo, where he claimed that the coronavirus was treatable but that Italian officials were “hiding the truth.”

Other videos, popular on YouTube, claim that the entire pandemic is a fiction staged to control the population.

Still others say that the disease is real, but its cause isn’t a virus — it’s 5G cellular networks.

One YouTube video pushing this falsehood, and implying that social distancing measures could be ignored, has received 1.9 million views. In Britain, there has been a rash of attacks on cellular towers.

Conspiracy theories may also make people feel less alone. Few things tighten the bonds of “us” like rallying against “them,” especially foreigners and minorities, both frequent scapegoats of coronavirus rumors and much else before now.

But whatever comfort that affords is short-lived.

Over time, research finds, trading in conspiracies not only fails to satisfy our psychological needs, Dr. Douglas said, but also tends to worsen feelings of fear or helplessness.

And that can lead us to seek out still more extreme explanations, like addicts looking for bigger and bigger hits.

The homegrown conspiracists and doubters are finding themselves joined by governments. Anticipating political backlash from the crisis, government leaders have moved quickly to shunt the blame by trafficking in false claims of their own.

A senior Chinese official pushed claims that the virus was introduced to China by members of the United States Army, an accusation that was allowed to flourish on China’s tightly controlled social media.

In Venezuela, President Nicolás Maduro suggested that the virus was an American bioweapon aimed at China. In Iran, officials called it a plot to suppress the vote there. And outlets that back the Russian government, including branches in Western Europe, have promoted claims that the United States engineered the virus to undermine China’s economy.

In the former Soviet republics of Turkmenistan and Tajikistan, leaders praised bogus treatments and argued that citizens should continue working.

But officials have hardly refrained from the rumor mongering in more democratic nations, particularly those where distrust of authority has given rise to strong populist movements.

Matteo Salvini, the leader of Italy’s anti-migrant League Party, wrote on Twitter that China had devised a “lung supervirus” from “bats and rats.”

And President Jair Bolsonaro of Brazil has repeatedly promoted unproven coronavirus treatments, and implied that the virus is less dangerous than experts say. Facebook, Twitter and YouTube all took the extraordinary step of removing the posts.

President Trump, too, has repeatedly pushed unproven drugs, despite warnings from scientists and despite at least one fatal overdose of a man whose wife said he had taken a drug at Mr. Trump’s suggestion.

Mr. Trump has accused perceived enemies of seeking to “inflame” the coronavirus “situation” to hurt him. When supplies of personal protective equipment fell short at New York hospitals, he implied that health workers might be stealing masks.

His allies have gone further.

Senator Tom Cotton, Republican of Arkansas, and others have suggested that the virus was produced by a Chinese weapons lab. Some media allies have claimed that the death toll has been inflated by Mr. Trump’s enemies.

“This kind of information suppression is dangerous — really, really dangerous,” Mr. Brookie said, referring to Chinese and American efforts to play down the threat of the outbreak.

It has nourished not just individual conspiracies but a wider sense that official sources and data cannot be trusted, and a growing belief that people must find the truth on their own.

A cacophony arising from armchair epidemiologists who often win attention through sensational claims is at times crowding out legitimate experts whose answers are rarely as tidy or emotionally reassuring.

They promise easy cures, like avoiding telecommunications or even eating bananas. They wave off the burdens of social isolation as unnecessary. Some sell sham treatments of their own.

“Medical conspiracy theories have the power to increase distrust in medical authorities, which can impact people’s willingness to protect themselves,” Daniel Jolley and Pia Lamberty, scholars of psychology, wrote in a recent article.

Such claims have been shown to make people less likely to take vaccines or antibiotics, and more likely to seek medical advice from friends and family instead of from doctors.

Belief in one conspiracy also tends to increase belief in others. The consequences, experts warn, could not only worsen the pandemic, but outlive it.

Medical conspiracies have been a growing problem for years. So has distrust of authority, a major driver of the world’s slide into fringe populism. Now, as the world enters an economic crisis with little modern precedent, that may deepen.

The wave of coronavirus conspiracies, Dr. Jolley and Dr. Lamberty wrote, “has the potential to be just as dangerous for societies as the outbreak itself.”