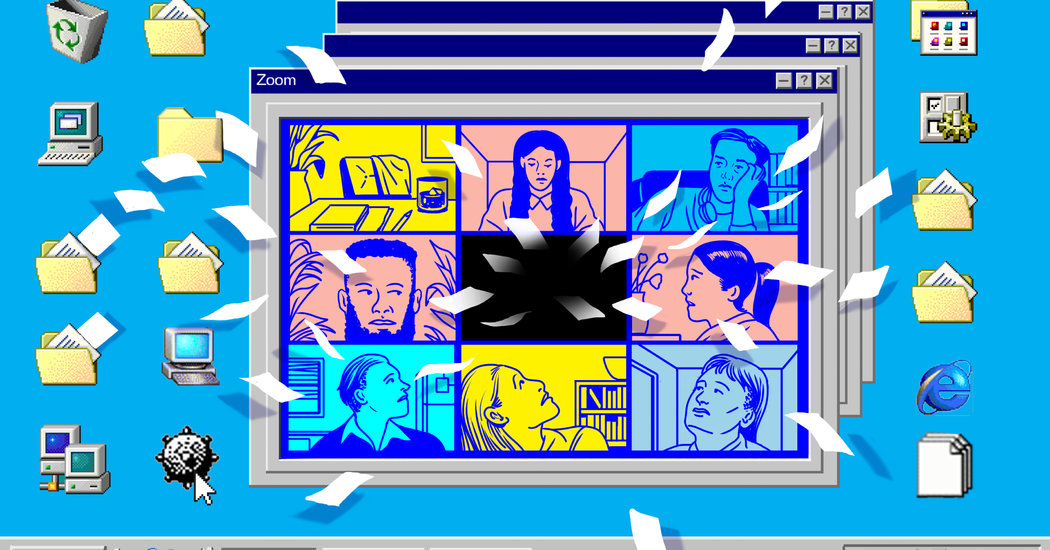 Ever since many of us started working from home in the coronavirus pandemic, I’ve been invited to countless gatherings taking place on Zoom, the videoconferencing app. Virtual happy hours, work meetings, dinners, you name it.

I’ve been a no-show, and it’s not just because my hair has grown embarrassingly long. It’s because I have a fundamental problem with Zoom.

Let me first say I understand why Zoom has been so popular in the pandemic. The company designed its app to be free and extremely easy to use; in tech lingo, we call it “frictionless.” Even our friends and relatives with zero technical know-how can join a Zoom meeting just by clicking a link. Then, voilà, you are looking at a screen with familiar faces and can begin chatting away.

At least 200 million of us, desperate to see people outside our homes, now use Zoom, up from 10 million a few months ago. Many of us use it for free, though Zoom also has a paid product. For lots of us, it’s a lifeline to see and converse with a friend or relative.

But for the last year, I’ve been wary of the app. Zoom has had multiple privacy snafus in that period, which have come up so frequently that they became a game of Whac-a-Mole.

The missteps included a weakness that would have allowed malware to attach to Zoom and hijack our web cameras. The issues with basic security practices culminated with “Zoombombing,” in which trolls crashed people’s video meetings and bombarded them with inappropriate material like pornography.

In a blog post last week, Zoom’s chief executive, Eric Yuan, apologized for all the mistakes and said the recent problems had largely been addressed. The company promised to focus on fixing its privacy and security issues over the coming months; it reiterated the plan on Wednesday.

If there is something déjà vu about all of this, you aren’t wrong. That’s because we find ourselves dealing with the same situation over and over again, where we find easy-to-use tech products and focus on their convenience over issues like data security and privacy.

We went through this not long ago with Ring, the doorbell camera, another product with a catchy name. Ring, which is owned by Amazon, became popular during another crummy situation: an increase in the petty crime of package thefts. It was also easy to install. But despite glowing customer reviews, Ring became mired in privacy scandals, including one that involved hackers hijacking the Ring cameras of multiple families.

The lesson is one we need to learn and relearn. When a company fails to protect our privacy, we shouldn’t just continue to use its product — and tell the people we care about to use it — just because it works well and is simple to use. Once we lose our privacy, we rarely get it back again.

“There’s a revolving door,” said Matthew Guariglia, a policy analyst for the Electronic Frontier Foundation, a digital rights nonprofit. “When you give your data to one company, you have no idea who else is going to have access to it, because so much of it happens behind the black box of company secrecy.”

The onus is certainly on Zoom, not us, to fix the privacy and security problems of its app. But we can put pressure on Zoom by not accepting the situation. If you do use Zoom, do so with caution and strong security settings. More on this later.

Let’s first take a closer look at why Zoom has been under the microscope. The issues boil down to two main things: its privacy policy and the architecture of its security.

Zoom recently announced that it had revised its privacy policy to be clearer and more transparent. In it, the company emphasized that it does not and has never sold people’s personal data, and has no plans to.

But the policy does not address whether Zoom shares data with third parties, as other companies such as Apple and Cisco explicitly state in their privacy policies.

This is a notable omission. Tech companies can monetize user data in many ways without directly selling it, including by sharing it with other companies that mine the information for insights, according to research published by M.I.T. Sloan School of Management. In some cases, tools to collect data from users get “rented” to third parties. Such practices would technically make it true that your personal data was not “sold,” but a company would still make money from your data.

Lynn Haaland, Zoom’s global risk and compliance officer, said the company does not anonymize or aggregate user data or rent it out in exchange for money.

“We try to be clear here about what we do do with the data,” Ms. Haaland said about the updated policy. “Sometimes when you try to list all the things you don’t do with data, if you leave one out, then people say, ‘Oh, well, you must be doing that.’”

While Zoom has worked furiously to plug the security holes that have emerged in the last few weeks, its products for Windows and Mac computers have weaker security by design.

That is largely because the company opted not to provide its app through Apple’s official Mac app store or the Microsoft Windows app store. Instead, consumers download it directly from the web. In this way, Zoom’s software avoids living in a so-called sandboxed environment, which would have restricted its access to Apple and Microsoft operating systems.

As a result, Zoom is able to access deeper parts of the operating systems and their web browsers. That is largely what makes Zoom sessions so simple to join.

“They want to make the installation process a lot easier and streamlined, but at the same time they want deeper hooks into the operating system so they can collect more things,” he said. “That also exposes us to potential vulnerabilities.”

Use Zoom at Your Own Risk

So what to do? In these difficult times, many of us have no better option than to use Zoom. So here are some steps to keep in mind.

And us? It may be our turn to pause too.