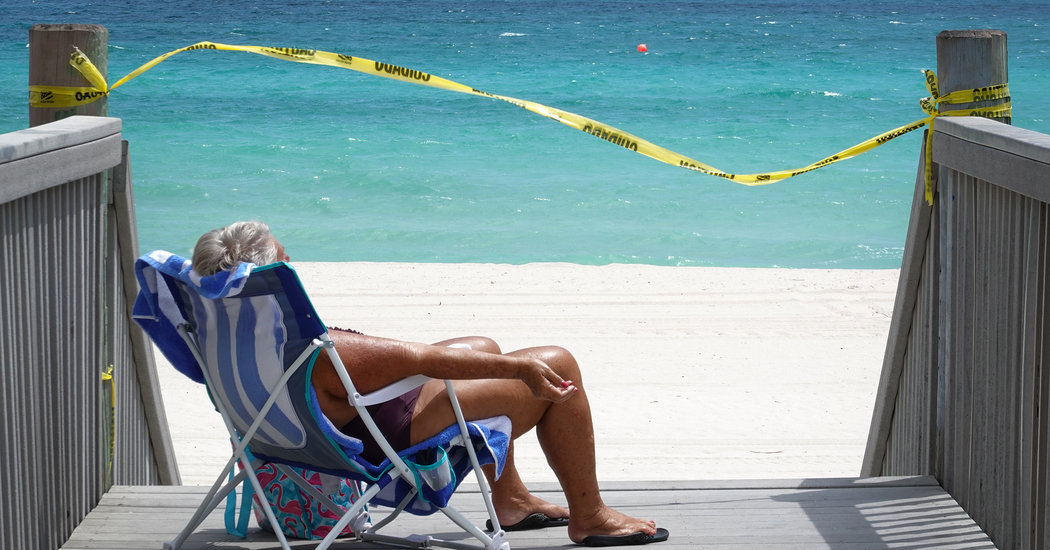 The homebound and virus-wary across the Northern Hemisphere, from President Trump to cooped-up schoolchildren, have clung to the possibility that the coronavirus pandemic will fade in hot weather, as some viral diseases do.

But the National Academies of Sciences, Engineering and Medicine, in a public report sent to the White House, has said, in effect: Don’t get your hopes up. After reviewing a variety of research reports, a panel concluded that the studies, of varying quality of evidence, do not offer a basis to believe that summer weather will interfere with the spread of the coronavirus. The pandemic may lessen because of social distancing and other measures, but the evidence so far does not inspire confidence in the benefits of sun and humidity.

The report, sent to Kelvin Droegemeier, director of the Office of Science and Technology Policy at the White House and acting director of the National Science Foundation, was a brief nine-page communication known as a rapid expert consultation.

Kristian Andersen, an immunologist at the Scripps Research Translational Institute in California and a member of the Standing Committee on Emerging Infectious Diseases and 21st Century Health Threats at the National Academies, said: “Given current data, we believe that the pandemic likely will not diminish because of summer, and we should be careful not to base policies and strategies around the hope that it will.”

“We might very well see a reduction in spread in the beginning of the summer,” he added, “but we have to be careful not to put that down to a changing climate — it is plausible that such a reduction could be due to other measures put in place.”

The report from the National Academies, independent agencies that advise the government and the public, cited a small number of well-controlled laboratory studies that show that high temperature and humidity can diminish the ability of the novel coronavirus to survive in the environment. But the report noted the studies had limitations that made them less than conclusive.

It also noted that although some reports showed pandemic growth rates peaking in colder conditions, those studies were short and limited. A preliminary finding in one such study, by scientists at M.I.T., found fewer cases of Covid-19, the disease caused by the coronavirus, in warmer climates, but arrived at no definitive conclusion.

“Specially in the U.S., any effect, even in the summer months, may not be highly visible, so our real chance to stop this virus is indeed through taking quarantine measures,” said Qasim Bukhari, a computational scientist at M.I.T. who is a co-author of the study.

The report sent to the White House also struck a cautionary note: “Given that countries currently in ‘summer’ climates, such as Australia and Iran, are experiencing rapid virus spread, a decrease in cases with increases in humidity and temperature elsewhere should not be assumed,” it said.

Pandemics do not behave the same way seasonal outbreaks do. For the National Academies’ report, researchers looked at the history of flu pandemics as an example. “There have been 10 influenza pandemics in the past 250-plus years — two started in the Northern Hemisphere winter, three in the spring, two in the summer and three in the fall,” the report said. “All had a peak second wave approximately six months after emergence of the virus in the human population, regardless of when the initial introduction occurred.”

On March 16, President Trump said the virus might “wash” through in warmer weather.

Dr. Anthony S. Fauci, the nation’s leading expert on infectious diseases, has expressed different opinions about the effect of summer on the virus, some more optimistic than others. In a live-streamed interview on Wednesday, Dr. Howard Bauchner, the editor in chief of The Journal of the American Medical Association, asked him about the fall, which Dr. Fauci said would be very challenging, after a period this summer when “it’s almost certainly going to go down a bit.”

On March 26, however, in a conversation on Instagram with Stephen Curry of the Golden State Warriors, Dr. Fauci said that although it wasn’t unreasonable to assume the summer weather could diminish the spread, “you don’t want to count on it.”