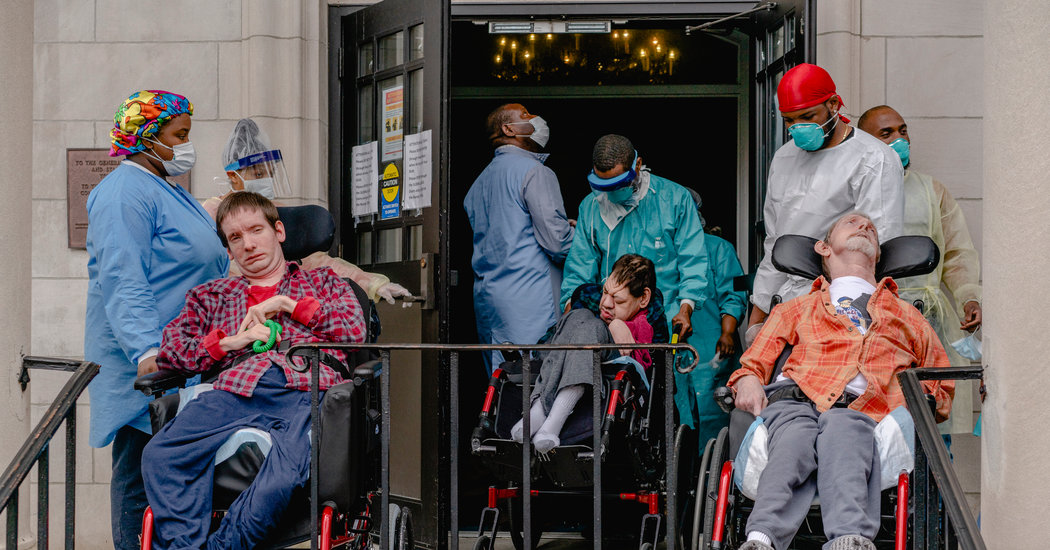 As a result, symptomatic residents returned home, probably leading to a further increase in cases.

By March 26, Northwell sent over several nurses in protective gear, who moved through the building conducting tests on both the residents and the staff.

Arios Eugene, who manages the residence, called it a “scary day.”

“They came in — they were dressed in gowns and masks, all dressed up to protect themselves — and went from room to room,” he recalled, adding that the gravity of the situation hit him. “It was real. It was like, ‘Oh my God, this is real. It’s hit our front door.’”

Some staff members began crying, and he tried to reassure them.

The next day, Mr. McGuire, a former caregiver himself, delivered a message to his staff, his hands resting on the knees of his bluejeans. He urged those who had left to return.

“For those of you who haven’t been on the battleground, I will tell you, it’s been difficult,” he said. “Everybody in this agency does saintly things every day.”

There were numerous challenges. Fragile residents had to be left alone at hospitals. James Moran, the chief executive of Care Design, which manages the care of residents in homes across the state, has been working with the state to relax such rules for the developmentally disabled.

“In many cases they can’t speak for themselves, or have anxiety issues, with nobody there who they know who can support them,” he said.

Protective gear was also in short supply at the Bayville home and throughout the system. Mike Alvaro, treasurer of New York Disability Advocates, said that it was a struggle to ensure “that the face masks and the gowns and gloves are there,” and that already stretched budgets were being tested.