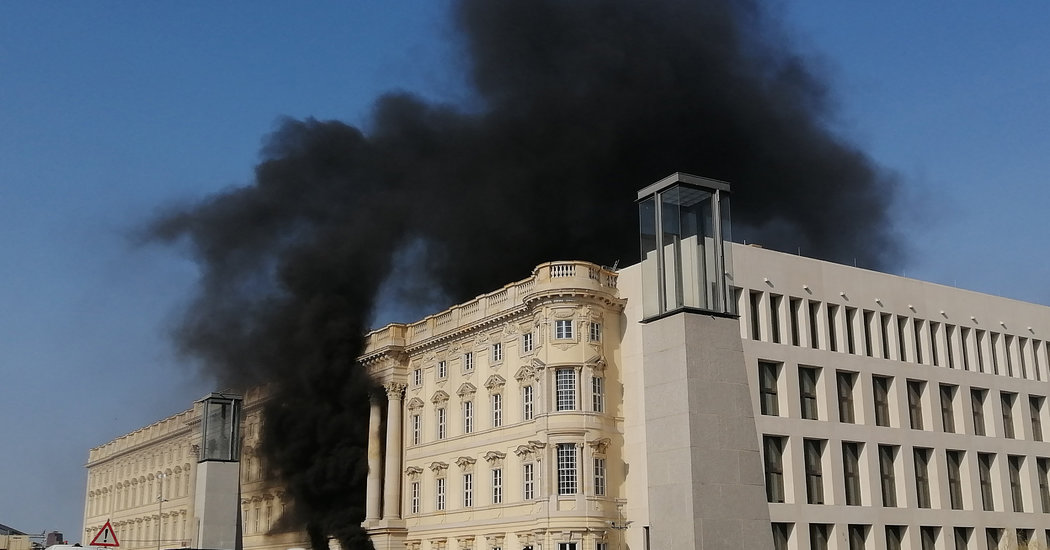 BERLIN — It has been rocked by protests and beset by technical delays. And, on Wednesday, the Humboldt Forum, the huge new museum under construction in the center of Berlin, suffered another blow.

Just before 10 a.m., two tar cookers exploded at the site, injuring one worker and sending black smoke spiraling over the city.

“It emitted a lot of smoke, so it looked really dangerous,” said Michael Mathis, a spokesman for the museum, in a telephone interview.

About 80 firefighters were on site until the fire was extinguished, Björn Radünz, a speaker for the Berlin fire department, said in a telephone interview. Thirty remained on site to perform safety checks, Mr. Radünz said.

Soon after the blaze was extinguished, the Berlin police department wrote on Twitter that it was being treated as an accident.

Smoke had blackened one of the museum’s entrances, Mr. Mathis said, but he would not comment on whether the explosion would cause further delays. “We’re also facing coronavirus, and what that means for the opening in September,” he said.

Berlin, like all of Germany, is on lockdown, although people are allowed outside their homes for reasons including essential work, shopping, exercising and buying food. Though playgrounds are closed, parks have been full as the city enjoyed spring weather in recent days.

Institutions like museums are closed, but construction sites are exempt from the lockdown. The fire department said work could resume on part of the museum site shortly after the fire was extinguished.

The Humboldt Forum is a $700 million project that, when complete, will be a home for the ethnographic collections from several Berlin museums. It will contain numerous items taken from former European colonies, including objects from Germany’s former dominions in eastern Africa, and hundreds of Benin Bronzes looted by British soldiers from Benin City in 1897, in what is now Nigeria.

Some activists say these items should be returned to their countries of origin, and have protested that the museum has not done enough to research their origins and facilitate returns.

The Humboldt Forum was originally meant to open at the end of last year, but the museum postponed the inauguration citing technical problems, including with its air conditioning system.