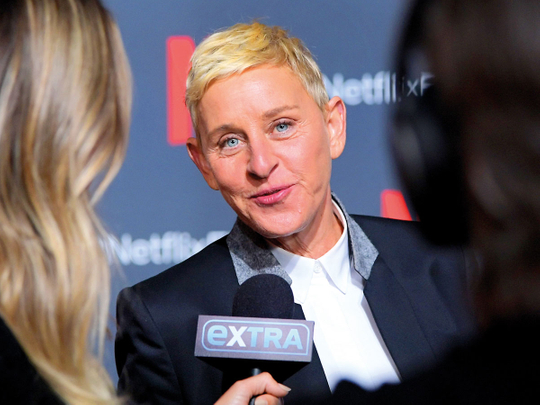 After suspending production on her daytime talk show due to the ongoing coronavirus pandemic, Ellen DeGeneres turned to YouTube earlier this week to kick off the “at-home edition” of her show. For the 62-year-old comedian, this translated to speaking in front of a camera while seated in her luxurious living room, outfitted with floor-to-ceiling windows facing a lush yard.

“One thing that I’ve learned from being in quarantine is that people — this is like being in jail, is what it is,” DeGeneres said in the video. “It’s mostly because I’ve been wearing the same clothes for 10 days and everyone in here is gay. The jokes that I have. I feel bad for the kids at home, all the college students, all the parents. I feel bad for a lot of people. But I think that a lot of people out there need words of encouragement, and that’s what I want to do.”

The comparison to jail, made between DeGeneres’s trademark pleasantries, struck many as tone-deaf, given the current state of American prisons — plus the fact that, as Vulture noted, DeGeneres and her wife, actress Portia de Rossi, have purchased multiple mansions with price tags in the multimillions. As of Wednesday afternoon, the YouTube video appeared to have been made private.

“What a great look for Ellen as thousands of people sit in actual jail cells just hoping for the best without soap and basic protections,” tweeted Variety television critic Caroline Framke. Last week, the top doctor at Rikers Island referred to the New York jail as a “public health disaster unfolding before our eyes.”

Another Twitter user described the joke as “unconscionable, especially while people are literally dying of covid because they are in jail.” Several compared it to a satirical Reductress article with the headline “’It’s Sort of Like Being in Prison,’ Says Woman Eating Yogurt in Bed Who Also Has Voting Rights.”

DeGeneres has long used her show as a platform to preach kindness, and she expressed in the video that she designed it “as a distraction, as a break from whatever’s going on out there that may be unpleasant.” Much of the time, she succeeds and is applauded for her positive contributions.

But that framing has also landed her in hot water. Last fall, for instance, when DeGeneres was spotted at a Dallas Cowboys game with former president George W. Bush, many questioned why she, as a gay woman and advocate for LGBTQ rights, was friendly with a politician whose administration restricted those same rights and, among other actions, launched a deadly war in Iraq. The host defended her friendship with Bush on her show, saying that she’s “friends with a lot of people who don’t share the same beliefs I have.” But others such as actor Mark Ruffalo, who is quite vocal about his politics, shared a Vanity Fair article on the “limits of kindness” and called for accountability.

The backlash to DeGeneres’ most recent comment hasn’t reached the level of the Bush incident, but it falls in line with much of the criticism that has been directed toward celebrities in this pandemic. In a recent piece titled “Celebrity Culture Is Burning,” New York Times writer Amanda Hess noted that many celebrity attempts at outreach have done more harm to their images than good. (For more proof, one need only look to the widely maligned, Gal Gadot-led cover of “Imagine.”)

“The famous are ambassadors of the meritocracy; they represent the American pursuit of wealth through talent, charm and hard work,” Hess states. “But the dream of class mobility dissipates when society locks down, the economy stalls, the death count mounts and everyone’s future is frozen inside their own crowded apartment or palatial mansion.”