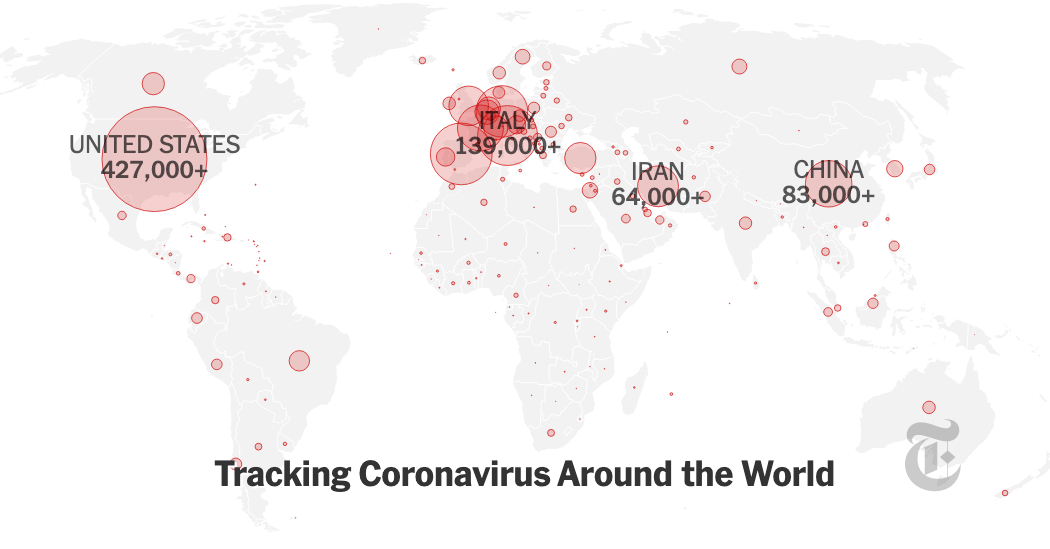 Why N.Y. has so many cases: ‘Everything was slow’

The coronavirus struck the U.S. first on the West Coast, but hardest in New York, where at least 6,268 people have died since the state’s first positive test on March 1. “The bad news isn’t just bad,” Gov. Andrew M. Cuomo said Wednesday. “The bad news is actually terrible.”

It’s likely that nothing could have completely prevented America’s biggest and densest metropolis from being walloped. But early on, when swift action might have made a big difference, the official response was hampered by confused guidance, unheeded warnings, delayed decisions and political infighting, a team of Times reporters found.

The virus “was spreading widely in New York City before anyone knew it,” said Dr. Thomas R. Frieden, a former head of both the Centers for Disease Control and Prevention and the New York City Health Department.

Dr. Frieden said that if the state and city had acted a week or two earlier to order social distancing, close businesses and tell people to stay home, the outbreak might have claimed half as many lives, or even fewer. But New York was days behind California and Washington State in taking those measures.

Rural populations tend to be older, poorer and less healthy than the national average. Health care systems in rural areas often lack resources and are short on doctors and nurses.

“A lot of communities are an hour’s drive or more from an I.C.U. bed, and some of them don’t have hospitals,” said Jack Healy, who covers rural places for The Times. “While the numbers are smaller, they could be overwhelmed easier. If a couple of nurses get sick, that may be a huge portion of the staff at a smaller clinic.”

Rural areas are also concerned that they may not have enough clout to compete for scarce resources against places like New York and Seattle, Jack said. The financial burden from the virus outbreak is also squeezing smaller hospitals, and some are closing.

“It’s akin to taking heavy artillery off the field during a battle,” Jack said. “It’s astonishing.”

What we know about chloroquine

As doctors and researchers scramble to find treatments for Covid-19, one drug has attracted outsize attention: hydroxychloroquine, a prescription medicine frequently used to treat malaria, rheumatoid arthritis and lupus.

President Trump has promoted the drug repeatedly in televised briefings, despite warnings from his own health officials that there is little data to support its widespread use.

Here’s where the science currently stands.

One lab study found that it may block the virus from invading cells. Drugs that conquer viruses in petri dishes do not necessarily work in people, though: In earlier studies, hydroxychloroquine failed to prevent or treat other viral illnesses in humans, including influenza.

Is it being given to coronavirus patients now?

Yes. Clinical trials with control groups have begun around the world, including one in the United States involving 510 patients at 44 medical centers.

Early studies suggested some benefit in patients with mild cases, but much of that research was done without proper controls; scientists agree that more rigorous testing is needed.

If I can get hydroxychloroquine on my own, should I take it?

No. There is no evidence yet that the drug can keep healthy people from getting infected, and it can have significant side effects. There are concerns that it may not be safe for people whose organs have been damaged by the virus.

And if you are buying it on the street or the internet, what you get may be fake or unsafe. An Arizona man in his 60s died last month after swallowing an aquarium cleaning product that had chloroquine on its label.

Stay safe when running errands. The C.D.C. has a guide on how to safely gas up the car, shop for groceries, receive a delivery or visit the doctor.

Find moments of solace away from the children. Crying in your car counts as self-care. The same goes for meditation. Our parenting column offers other ways to find headroom, or even joy.

Look good on your computer camera. Tom Ford gave us some staging tips, including putting a white cloth or sheet of paper on the table between you and your computer, to bounce up a little extra fill light.

Is your takeout order saving the restaurant or risking lives? It’s complicated. Our California critic, Tejal Rao, says the answer may lie in how well the restaurant protects its workers.

My daughter and I live half an hour’s drive away from each other. We used to get together for “Sunday Fun-day” each week. Now we have “Sunday Trunk-day.” I fill the trunk of my car with goodies: fresh baked lasagna and cookies, assorted groceries and snacks, games. When I arrive she unloads the goodies, and then we chat through the window with her standing at least six feet back. I miss my hugs, but we make do.