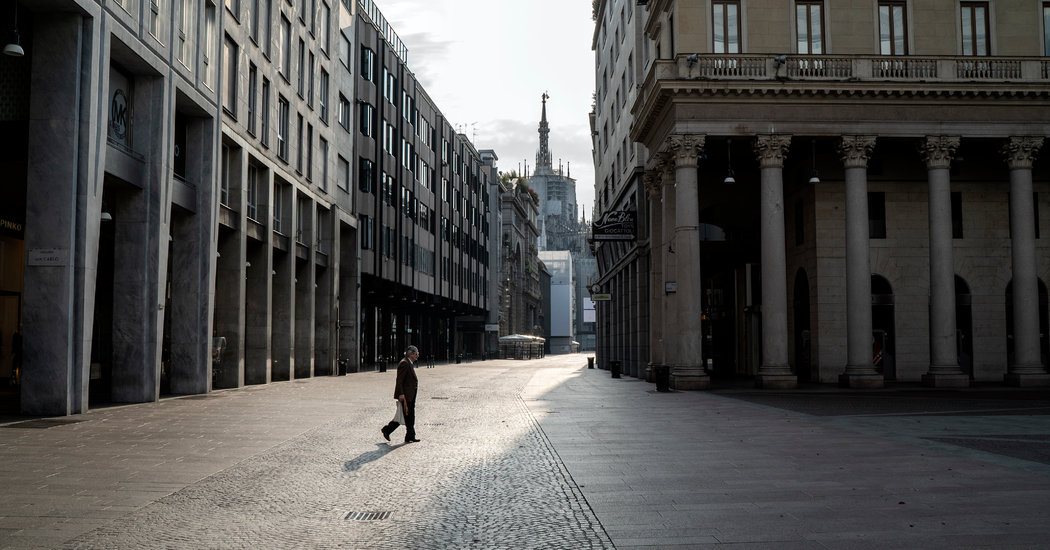 BRUSSELS — As a poorer, battered south asks a richer, frugal north for solidarity, you’d be forgiven for thinking the coronavirus is throwing Europe back into last decade’s economic catastrophe. You’d be wrong. This time is set to be far worse.

The pandemic and the havoc the coronavirus is wreaking on European economies has echoes of the eurozone debt crisis, but this calamity is hitting everyone, not just smaller wayward nations, and it goes well beyond the economy. It presents a watershed moment for the future shape of the European project.

A growing number of officials and analysts believe the European Union needs an enormous financial response on a scale commensurate with the calamity. Short of that, they warn, the bloc risks inviting an even larger disaster, as well as losing legitimacy.

“There are obvious links to the lack of solidarity with the eurozone crisis era of austerity and the handling of the migration crisis,” said Janis Emmanouilidis, a senior analyst at the Brussels-based think tank European Policy Center. “People now are also asking, ‘What do we have the European Union for?’”

The very scale of the looming depression is focusing the minds of European leaders, and the fact that this crisis, unlike last time, does not come from some perceived profligacy may ultimately knock down the reluctance to putting up aid. The question is what shape that solidarity will take.

European finance ministers failed to reach an agreement over a list of measures in a marathon meeting that started on Tuesday and broke up Wednesday morning. They will reconvene on Thursday to try to hammer out a consensus on how to stave off the worst of the looming economic maelstrom.

European officials said that there was broad agreement on some measures, for example a loan program valued at 100 billion euros, or $109 billion, that will help member states fund temporary unemployment benefits.

But despite debating for 16 hours, the ministers were unable to reach a consensus on how to use the euro area bailout fund, created to tackle last decade’s crisis, to distribute loans without the brutal austerity restrictions Greece had to face. The European Investment Bank, it seems likely, will provide billions in support of small businesses.

Once the finance ministers reach an agreement, their bosses, the leaders of the European Union countries, will meet via teleconference to finalize the measures, which in total could amount to hundreds of billions of euros.

But as sweeping as those measures may be, they will disappoint some members.

At least nine of the 19 leaders of the countries in the common-currency bloc, and some leading policymakers in Brussels, believe the euro area needs to issue joint bonds, commonly referred to as “Eurobonds” or in the context of the current crisis, “corona-bonds.”

In the acrimonious overnight meeting, finance ministers from those countries demanded at the very least a reference to this approach in any final report, but it proved impossible to get an agreement.

Collective debt would be a first for the bloc, and has been fiercely opposed by wealthier states like Germany and the Netherlands. They argue that, by treaty, every member nation of the European Union is responsible for its own finances. Floating these bonds would also be legally difficult and time-consuming, opponents say.

“Each member state has launched its own interventions, and if we aggregate those, we’re talking about rather big figures,” said Paolo Gentiloni, the European commissioner for the economy and a former Italian prime minister, who supports the idea of joint bonds. “But we are a union, 19 member states who have a common currency.”

Key to this is a question that has been nagging for nearly two decades: How can 19 of the now 27 European Union countries share a currency, the euro, and not use some, even limited, common debt to weather crises?

And the coronavirus counts as a crisis by any measure. The currency union’s third- and fourth-largest economies, Italy and Spain, seem set to shrink by more than 10 percent, while the largest, Germany, could also shrink by 10 percent, unleashing a domino effect. By comparison, the euro area shrank by 4.5 percent in the post-financial crisis recession in 2009.

The stimulus that will be needed because of the damage caused by the epidemic is being estimated at more than €2 trillion, or $2.18 trillion. At stake won’t be just the survival and recovery of each individual economy, but potentially the survival of the euro.

“Eurobonds are the solution, a serious and efficient response, adapted to the emergency we are living,” said Prime Minister Giuseppe Conte of Italy in an impassioned address to the nation on Monday.

Prime Minister Pedro Sánchez of Spain, where the death toll has approached 14,000, has called for a new Marshall Aid plan for the reconstruction of Europe.

“Without solidarity there can be no cohesion, without cohesion there will be disaffection and the credibility of the European project will be severely damaged,” he warned.

Europe’s de facto top leader, Chancellor Angela Merkel of Germany, this week called the coronavirus outbreak and its aftermath the “greatest test for the European Union since its inception.”

“Germany will only do well in the long run if Europe is doing well,” Ms. Merkel told reporters at a news conference. The answer to current events, she said, was “more Europe, a stronger Europe — and a well-functioning Europe in all its parts, meaning in all its member states.”

For Ms. Merkel, loans with few strings attached and German subsidies for unemployment benefits elsewhere in Europe were already quite brave measures, and as far as she was prepared to go.

She and other northern European leaders have signed off on waiving rules that normally punish European countries for running high deficits.

They have also implicitly backed a decision by the European Central Bank to launch a new bond-buying program that will see it swoop up the debt of eurozone countries, buying time for leaders to work out their next moves.

Joint debt has been a foundational step in the creation of federal states, most notably of the United States in the late 18th century,

In Europe in the age of coronavirus, it has been elevated to an existential question for the future of the bloc.

“Why? Because these bonds imply a clear and explicit sharing of the cost incurred to fight the Covid-19 crisis, as a symbol of European solidarity,” says Silvia Merler, head of research at the Algebris Policy Forum, the research branch of an investment fund based in Milan.

“But they are by no means the only tools on the table,” she added.

One key obstacle to joint debt is the scar tissue from the eurozone debt crisis of last decade, in which the bloc paid hundreds of billion of euros to Greece and another four countries, demanding in exchange some of the harshest austerity measures in modern history, to ensure no nation sought such bailouts opportunistically in future.

The wounds of that crisis are still deep, as is the feeling in Italy and Greece that the European Union was also not there to help much with the migration crisis that peaked in 2015-2016.

Mr. Gentiloni and others are keen to stress that, despite a fleeting resemblance, this time is different.

“I think it is a completely different crisis,” Mr. Gentiloni said. “In itself this crisis is an equalizer, it is affecting — at different speed and intensity — more or less all of Europe, all countries, it is not concentrated like the financial and migration crises were.”

And the debate over how to respond is more mature too, experts noted, pointing to the fact that even conservative German economists were no longer talking about “solidarity” as if it meant “charity,” as they had in the past.

“When the Greek crisis started back at the end of 2009, the question of European solidarity was much more controversial,” Ms. Merler said. “Back then, policymakers could not even agree among themselves on whether it was legal for euro area countries to help financially a member in distress.”

As the debate over assuming joint debt goes on, the European approach in the meantime to fighting the coronavirus will look similar to how Europe tends to respond to crises: a patchwork of imperfect measures.

“They’ll build substandard instruments that are not good enough, but do the job at first, and they will keep kicking the can down the road,” said Shahin Vallée, a French economist who is a senior fellow at the German Council of Foreign Relations, and previously served as a senior adviser to the European Council during the eurozone crisis.

“It won’t be a make-or-break moment like some predict,” Mr. Vallée said. “Instead we’ll just continue to hobble along on our crutches.”