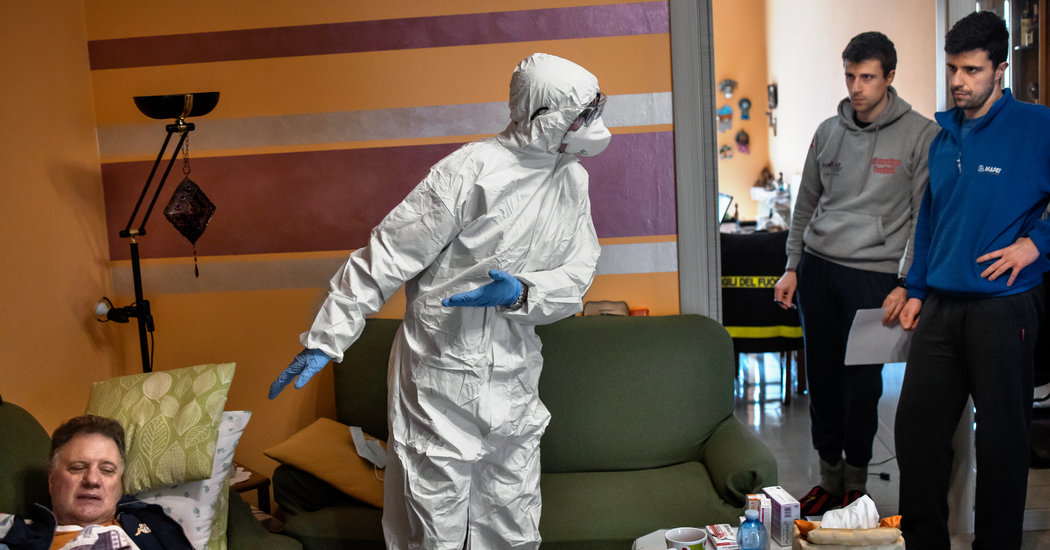 Francesco Moro cannot say with certainty how his 65-year-old father contracted the coronavirus, but he figures it has something to do with the fact that he and his older brother both fell ill a week earlier. Though the two sons are grown, they live with their parents in a modest home outside Bergamo, the epicenter of the Italian outbreak.

“The kitchen and the living room, the rooms that we share the most, are quite small.” said Mr. Moro, 28. “The probability of transmitting it is much higher.”

That logic has captured the attention of social scientists who are exploring a theory that may partly explain why the pandemic has proved especially deadly in Italy and Spain. In those countries, large numbers of working-age people live with their parents, and the younger people may be bringing the virus home and spreading it to their far more vulnerable, elderly parents.

Far from universally accepted, this hypothesis is the subject of fierce debate, after the publication of a research paper purporting to find a link between incidence of adults living with their parents and deaths from the virus. Some economists have challenged the rigor and validity of that analysis. Italians and Spaniards are pushing back on the notion that an element of cultural pride — multiple generations of families living under the same roof instead of offloading older people to senior homes — is now being construed as a deadly vulnerability.

The argument is unfolding just as armchair epidemiologists and self-appointed anthropologists indulge cultural stereotypes to speculate on matters of grave import. Some claim that Japan has seen fewer deaths because people bow rather than shake hands; others say that France has suffered because people insist on kissing.

In Italy and Spain, a cultural tendency toward intergenerational living appears to have been enhanced by an economic catastrophe that forced legions of jobless people to take refuge with their parents. In the decade after the global financial crisis of 2008, the share of Italians between the ages of 25 and 29 who were living with their parents rose to 67 percent from 61 percent, according to Eurostat. In Spain, the same cohort expanded to 63 percent from 51 percent.

The paper that provoked the argument over the relevance of such figures to the pandemic was the work of two economists at the University of Bonn in Germany, Christian Bayer and Moritz Kuhn. They plotted the percentage of people between 30 and 49 who live with their parents against the fatality rates for confirmed cases of the coronavirus as of the middle of March.

They found a striking correlation, positing this as a significant part of the explanation for why the virus had caused so many more deaths in Italy, which now has more any other nation, with nearly 14,000.

At the Peterson Institute for International Economics in Washington, Jacob F. Kirkegaard, a senior fellow, conducted a similar analysis while updating available mortality data through March 25. His work showed Italy and Spain to be clear outliers: Young adults in those countries were more than twice as likely to live with their parents as those in Germany, France and Britain. Spain’s mortality rate was more than three times as high as those other countries; Italy’s was at least six times as high.

“It’s really quite striking,” Mr. Kirkegaard said. “Many working people will be asymptomatic carriers. If you get a lot of old people infected, then you’re in trouble.”

Demographers at the University of Oxford last month released a study urging governments to tailor their social-distancing strategies to the conditions of individual countries, paying particular attention to age structures.

Italy has one of the highest ratios of older people on earth, the study noted, with 23 percent of the population at least 65, and striking degrees of “intergenerational contact.” Closing schools in Italy appeared risky, the study warned, because many parents would rely on their parents for child care, amplifying the threat of transmission from children to older people.

These analyses prompted concerted pushback from social scientists in Italy, who cited a truism: Correlation is not causation.

In a paper drafted from the economists at the University of Bonn as a rebuke of the work, five academics warned that comparing data across borders was an exercise fraught with methodological pitfalls. Given differences in testing from country to country, merely getting an accurate grasp of comparable mortality rates was difficult if not impossible, skewing any findings.

Scientists generally maintain that northern Italy became the locus of the pandemic in Europe because much of its industry is linked to China, with people going back and forth. The density of the region most likely enabled the virus to spread.

Though adults living with parents may indeed make the pandemic especially deadly, the skeptics acknowledge, many other characteristics mostly likely play a role, too. Italy relies on large, centralized hospitals that may facilitate transmission. Lifestyle factors could also be key.

“Here in Italy, it may be stupid to say, but we tend to stay close to each other,” said Francesco Drago, an economist at the University of Catania in Sicily. “We tend to touch, to hug. This can be another factor. The point is, without detailed data, micro-data, it’s difficult to draw policy implications.”

A less-than-authoritative indictment of intergenerational living could, he fears, be taken as impetus to warehouse older people in elder homes, where they would be at greater risk of spreading the virus to one another, with lethal consequences.

“If you concentrate elderly people, this can be worse,” he said.

In Spain, the public has been horrified to learn of older people found dead at nursing homes, some abandoned in their beds, including two dozen at a single center in Madrid.

But the researchers behind the demographic analysis say they are not making value judgments or calling for older people to be yanked from their homes. They are looking for indicators that can enable policymakers to protect people when a public health threat emerges.

“There is no one-country-fits-all policy,” said Mr. Kuhn. “We are saying that if you live in a country where it’s very prevalent that there is interaction across generations, where grandparents typically pick up kids at school, then, if a situation like this arises, maybe your policy measures should be different.”

In China, the authorities now say they erred in initially allowing people with mild symptoms to isolate at home, where they then passed the virus to relatives. China eventually forced people into mass quarantine facilities — a step that would most likely be anathema in democratic societies.

But even in Europe, the authorities might take early action — perhaps mandating that adults who live with older relatives immediately, begin working from home, ahead of broader policies.

In Italy, hotels have recently made rooms available for coronavirus patients unable to safely isolate at home. In the Lazio region, which includes Rome, about 3,000 beds in 15 hotels are being readied for quarantine, according to the national hotel association. In Milan, the first patients arrived at the four-star Michelangelo hotel in late March.

Jennifer Dowd, a professor of demography and population health at Oxford and the lead author of the Oxford paper, said better understanding of the demographic elements could allow hospitals to better anticipate the need for their beds.

“It’s more important to intervene early in these areas that have a lot of intergenerational contact,” she said.

In Spain, children tend to remain in their parents’ homes until they are 29, and grandparents often move in after retirement — especially if they are widowed.

This is how Ana Zambrano’s mother, María Candin, 70, moved in with her, her husband and their two children, both in their early 20s, sharing their home in a town outside the city of Zaragoza. Ms. Candin’s husband died eight years ago. She had just retired from her job cooking in a restaurant and did not want to be alone.

In the middle of March, her mother developed a fever, prompting Ms. Zambrano, 44, to isolate her, making her bedroom off-limits to everyone else. She has largely recovered. Her family can only speculate about how she had contracted the virus.

“We’re a very affectionate family, with lots of hugs and kisses,” said Ms. Zambrano, who works as an administrative assistant at an accounting firm. “My mother may have got it from any one of us.”

Outside Bergamo, in northern Italy, Flavio Moro, a retired electrical technician, was the last member of his family to contract the virus.

His sons, Francesco, who works as a graphic designer at a textile company, and Luca, 32, a software engineer, both live at home, allowing them to save toward renting their own places. They both suffered fevers at the beginning of March, and then lost their sense of taste, a coronavirus symptom. Then their 57-year-old mother fell ill. They all recovered at home.

The elder Mr. Moro would not prove as fortunate. After he experienced eight days of high fever along with coughing and nausea that prevented him from eating or drinking nearly anything, the family summoned an ambulance.

At the hospital, doctors diagnosed the coronavirus. His condition deteriorated. Unable to speak, he communicated with his family only by text.

All around him in the ward, his friends and neighbors were dying, moving him to cover his head “with a sheet and cry for an hour,” he wrote later, in a memoir about the experience.

Home now, Mr. Moro is stable and recovering. His sons wish they could turn back time and stay away from their father. He has almost no social life, limiting his risk to exposure. The last time he went out to shop for groceries, he donned a mask and gloves.

His sons are young and prone to wandering around. Francesco plays accordion in a folk band. Luca is a volunteer firefighter and a bass player in another band.

When the government urged people to isolate, they assumed that meant staying away from those outside the family.

“They made us feel we needed to separate from the old and the strangers,” he said, “not from the people we live with.”