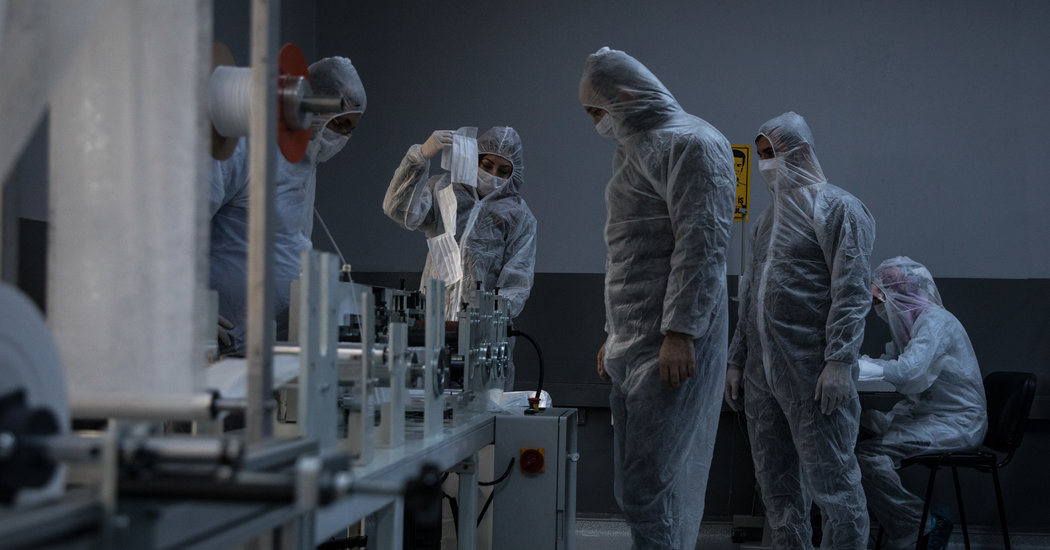 ISTANBUL — Turkey has ordered all citizens to wear masks when shopping or visiting crowded public places and announced that it will deliver masks to every family, free of charge, as coronavirus infections increase in the country of 80 million.

The order is the latest in a gradual tightening of antivirus measures by a government that has insisted that the virus was under control and has resisted a complete lockdown.

Turkey has over 34,000 confirmed cases of the virus and has registered 725 deaths. More than 1,400 patients are in intensive care units and at least 600 medical workers have been infected, according to figures released Tuesday by the Health Ministry.

The number of confirmed cases places Turkey among the top 10 currently worst affected countries, and reflects a steep rise since its first confirmed death from the disease on March 17.

The health minister, Dr. Fahrettin Koca, said on Monday, however, that the increase in confirmed cases was low compared with the increase in testing, which has been ramped up to more than 20,000 per day.

President Recep Tayyip Erdogan has introduced gradual measures to contain the spread of the coronavirus, asking people to stay at home and imposing a curfew on those over 65 and under 20, but has resisted a nationwide lockdown.

In televised speeches, he has repeatedly reassured Turks that the government has the virus under control. “Turkey is one of the most prepared countries for this global pandemic and the major crisis that has started with it,” he said in an address on Saturday.

Turkey has been praised by Western analysts for taking an early and proactive approach to the virus. It moved quickly to close travel with China, where the outbreak of the virus first occurred, and Iran, a major regional hub for the virus, and quarantined people returning from those countries.

But at the same time Turkey promoted itself as a safe destination for business and tourism. As the country faces an increasingly difficult economic downturn, and already suffers high unemployment and inflation, Mr. Erdogan sought to keep industry and tourism — an important source of income for the country — going.

Although little official data has been released on the spread of the virus in Turkey, Dr. Koca, who is a physician and founder of a private chain of hospitals, said the first known case of infection was in a person who had contact with Europe. He warned that the rise of infection in Europe presented a serious risk for Turkey.

Turkish media are citing official studies that show the main sources of infection are travelers arriving from Europe and religious pilgrims returning from the Middle East in the days before the first case was confirmed on March 11.

The two cities most affected are Istanbul, and the western city of Izmir, both centers of industry and tourism, with 60 percent of the cases coming from Istanbul, a city of 16 million.

Among the earliest cases in Turkey were a pharmacist and his employee in downtown Istanbul, and a trader, returning from Italy, who infected his relatives working in Istanbul’s Grand Bazaar, a large covered market in the city center.

Pilgrims returning from Saudi Arabia and Iraq have led to the spread of the virus in central Turkey. Those returning were asked to self-isolate and later returnees were placed in quarantine facilities but the measures did not completely prevent transmission of the virus.

The movement of citizens inside the country, barred since last week, has allowed the virus to spread to every province.

Opposition politicians, including the mayors of two of the biggest cities, Ankara and Istanbul, have called for stricter measures, including a complete lockdown. Those cities have been among the hardest hit by the virus.

Selva Demiralp, a professor of economics at Istanbul’s Koc University, posted findings of a group of economists that the economic cost of containing the pandemic immediately, in April, would be less than if a lockdown was delayed and then enforced by necessity in May.

Health costs would increase with a delay, and economic fallout, especially for tourism, would worsen if prolonged, she said.

Mr. Erdogan has closed many public places, including bars, restaurants and mosques, but he has allowed industry, construction firms and public transportation to continue working.

In a speech to the nation on Monday night he said it was important for the country to continue producing and promised financial aid to families of workers.

“Our real fight will start after the pandemic,” he said. “That is the reason we emphasize keeping production going. Every factory of ours will go on producing. Our farmers will not leave an acre of land unplanted. Our service sector will keep both its domestic and foreign ties alive.”

“We don’t have any issues on diagnosis and treatment in our hospitals,” he added. “Thankfully, we’ve so far not encountered any significant issues in terms of health services, food and sanitation supplies and public safety.”

But Baris Yarkadas, a former opposition politician and journalist, said that testing across the country remained inadequate and may hide a far larger rate of infection. He complained that Turkey had delayed making critical decisions because of its concern about the effects on the economy.

“We knew it was spreading from China but we were so late in taking precautions we missed the opportunity,” he said in a telephone interview. “Turkey could have been like South Korea but we are like Italy and the United States.”

He blamed officials of Mr. Erdogan’s political party, the Justice and Development Party, for lack of vision.

“The biggest concern preventing them is economic worries,” he said. “They did not want to stop flights, or internal movement, and as there is no money to pay people to stay at home, millions have to go to work.”