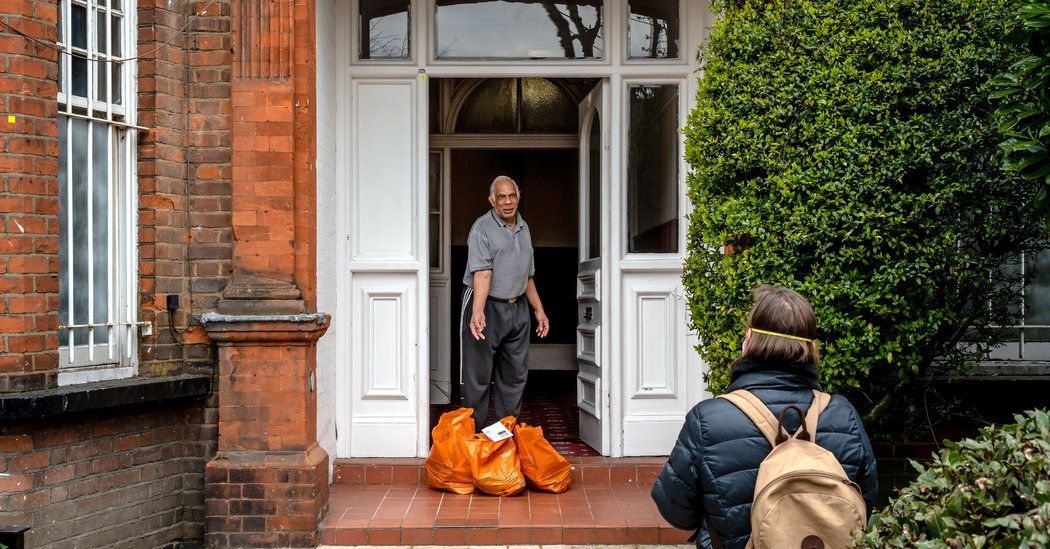 LONDON — A few weeks ago, Kate Sellars was organizing a James Bond getaway for her wealthy clients, in which they would have been flown by helicopter to Monte Carlo for a preview of the latest Bond movie, a glittering party with cast members and, for each guest, an Aston Martin gassed up and ready to drive.

Last week, Ms. Sellars lugged three bags of groceries from her local supermarket to the front step of Garth D’lima, a 73-year-old retired accountant who is marooned inside his house as the coronavirus sweeps London.

“It’s just heartbreaking not to be able to help him carry his groceries up the stairs,” she said, as she waved at Mr. D’lima from his front gate. “We can’t go into people’s houses because that would put them at risk.”

Ms. Sellars, whose luxury travel agency has been put on ice by the pandemic, has traded her glamorous day job for a grinding schedule of grocery shopping and picking up prescriptions for older people in Hampstead, her leafy, prosperous London neighborhood. She is a foot soldier in a vast volunteer army, marshaled in barely a week, to take care of Britain’s most vulnerable people during the country’s lockdown.

When the government appealed recently for 250,000 people to help the National Health Service, more than 750,000 signed up. It was forced to temporarily stop taking applicants so it could process the flood. In addition to the national program, hundreds of community-based aid groups have sprung up around the country, enrolling tens of thousands of volunteers, like Ms. Sellars.

All told, it is a stirring display of British national solidarity — a good-news story amid a grim tide of bulletins about overwhelmed hospitals, inadequate testing, a rising death toll, and a depleted political establishment, with Prime Minister Boris Johnson in intensive care and several of his aides still struggling after contracting the virus.

It is also a welcome balm, coming after three and a half years of bitter divisions over Brexit, a debate that cleaved the country socially, culturally and generationally. Coronavirus, many commentators have noted, is an equal-opportunity scourge: It strikes both “Leavers” and “Remainers.”

“During the Brexit debate, people used to say what we really need is a common enemy — and now we’ve got it,” said David Goodhart, a writer whose last book, “The Road to Somewhere,” explored the divide in British society between the rooted and the rootless. “Except this is an invisible enemy.”

The lockdown, Mr. Goodhart said, has exposed the “hidden indoor plumbing” of an affluent society: garbage collectors, delivery people, drugstore clerks and grocery store workers who keep food on the shelves. “It turns out that shelf stackers in supermarkets are absolutely vital,” he said.

Most poignantly, it has exposed the plight of seniors, who run by far the highest risk of succumbing to the pathogen. With that in mind, the government has urged people over the age of 70 to cut off all but the most necessary social contact for 12 weeks to reduce the risk of contracting the virus.

That deprives even the able-bodied of daily walks to their local shops. Confined to their houses, many have no idea how they are supposed to get food or other supplies. Lacking broadband connections, some have no face-to-face contact with friends or family members.

“The government has told 1.5 million people to stay inside, without any idea of who they are or how they’re supposed to do that,” said Connor Rochford, a medical doctor and former management consultant who started Hampstead Volunteer Corps with his partner, Sarah Dobbie, and another couple, Kate and Brendan Guy.

“They feel scared and they feel isolated,” he said. “Self-reliance is fine up to a point, but the ‘Keep Calm, Carry On’ ethic only goes so far.”

Since starting up on March 14, a week before Prime Minister Boris Johnson imposed the national lockdown, his group has amassed more than 600 volunteers. They are assigned to team leaders, like Ms. Sellars, who oversee areas of a few square blocks and parcel out the deliveries. So far, the group has helped 166 people, some with one-time requests, others with standing orders.

With little guidance from the government, the group has been forced to devise its own safety protocols. Volunteers wear face masks and sterilized gloves and keep a strict distance from the people they are helping. They are not allowed to enter their houses. The organizers have consulted crisis counselors for advice in dealing with people in particularly dire circumstances.

Money is a tricky issue: Some people are able to call ahead to stores and give their credit card information. In other cases, the volunteers front the expenses for groceries and get reimbursed when they drop them off.

For pensioners like Mr. D’lima, who pride themselves on their independence, it is not an easy adjustment. A few days earlier, he had lined up outside his overcrowded supermarket during a hailstorm. “I live alone so I always do my own shopping,” he said. “But my friend told me I shouldn’t go out.”

Some still refuse the helping hand. On her way to dropping off a prescription, Ms. Sellars stopped a quite elderly man in a raincoat on Hampstead’s High Street. He told her he was going to the post office, not realizing it was closed. When she offered to help him with his shopping, he stared at her incredulously.

As the man turned away, Ms. Sellars, who is 39, smiled sadly and said, “we call those people the Blitz generation.”

The heroism of the Blitz is much invoked these days. For some, the spirit of 1940 and 1941, when Britain was pounded nightly by German bombers, is evident in the stubborn self-reliance of people like the old man, determined to press on, however trying the circumstances. For others, it is apparent in the broader drama of Britons summoning the resilience that saw their parents and grandparents through that ordeal.

At 8 p.m. each Thursday, people gather in windows or on doorsteps to clap for the doctors and nurses of the National Health Service. The polite applause of the first week has given way to a clamorous din, as people bang pots and pans.

The Blitz, some point out, had its less heroic dimensions.

“It was not all Churchillian sticking together, but full of unpleasantness and crime,” said Simon Jenkins, author of “A Short History of London.” Still, he said, “myth is as important as reality.” Drawing a link to wartime Britain, Mr. Jenkins said, has been a valuable way for the government to try to shore up morale in this difficult period.

For some older people, the volunteer army is a throwback to a past they remember as more socially cohesive than today.

“It reminds me of my childhood in the Fifties,” said Jenni Towler, 69, who came to her door to pick up pain medication delivered by Ms. Sellars. “There was more interaction. We played together in the streets.”

“We’re all hunkered down and not allowed to be with each other,” she said. “But we don’t feel alone. I hope this will last and we will be more neighborly — not just send each other texts or emojis on our phones.”

For Ms. Sellars, volunteering has given meaning to a life unmoored by the pandemic. Her travel business, she is confident, will come back. But in the meantime, she said she had made friendships with people who otherwise would have been strangers on the sidewalk. Some leave her small gifts at the door. Getting to know them has given her a new perspective on the neighborhood where she was born.

“The big question is, what happens when this is over?” Ms. Sellars asked as she paused to gaze over the Victorian rooftops of Hampstead.

Then her cellphone rang, and she scribbled down an order to deliver a packet of soap to another urban castaway of the coronavirus.