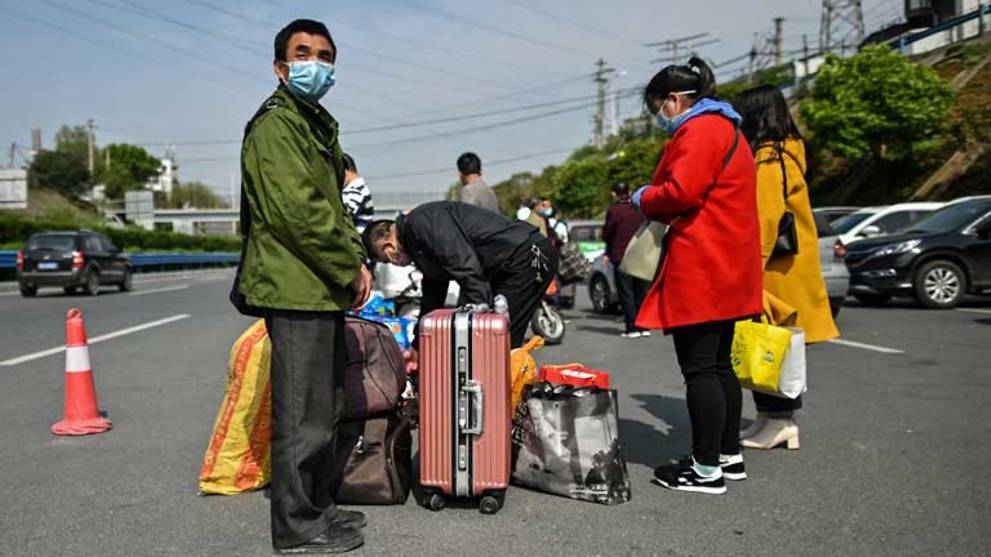 As the ban was lifted on schedule at midnight (1600 GMT Tuesday), many passengers expressed joy and relief as they filed into Wuhan’s Wuchang station, leaping at the chance to board overnight trains heading out of town.

Government estimates have said that as many as 55,000 people are expected to flow out on Wednesday by train from the city, which was placed under an unprecedented quarantine lockdown on Jan 23.

Some could barely contain their happiness.

The lockdown made Wuhan the first place in the world subjected to draconian containment steps now seen in many countries.

It was quickly followed by the rest of surrounding Hubei province, confining tens of millions of people to their homes and cutting the province off from the rest of the world as transport in and out was halted to prevent transmission of the virus.

Chinese media outlets hailed the removal of the travel ban, with headlines posted on their websites after midnight saying: “Wuhan, long time, no see.”

Hubei and the provincial capital Wuhan have suffered the majority of China’s officially claimed tally of more than 81,000 overall infections and more than 3,300 deaths.

An announcement blaring over the train station PA system said: “Wuhan deserves to be called the city of heroes. Wuhan people deserve to be called heroes.”

Despite the measures taken in Hubei, the pathogen spread across China and the world.

But Communist Party authorities – who are accused of a slow-footed response and an initial attempt to cover up the outbreak – have claimed recent success in bringing the virus to heel, though questions over the accuracy of its reported case numbers persist.

Hubei residents had been confined to their homes until about two weeks ago, when restrictions began to be eased, triggering a resumption of inbound travel from other parts of China.

Authorities, however, had waited until Wednesday to allow normal traffic out of Wuhan amid continued fears in the rest of the country that people from the city pose a risk.

Chinese disease-control officials said in January that the virus likely leapt from wildlife to humans at a Wuhan market that sold a wide range of wild animals for food.

Wuhan authorities said at the weekend that various restrictions on movement would remain in place to guard against a second wave of infections, arguing that “even greater vigilance is needed” now that the travel ban has been dismantled.

People from Wuhan also face hurdles getting out.

They must show proof that their area of origin has been declared safe from the virus, and many face the likelihood of two-week quarantines in their destination provinces.