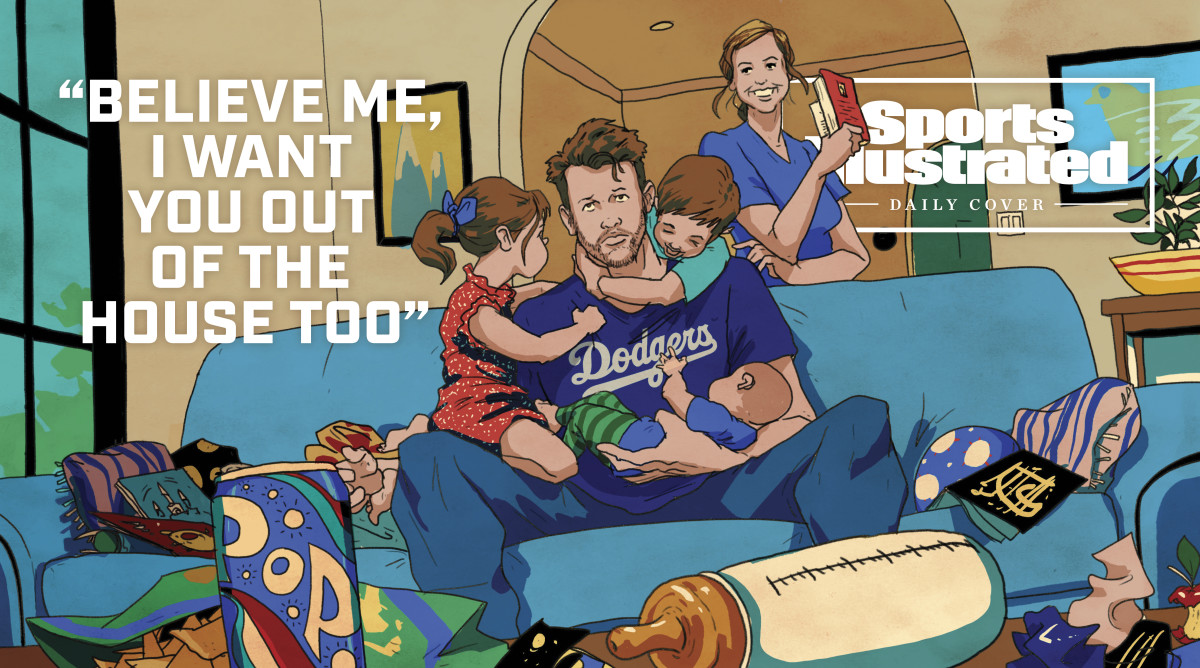 A strict quarantine is a good way to learn about your partner, and what Sara Hudson has learned is that her husband, Daniel, the Nationals’ closer, does not know how to use a Lysol wipe.

“You have to do it for a good 20 seconds for it to work!” Sara says. Daniel tends to give the contents of a grocery bag one pass and then put them away. In Sara’s view, he might as well just walk the food through a hospital’s isolation ward before serving it to their three daughters. She laughs and says, “I’m just like, ‘I’ll do it.’ ”

As the coronavirus pandemic has spread across the globe, and the MLB season has been suspended, players are home, waiting out this uneasy period like the rest of us. Unlike the record 6.6 million Americans who filed for unemployment during the week ending March 28, many of these players enjoy a financial cushion. They do not draw paychecks until the season begins, but the average major leaguer made $4.36 million last year, according to the Associated Press. Still, they are frightened and unsettled. They are struggling to establish some sense of normalcy during the least normal stage of their lives. Some of them are also driving their wives crazy.

It’s a small aggravation, nothing compared with the real devastation that the virus has caused. Ali Mahtook tries to find the humor in it. Her husband, Mikie, is a Phillies outfielder. He can’t go to work, but she still does, as a liquor representative for bars and restaurants in Baton Rouge. As many of those businesses have closed, her company has redeployed resources toward retail—meaning that while everyone around her is socially distancing, Ali is at local supermarkets and convenience stores, stocking shelves. When she gets home, she has emails to answer and data to enter.

Baseball players are used to having their schedule designed for them. So after Mikie spends the morning exercising, he turns to Ali.

They got married in January, so she usually hands him a stack of cards and tells him to work on the thank-you notes.

Players meticulously follow routine. So do their families. Now that’s all been upended.

Tori Murphy’s husband, Rockies first baseman Daniel, is eager to use this time to contribute to the household. How is that going?

“Daniel is a very good baseball player,” Tori says. He recently volunteered to go grocery shopping where they live in Jacksonville. Daniel returned with an air of pride and a three-pound brick of butter. “I was like, ‘Where did you find that?’” she says. “We have to hack at it with a straight-up butcher knife.” Daniel has since been given his unconditional release from grocery shopping. Tori filled his roster spot with Instacart.

Caitlin Hill can barely even discuss grocery shopping, because it reminds her of better times, before she and her husband, Twins lefty Rich, were trapped in their Milton, Mass., house with their eight-year-old son, Brice.

“I used to be able to say, ‘Go to Costco!’” Caitlin laments. “If [Rich] was on my nerves, I’d say, ‘O.K., go to Costco and get all these things I don’t need’ and that would entertain him. Now I can’t send him to Costco.” She pauses to reminisce. Usually she would ask him to buy staple items, but once he arrived, Rich would fall under the Costco spell. “He’d come home with a pallet of pineapples,” Caitlin says. “We had a watermelon once that we named, it was so big. We never cut it up. We called it Waldo.”

Instead of making, ahem, fruitless trips to the store, ballplayers are forced to reckon with an unfamiliar existence. Playing professional baseball is a privilege, but it is also an all-consuming daily grind. What happens when that disappears?

Whitney Blevins tries to be patient as her husband, 13-year veteran lefty Jerry, adjusts to life without baseball. (He was in Giants camp before spring training evaporated; San Francisco released him last week.) Of course, he knew she took care of their two boys, 23-month-old Ellis and five-month-old Ascher, but now he sees how challenging that really is. At 4 p.m. on the first full day after spring training had been canceled, he turned to her and said, “This is exhausting!”

After a few days of nonstop wrangling their six-year-old, four-year-old and two-year-old, Daniel Murphy told Tori, “I’d rather face Clayton Kershaw every day.”

Ellen Kershaw’s husband would surely rather face Murphy, too. The Dodgers ace famously clings to his baseball rituals, scheduling his day down to the second. Now he is in charge of after-school activities for his five-year-old Cali and three-year-old Charley while four-month-old Cooper naps. Clayton’s home gym was designed to match the one at Dodger Stadium, and he spends three hours there each morning.

Much to Ellen’s relief, he has not yet conscripted her as a training partner. Every day for a week, Taylor Poppen played long toss with her husband, Sean, who is trying to crack the Twins’ rotation. Brittany Panik rolls grounders for her husband, Blue Jays second baseman Joe. Caroline Means, who played goalie for three years in the NWSL, serves as catcher for her husband, Orioles All-Star lefty John. McKenzie Marcinek climbs on the back of her fiancé, Dodgers righty Walker Buehler, while he does squats.

The spouses also serve as therapists. Taylor and Sean Poppen are in Atlanta under a stay-at-home order. They live in a townhome without a yard or weights. They watch on Instagram as veteran players work out in their home gyms, and Taylor reassures Sean that his talent will prevail. In the meantime he does kettlebell swings. Their six-month-old, Brady, is the kettlebell. “He’s, like, 24 pounds,” says Taylor. “We have a pork chop.”

A few days ago, Sara Hudson felt Daniel’s mood dipping. There are plenty of people in Phoenix who would be happy to play catch with a reigning World Series champion, but he’s afraid to share a ball. So he stands alone in a grassy area near their house, hurling baseballs through the air. Then he walks to where they have landed and throws them back. Sara cued up Game 7 of the World Series. “Hold onto that feeling a little while longer,” she told him.

Most of the complaints come with a wink and a laugh; they all know how fortunate they are. Kourtney Turner says, “I think you’d be hard-pressed to find someone who feels bad for a baseball couple right now.” She and her husband, Dodgers All-Star third baseman Justin, spend most days on the phone for their Justin Turner Foundation. Once the schools closed, many children lost access to free and reduced-price meals; the JTF has paid L.A. restaurants, also under stress right now, to cater meals for pickup.

The pain of the pandemic has directly touched baseball families, too. Janelise Maldonado and her husband, Astros catcher Martín, live in Puerto Rico in the offseason but decided to ride out the quarantine in Houston for fear they would be unable to leave the island when the season started. This has left them 2,000 miles from the people they love most. The Meanses live just a few minutes from John’s parents, but his father has pancreatic cancer, so they cannot be near him, even if the social-distancing regulations ease. They all express concern for the families of minor leaguers, who have to make do on a few hundred dollars a month.

Even for the lucky ones, there can be an emotional cost. They are unable to share milestones with loved ones. Buehler had intended to propose to Marcinek in Palm Springs, Calif., on the way from spring training to Opening Day. Instead they drove home to Kentucky. He got down on one knee in the bedroom closet. They celebrated with friends and family over FaceTime.

Mostly, baseball couples try to maintain some sense of normalcy—and try not to strangle one another. “The wine’s open by 5,” says Sara Hudson. Taylor and Sean Poppen work on their separate hobbies (calligraphy for her, coding for him) to give each other a break. After especially long days, Tori and Daniel Murphy fist-bump and watch TV in separate rooms.

Eireann Dolan and her husband, Nationals reliever Sean Doolittle, have no such luxury. They booked a 300-square-foot room in a Homewood Suites for spring training and decided to stay there rather than go home to Chicago. Then the baseball facility was converted into a COVID-19 testing facility. Now they walk their two dogs so often that the poor creatures all but cower when the leashes come out. Sean recently had to carry their 50-pound mixed breed half a mile home after she gave up. They have watched the entire Martin Scorsese catalog and read what feels like every book ever written. Eireann has cut Sean’s hair. They have had enough.

Still, there are small moments of beauty, especially for the fathers. The travel inherent in their jobs means that the players can sometimes feel removed from the grind of parenting; if you see your kids for only a few hours a day, a few days a week, do you want to spend that time disciplining them? But now they are there for everything. Rich Hill has begun to enforce bedtime. Heather Zimmerman is seven months pregnant; her husband, Nationals first baseman Ryan, has begun to learn what to make their two daughters for lunch. And two weeks ago, Ascher Blevins learned to roll over. On Tuesday, he began crawling. The Giants were supposed to be on a season-opening road trip right now. Jerry might have missed all that.

Dolan does not see how MLB can possibly return in 2020. There are too many people, too many possible chances for infection. “Short of imprisoning them in a stadium—” she starts. A commotion in the background interrupts her. Doolittle has been listening in—it’s hard not to, from a few feet away—and has something to add. “Tell her we want to play!” he insists.