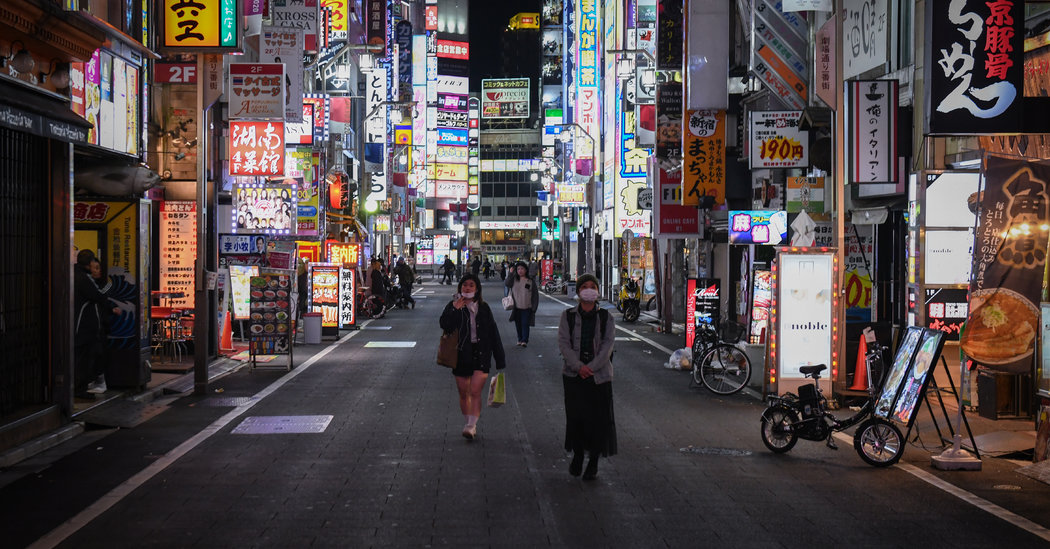 TOKYO — For months, Japan has confounded the world by reporting a relatively low rate of coronavirus infections without imposing the kind of stringent measures used by other nations.

Now, as its largest cities experience a worrisome rise in cases, medical experts are wondering whether a state of emergency declared on Tuesday has come just in time to avoid calamity, or is too little, too late.

Prime Minister Shinzo Abe, in announcing that the declaration would apply to Japan’s biggest population centers for the next month, painted an optimistic picture. By asking citizens to significantly reduce human-to-human contact, he said, “the expansion of infections can be turned to a decline in two weeks.”

But some experts said the state of emergency amounted to a tacit admission that the approach the country had stood by for months was no longer working, as Japan reached 3,906 confirmed cases on Tuesday, exactly double the number a week earlier.

“Japan has been screwing up,” said Kenji Shibuya, director of the Institute for Population Health at King’s College London. The confirmed cases, he said, are “just the tip of the iceberg,” adding that a surge of patients could cause Tokyo’s health care system to collapse.

Although Japan is now taking its virus fight a step further, the emergency move has limits of its own. The declaration will depend largely on voluntary compliance, and Mr. Abe emphasized that it was not a lockdown, and that public transit would continue. Prefectural governors can only request that people work from home and avoid going out.

A day earlier, Mr. Abe announced that the country would increase its testing capacity for the virus to 20,000 a day. So far, however, Japan has rarely conducted even half of the 7,500 tests it now has the ability to perform each day.

Experts who have been advising the government are divided over whether Japan — which has still not reported the sort of explosive rise in cases seen in places like Italy and the United States — is at a crisis point.

In a statement posted on Twitter over the weekend, Hitoshi Oshitani, a professor of virology at Tohoku University in northeastern Japan and a government adviser, wrote that “the risk of infection is very low if people continue ordinary living, unless they go to hot spots.” Those places are defined by the government as the “3 Cs” — closed spaces where crowds meet in close proximity.

In Tokyo, by most measures the world’s largest city, cases have doubled in the last five days to more than 1,000. Now, some government advisers are warning of a perilous new phase.

“It’s possible that Tokyo has entered a period of explosive and exponential growth,” Hiroshi Nishiura, an epidemiology professor at Hokkaido University in northern Japan and a member of an expert panel advising Japan’s government, told the newspaper Nikkei last week. “It’s necessary to issue a stronger restriction on going out than” telling people to exercise self-restraint, Professor Nishiura said.

However, a law enacted last month under which Mr. Abe declared the state of emergency does not give him the power to issue stay-at-home orders or force businesses to close, as other hard-hit countries have done. Mr. Abe can ask prefectural governors to shut schools and order building owners to contribute facilities for medical use, but the authorities cannot take punitive action against anyone who disregards suggestions to stay inside or to work remotely.

Mikiko Eto, principal of the Hatto Nursery School in Tokyo, said she hoped that parents would comply with the soft directives. Until last week, most of the 150 children who regularly attend were still showing up every morning.

Despite daily temperature checks and frequent disinfection of toys and tables, staff members worry about contracting the coronavirus, Ms. Eto said. “Many parents come and go,” she noted, “which makes us feel stressed and nervous.”

On Monday, with confirmed cases in Tokyo spiking, Ms. Eto sent an email to parents asking them to keep their children at home. About a third of the children did not come that day, she said. The prime minister said on Tuesday that day care centers would not be forced to close because some parents might still need care for their children.

The state of emergency covers seven prefectures with about 56.1 million people; Japan’s total population is just under 127 million. Across Tokyo and other large cities, including Kobe, Osaka and Yokohama, citizens and businesses will have to decide how to respond to the declaration.

Health officials in Japan, until now, have reassured the public that they have kept the virus in check by closing schools, urging the cancellation of large sports and cultural events, and warning people to avoid crowds in enclosed, unventilated spaces, such as in karaoke bars or nightclubs.

In contrast to other countries, such as Germany and South Korea, that have had some success in controlling the virus, Japan has refrained from testing widely.

Until last week, public health officials argued that rules requiring the hospitalization of everyone who tested positive risked overwhelming the health care system with mildly sick patients. The government has since changed that rule, and Mr. Abe said that it had secured 10,000 hotel rooms in Tokyo and 3,000 in the Kansai region, which includes Osaka, where patients with mild symptoms could recover. Up to 800 patients can also stay in an Olympic building in Tokyo.

In and around the capital, clusters of infections have begun to emerge. There have been outbreaks linked to several Tokyo hospitals, including a university center where 18 residents were infected after attending a dinner party, and another in eastern Tokyo where at least 146 have been infected and 16 have died.

For the last two weekends in a row, Tokyo’s governor, Yuriko Koike, has asked residents to stay inside for all but the most essential needs. She has encouraged people to telecommute and to avoid going out in the evenings during the week.

Crowds have thinned in popular nightlife spots and shopping districts, but commuters have been more resistant. According to a survey by the Ministry of Land, Infrastructure, Transport and Tourism, just over one in eight respondents said they had worked from home as a preventive measure against the coronavirus.

On Tuesday morning, before the emergency declaration went into effect, throngs of commuters wearing masks crowded platforms at the Shinjuku and Shibuya train stations, two of Tokyo’s largest.

With Japan still recording a relatively low number of deaths — fewer than 100 so far — some say they do not see a need to avoid all contact with others.

If packed trains were a problem, said Takuji Okubo, North Asia director of the Economist Corporate Network, “I think we would have seen a nightmare story in Japan” already.

Mr. Okubo, who said he was more concerned about the potential damage to the economy — Mr. Abe also announced a stimulus package worth nearly $1 trillion — added that he saw little risk of infection from shopping in department stores or eating in restaurants.

Some experts express worry that the Japanese government has focused too narrowly in its warnings about where infections can spread. Many of the newest cases cannot be traced to a specific source of transmission, which means public health officials do not know what conditions led to those infections.

With undetected cases multiplying, there is also a concern among medical experts that Japan’s hospital capacity could quickly be overwhelmed. According to the Japanese Society of Intensive Care Medicine, Japan has five intensive care beds per 100,000 people, compared with close to 30 in Germany and 12 in Italy.

“For most countries, it’s not ‘are they going to dodge the bullet?,’” said Dr. Keiji Fukuda, director of the School of Public Health at the University of Hong Kong. “It’s just ‘when is it going to come?’ This is true for Japan, too.”

And while the Japanese are more likely to wear masks in public, the recent spike in Tokyo suggests that the face coverings cannot provide total protection.

“Even in a place where lots of people wear masks,” said Dr. Peter Rabinowitz, co-director of the University of Washington MetaCenter for Pandemic Preparedness and Global Health Security, “that is probably not enough by itself if there is not social distancing on top of the masks.”

As Japan’s outlook has deteriorated, some have adjusted. Masataka Morita, general manager of the public relations department at Hitachi, the electronics giant, said he had juggled Skype meetings from home while helping to care for his three sons.

He can no longer visit his father, who has been in the hospital for a noncoronavirus illness for the last four months. When he took one of his sons to visit his mother last weekend, they decided to forgo their usual trip to a sushi restaurant.

Last week, he noted, he visited his office for about two hours. With the state of emergency though, he said he would refrain from doing so again.