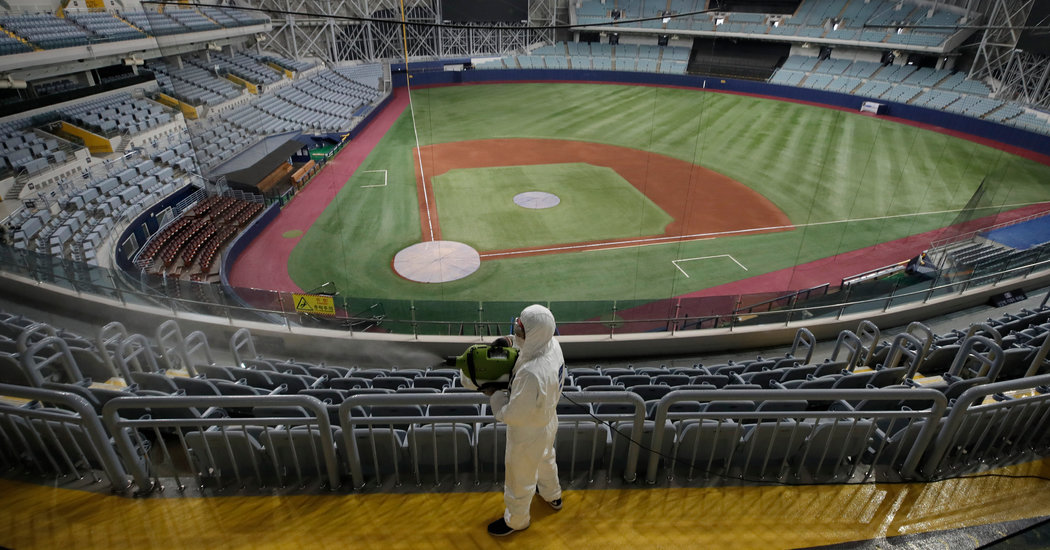 “I can’t imagine what it’s like for guys in the States. They have no idea right now. What exactly do you do? Do you take time completely off? Do you try to stay going? It’s such a wild time.”

If the season were to begin with games played without spectators, it would greatly stifle the atmosphere in a league known for sustained chanting and singing by fans, no matter the score. But, Brigham said, the league would still be an appealing alternative for American fans craving baseball.

“I understand there’s a lot going on and it’s terrible,” said Brigham, who is starting his fourth season in the league. “But the K.B.O. has wanted to boost their exposure worldwide, and if they can do it in a safe manner, there’s a real opportunity for the Korean players to have that worldwide exposure, so people can understand there are some incredibly talented people in this league.”

Some U.S. major leaguers have gone to South Korea and returned with a higher profile, like first baseman Eric Thames of the Washington Nationals and pitcher Josh Lindblom, who signed a three-year, $9.125 million contract with the Milwaukee Brewers in December after winning the K.B.O.’s Most Valuable Player Award.

But the league also has budding South Korean stars — Brigham mentioned teammates like shortstop Ha-Seong Kim and center fielder Jung-hoo Lee — who could be major leaguers someday. In a season unlike any other, they could emerge as more than an occasional Twitter curiosity.

“The foreign guys, we’ve had our opportunity, we’ve all played in the big leagues for the most part,” Brigham said. “I’m over here providing for my family, and I love the opportunity. It’s been incredible.”

He added: “But for the Korean guys, if they can get American fans to really see them for more than just the occasional bat flip that comes across on Pitching Ninja,” he added, referring to a popular baseball Twitter account, “it could be really good for these guys.”