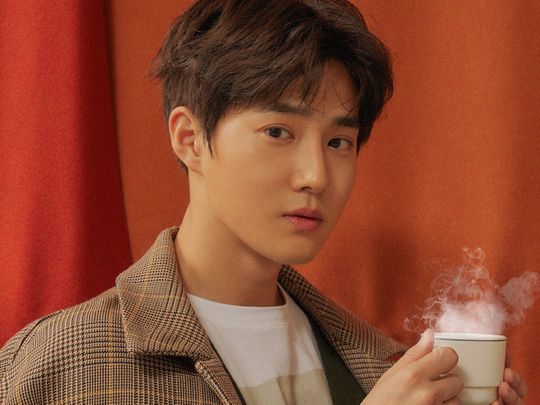 Exo’s Suho painted a personal self-portrait with his new sentimental music and managed to make a chart-topping solo debut with flying colours in the UAE last week.

The leader of the prominent K-Pop boy band released his first ever solo mini-album ‘Self-Portrait’, showcasing his own musical style and identity and adding his own personal stories as Kim Jun-myeon (his given name) — not heard in any of the group’s releases.

The multifaceted entertainer lyrically contributed to the toned-down musical numbers. Fronted by modern-rock ‘Let’s Love’ that was titled after the K-Pop band’s team slogan, the six-track, self-reflective album contains tracks: ‘O2’, ‘Starry Night’, ‘For You Now’ ft. Younha, ‘Self-Portrait’ and ‘Made In You’.

The concept of the album was inspired by Vincent Van Gogh’s famous ‘Self-Portrait’, which is visually seen on the album’s illustrative cover. And it was definitely a painted success and a favourite among local and global fans as well as in his homeland.

‘Let’s Love’ and ‘Self-Portrait’ topped the iTunes Top Songs chart and Top Albums chart in the UAE, respectively. The mini-album was a hit in 49 other countries such as Saudi Arabia, Indonesia, Bahrain, France, the Philippines, India, Turkey, Egypt, Jordan and Oman.

Adding to this, the official music video achieved an impressive feat on YouTube when it debuted as the second trending video in the country on the day of its release.

Suho is widely known as a member and leader of sensational K-Pop group Exo since 2012. ‘Self-Portrait’ marks the artist’s first time debuting as a soloist and he is the fourth Exo member — after Baekhyun, Chen and Lay — to release solo music outside his group activities. He has also been active in other sides of the South Korean entertainment industry, from acting on TV dramas and films to performing on the musical stage.