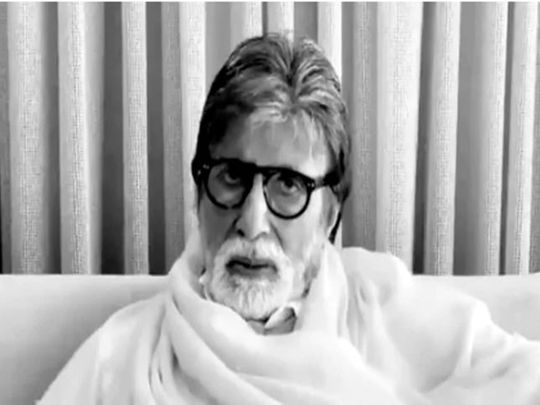 In a star-studded video that would put top director-producer Karan Johar — known for his stellar casting coups in films — to shame, Amitabh Bachchan spearheaded a short film to underline the importance of staying home during the coronavirus outbreak. In less than five minutes, Bachchan and his starry gang proved that a lot can be achieved by staying indoors, a point that is being drilled to flatten the curve of the pandemic.

The short video is flooded with big names from the world of Indian entertainment including Rajinikanth, Priyanka Chopra Jonas, Ranbir Kapoor, Alia Bhatt, Mohanlal, Mammootty and Chiranjeevi, Prosenjit Chatterjee, Shiva Rajkumar and Diljit Dosanjh as they all embark on a hunt to find Bachchan’s sunglasses.

The black-and-white video opens with Bachchan playing himself sitting on a couch, lamenting about not finding his treasured pair of sunglasses. Diljit Dosanjh pops up on the screen promising to find it. He wakes up Ranbir Kapoor who is fast asleep on the bed, who then springs out of bed to ask Malayalam superstar Mammootty whether he has seen Bachchan’s glasses. Mammootty then breaks into Malayalam about how Bachchan needs to upgrade his style quotient when it comes to sunglasses. The next shot, shown seamlessly, shows Rajinikanth doing the trademark sunnies flip. Maharashtra’s Sonalee Kulkarni also makes a cameo.

The climax? Bachchan reveals that the scenes featuring each star was shot individually at their own homes, without stepping out during the coronavirus lockdown. The moral of this star-splattered video is simple: stay home, stay safe.

The video also ends with how the stars are helping industry workers tackle the economic downturn caused due to the outbreak.