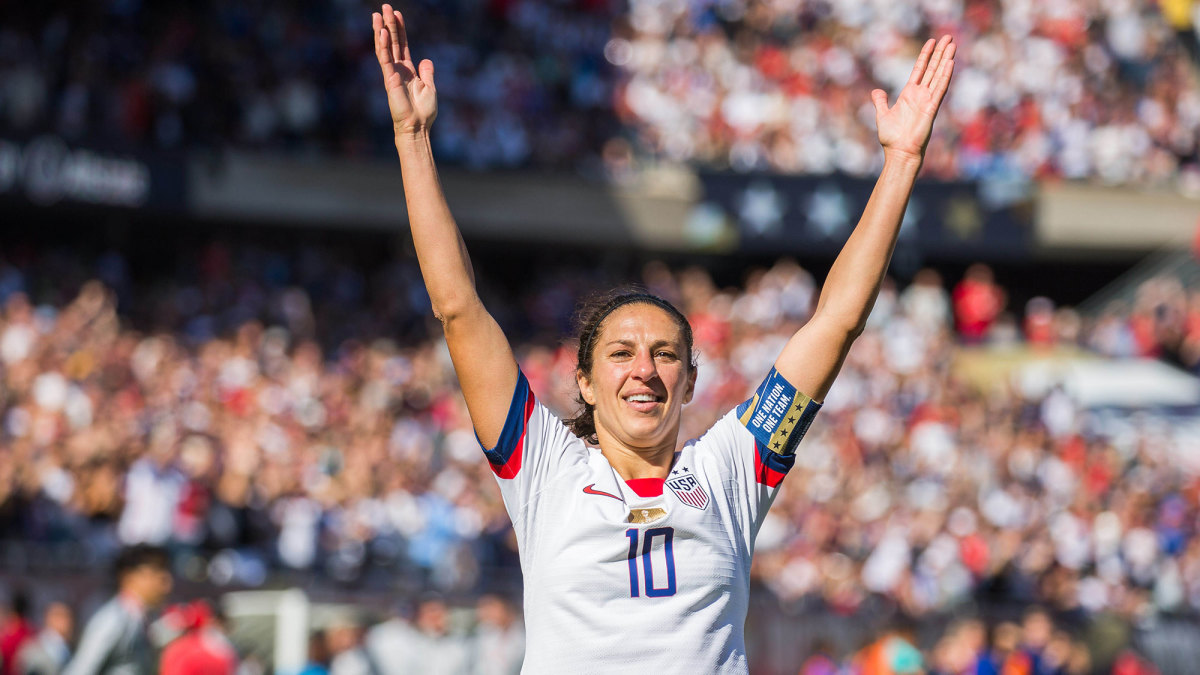 The exchange took place at the end of December. U.S. women’s national team star Carli Lloyd was giving a deposition in the USWNT players gender-discrimination case against U.S. Soccer, and a federation lawyer asked her a loaded question.

“Do you think that the team could be competitive against the senior men’s national team?”

“I’m not sure,” Lloyd replied. “Shall we fight it out to see who wins and then we get paid more?”

The exchange went public in filings released on February 20, and Lloyd’s response immediately became a catchphrase for supporters of the USWNT. What’s more, the lawyer’s question was a bellwether of the legal strategy that U.S. Soccer would try to use. That became even more clear in March, when U.S. Soccer said in new filings that U.S. women’s players had inherently less skill, ability and responsibility than U.S. men’s players.

The backlash to that strategy has been significant. Federation sponsors took issue. U.S. Soccer president Carlos Cordeiro resigned. And the federation’s new leaders—including president Cindy Parlow Cone, a former USWNT player—withdrew that legal strategy and said they wanted to settle the lawsuit before it goes to trial in May.

But what did Lloyd think about that fateful exchange with the U.S. Soccer lawyer? She spoke about it during an interview on the new Planet Fútbol Podcast.

“The whole argument of ‘not as skilled as the men,’ it almost seemed like it had to be black or white,” Lloyd said. “I don’t want someone to ever come into a room and tell me that I have less skills than men, because I think that my skills are a lot more efficient and a lot better than a lot of men’s players.

“But I don’t have the physical attributes and the speed and the strength that they’re born with,” she continued. “None of us women do. There are some incredibly skillful women that play soccer, and it was just disappointing to hear over and over again the argument of us not being as skilled as the men. So I had to find some funny remarks just to kind of keep the whole mood light. And that was just one of them that came out and went public.”

Truth be told, though, Lloyd would prefer for the USWNT to be on much better terms with the USMNT, and so she’s proposing an idea: Side-by-side training camps in which the players would get to know each other better and even train with each other at times. It’s not like it has never happened before. Claudio and Danielle Reyna met in 1994 when the USMNT and WNT were staying at the same hotel in southern California. And while we don’t need to necessarily attempt to create situations that will produce players like their son, 17-year-old emerging star Gio Reyna, just having the two national teams together would be cool.

“As a whole, we need the culture to change,” Lloyd said. “We need everybody to feel united. I wish that we integrated more with the men’s team. I wish that we had camps side by side. Maybe for the January camps we could all go to the same place and just have a bit more interaction. Because as long as I’ve played on the national team, that’s never really happened. The slogan ‘One Nation, One Team,’ I think we really need to kind of bridge that.”

“I’m not saying we need integrated practices, but I think it would be fun to just do some rondos with the guys, intermingle and have some of us women in there with the men. It would just be fun. And then when you’re watching their games and you get to know more of these players, you pull for them more and you kind of have a better understanding of them from a relationship standpoint. So that’s my idea. And maybe that’ll happen one day.”

Lloyd isn’t the first USWNT player to say she’d like more overlap with the men’s team—and her idea might start a process that could lead eventually to the MNT and WNT joining forces to collectively bargain with U.S. Soccer. That would certainly be one way for something close to equality to be reached when it comes to pay from U.S. Soccer.

In some ways, the global shutdown during the coronavirus has been a huge change for Lloyd. She’s cooking a lot at home for the first time, she said, and has enjoyed executing new recipes with her husband, Brian Hollins, in the kitchen and in their grill and smoker. But in other ways this stretch has been Classic Carli, allowing her to take her usual punishing workouts and make them even harder.

Lloyd has continued her work with James Galanis, her personal coach in the Philadelphia suburbs of New Jersey, who recently opened his own facility.

“I’m actually probably getting better training now than ever in my career,” Lloyd said, “because I’ve got nothing else to focus on. I’ve got no appearances to worry about, nowhere to fly, no schedule. I have a track nearby that I use, and then I have a field as well. These next couple months or however long it’s going to be is going to be really huge for me. So I’m taking every ounce of opportunity out of it I can.”

That fitness will matter. Lloyd turns 38 in July, and she has a vision now of how she would like her playing career to end: With her third Olympic gold medal at the 2021 Olympics in Tokyo.

The decision to postpone the Olympics for another year didn’t come as a surprise, obviously.

“While we all would love to have competed this summer, I think it’s in the best interest of everybody—athletes, healthcare workers, people around the world, fans—to postpone it,” Lloyd said. “Because nobody’s in the right frame of mind right now. Nobody’s in their normal training schedule. So for me, again, find the silver lining in the most challenging situations. I get another year to prepare, our team gets another year to prepare. The country and the world can hopefully rebound from what’s going on right now.

“I’ve had no date per se, in mind of officially retiring,” Lloyd continued. “I think in another year it probably will be the right time. Hopefully I continue to perform and make the Tokyo roster, and I would want nothing more than to win a gold medal with my teammates and fly off into the sunset.”

Perhaps that sunset will include a tryout as a placekicker for an NFL team. A few months ago, in what now seems a lifetime away, Lloyd banged home some field goals from more than 50 yards out and drew interest from some NFL teams. She says two different teams wanted to bring her in, but the timing didn’t work out.

“First and foremost I’m a soccer player, and that’s my goal and my motivation to be the best that I possibly can be,” Lloyd said. “Right now my focus is obviously on another year of [soccer] preparation. Then we’ll see what happens.”

Lloyd’s biggest challenge in that year will be to convince U.S. coach Vlatko Andonovski that it will still be worth it to take a 39-year-old Lloyd to Japan on a small 18-player roster. But she thinks she can do it, and she likes what Andonovski has done for the team since taking over in late 2019.

“He’s done a great job of coming in and wanting to make every player individually better, and then the team collectively better,” Lloyd said. “So I think that’s been something that’s been really fantastic and different from him as opposed to other coaches that I’ve had on the national team. The individual development piece is big. He’s very detail-oriented and we have a lot of meetings, a lot of tactical meetings.

“He’s getting us to play some really, really good soccer. The biggest thing, which now we’re going to obviously have a lot more time to do is, is the final-third piece. That’s probably the hardest piece within any team is that last and final phase. But to be sophisticated with it, to be tricky, to be able if one gate’s closed and teams are bunkering, we have to find another way to be able to be successful.”

That’s the task ahead. Even in isolation, Carli Lloyd is already on it.