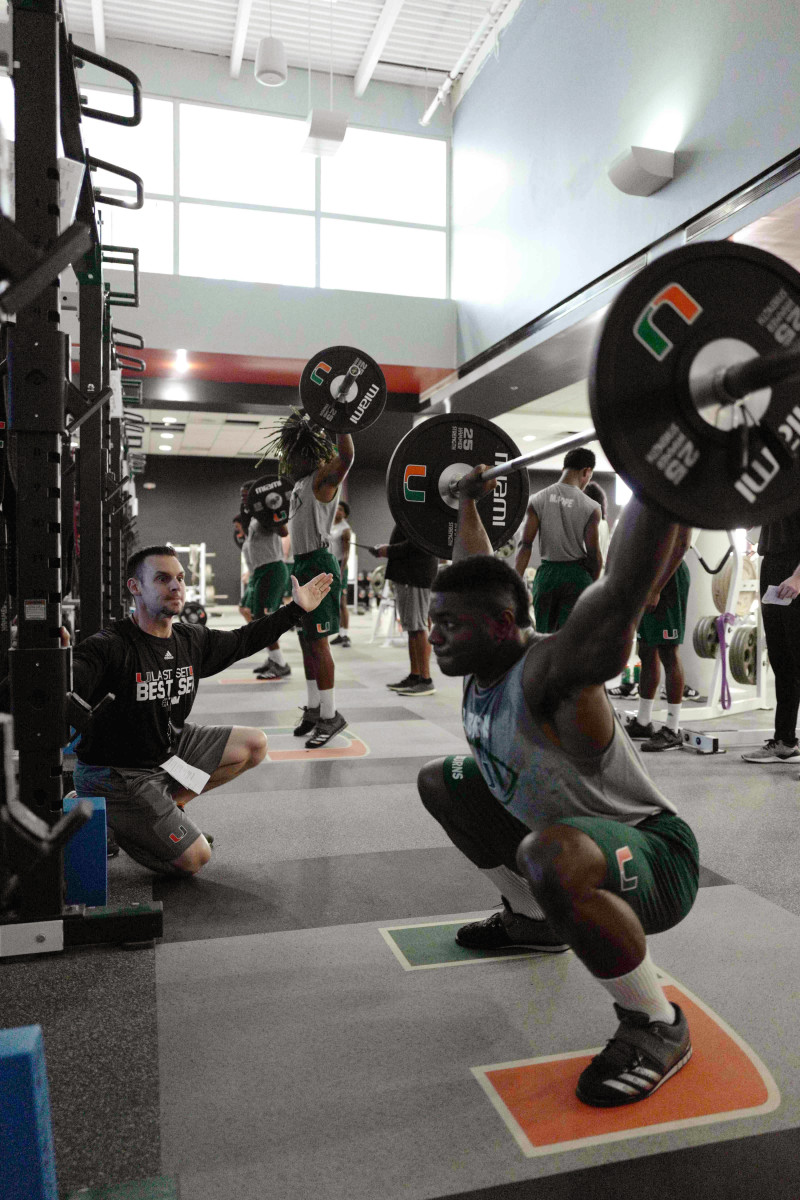 While LeBron James has been able to self-isolate in a lavish home gym stocked with dumbbells and weight machines, many of his peers, some of whom live in perhaps less stately abodes, have scrambled to make do. Serge Ibaka, for instance, has posted on Twitter about his makeshift quarantine setup: an exercise bike, resistance bands and some small hurdles. With fitness facilities and campus weight rooms shuttered in much of the country, Ibaka’s spread is robust compared to what, say, NFL players low on the depth chart and most college and high school athletes will have access to in the coming weeks, perhaps months.

After all, not everybody can afford to drop $2,245 on a Peloton bike, a la Rory McIlroy and Usain Bolt, who are dedicated enthusiasts. Consider the New Jersey middle school softball player who posted a video doing kettlebell swings with a gallon of fruit juice in her kitchen, or the Dakota State defensive end who filled an equipment bag with 190 pounds of stuff and used it for unwieldy deadlifts, or the legions of others doing pushups in their driveways.

The inconvenience of derailed training regimens, of course, is insignificant when held against a cratering economy and the hundreds of thousands across the world suffering from COVID-19, but the virus and its fallout are bound to take a toll on nearly every athlete’s body, infected or not, by the time sports return.

From the infection itself to the potential for heat stroke and ACL tears begotten by diminished conditioning and compressed timeframes—especially if players are rushed back quickly—the virus’s impact could be vast by the time stadium gates finally swing open.

“Everybody wants to see the games again. Everybody wants to turn on their television and have live sports to watch, but we have to get there in a way that prioritizes health and safety,” says Tory Lindley, the Director of Athletic Training Services at Northwestern and the National Athletic Trainers’ Association president. “This is an unprecedented reset.”

It is also an unprecedented test. Will we pass?

What could the virus itself do to an athlete’s body? Already, Rudy Gobert, Donovan Mitchell, Kevin Durant, Marcus Smart, a pair of Los Angeles Lakers, and many, many more athletes of all levels have contracted the virus. The effects of the infection, which attacks the air sacs in the lungs responsible for transmitting oxygen to the bloodstream, vary across a few strata. Young, fit athletes tend not to fall in the categories at greatest risk (though some young, otherwise healthy people who have contracted COVID-19 have died).

Early data suggest about 80% of the infected population is asymptomatic or experiencing “mild” symptoms like a fever, persistent dry cough or shortness of breath. According to the CDC, about 14% of those aged 20-44 reach the moderate stage, which requires hospitalization and oxygen but not a ventilator. Patients affected most severely develop acute respiratory distress syndrome (ARDS), in which survival depends on access to a ventilator, typically in an intensive care unit. According to the CDC, only 2% of people aged 20-44 require treatment in an ICU, and .1% die.

What might the consequences to their athletic careers be for that sliver of the young population placed on ventilators? A study of 12 hospitalized COVID-19 patients in Hong Kong found that three of them displayed a 20-30% diminishment of lung capacity in the near term. That is an exceedingly small sample, though, and since the virus is so new, the horizon beyond a few weeks is unknown. Dr. John Balmes, a professor of medicine at the University of California, San Francisco who specializes in pulmonary and critical care, warns its far too early in the virus’s trajectory to determine whether there’s risk for lasting structural damage and reduced lung function. He adds, though, that comparable afflictions typically do not have lasting impacts on lung capacity or structure.

That being said, any athletes who are placed on ventilators may require physical therapy to rebuild muscles that support the lungs, which can atrophy as the machine breathes for them. And athletes dealing with asthma may also have additional cause for concern: Balmes points to numerous studies that have shown viral respiratory infections like COVID-19 can worsen asthma’s effects on a persistent basis, heightening the body’s inflammatory response even after the virus has been cleared.

A 2008 study of Division I athletes found roughly 17% had some degree of asthma, and a recent paper examining the prevalence of asthma in athletes notes that the condition, which causes inflammation in airways that can inhibit the lungs’ ability to carry oxygen to the body, is widely underdiagnosed. The virus could make a subset of athletes’ typical asthma symptoms—coughing attacks, wheezing, chest tightness—more severe in the long-term, particularly among those who compete in cold weather.

For most athletes, though, the biggest risks to performance will have little to do with the virus itself. Lindley, of Northwestern, estimates that about 40% of players on most rosters are coping with an injury at any given time. Now, athletic trainers accustomed to daily interactions with those in their care are forced to hold videoconferences with athletes to, say, demonstrate complex rehab exercises.

Some Division I schools have the means to send modest equipment like resistance bands home with their athletes, but many others have been forced to improvise by asking athletes to find items in their house—perhaps a gas canister or paint bucket—they can use to add some weight to vital rehabilitation workouts. Meanwhile, surgeries have been pushed back and access to local outpatient clinics blocked. “We’re just taking it one day at a time with our athletes, keeping in contact, making sure that they have resources,” says Scott Anderson, the University of Oklahoma’s head athletic trainer, who has been separated from athletes in his care since March 11. “It’s a little bit of a challenge, but there’s always a way.”

Division I athletes and most pros typically aren’t away from their athletic trainers or strength and conditioning coaches for more than two-to-three weeks at a time over the course of a year, but the COVID-mandated separation could wear on for months. During athletes’ time away from rigorous training, says Dr. Michael Tevald, an Arcadia University associate professor of physical therapy, their muscular and cardiovascular systems are likely to diminish. In the near term, resting heart rates could rise and their heart’s ability to pump oxygen through the bloodstream could abate.

Sports medicine personnel say that giving athletes adequate time to gradually rebuild from these deficits, particularly for football players and those in other sports who are poised to return in hot summer months, will be essential. After weeks—maybe months—away from typical training regimens, many athletes will return to their campuses or teams much further removed from peak muscular or cardiovascular shape than they might after a typical break or offseason. “We all have to collectively be patient,” Lindley says. “We are going to have to allow for a long runway back to full practices—a very long runway.”

Anderson has extensively studied conditioning deaths among college athletes, particularly football players, and the prevalence of conditions like rhabdomyolysis, in which rapid muscle breakdown can trigger kidney damage and lead to hospitalization in the wake of overexertion. (More than 40 college athletes have been stricken with the condition over the past decade.) Though he has spent years sounding alarm bells about the entirely preventable heatstroke deaths that occur in college football seemingly every summer, he notes that if coaches and medical personnel adhere to recently published best practices targeting the prevention of those sort of incidents, that there shouldn’t be a spike in dangerous incidents when athletes resume training—but that’s only if everyone adheres to those guidelines.

“There are still people out there who train by tradition, for lack of a better term. They do what they did when they were being trained, and so there still is a penchant for some excess,” Anderson says. “That really puts people at risk.”

Beyond potential cardiovascular issues, athletes’ muscles and ligaments will need adequate time to recalibrate to their sports’ demands. After the 2011 NFL lockout that kept players away from team medical personnel and strength and conditioning coaches for four months, Achilles tendon tears leapt from an average of eight per season to 12 in training camp and the preseason alone, according to a study done that year. Similarly, a 2012 report found that NBA injury rates jumped after the league’s 2011 lockout, including a rash of ACL tears among stars like Derrick Rose, Ricky Rubio and Baron Davis. Nine players tore ACLs in the two years after the lockout, a figure that dropped to an average of a little more than two per year in subsequent seasons.

Despite the obvious pitfalls of rushing athletes back to competition, the financial, cultural (and, in an election year, perhaps even political) pressures to ensure stadiums are full on fall Saturdays and Sundays will be immense. Already, reports suggest that the NFL wants to come back on a normal regular season schedule and that the NBA hopes to finish its season no later than Labor Day, which could mean players will be thrust back into hyper-strenuous playoff competition almost immediately after a long layoff. And administrators in college athletics departments, many of which are propped up by football television contracts and ticket sales, are publicly discussing the specter of lost games, lost revenue, lost jobs, if players can’t take the field in the fall.

Then there’s the strain some pro athletes may feel to meet clauses in their contracts tied to conditioning (NFL teams, for instance, can fine players for being overweight—up to $730 per pound no more than twice per week). Or the urge younger athletes may feel to chase life-altering rewards, like a high-schooler pursuing a college scholarship or a college athlete working toward a shot at being drafted. With stakes that high, many athletes may not be inclined to throttle down when their bodies demand it.

After months in relative isolation, a pent-up populace will soon clamor for the hasty return of its communal escape. Sports so often offer a chance to heal after times of crisis, but if decision-makers don’t heed medical experts’ calls to take a deliberate approach, it will be athletes’ bodies in need of healing.