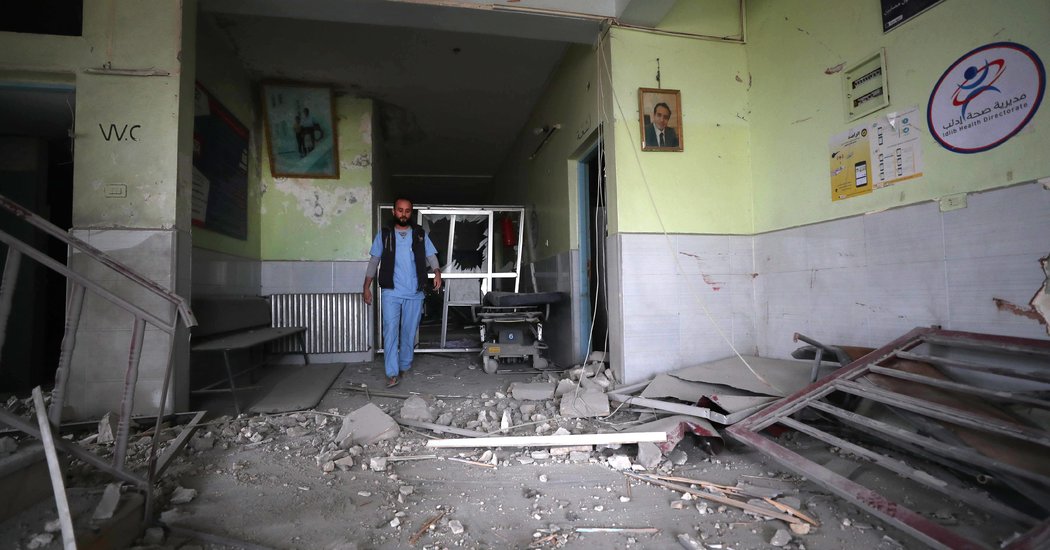 A United Nations investigation into attacks on humanitarian sites in Syria concluded in a report released on Monday that the Syrian government or its allies had committed most of them — but failed to name Russia, the most important of those allies, as a perpetrator.

The board of inquiry looked into just six of the hundreds of attacks on sites like hospitals and schools committed during the Syrian civil war. In a summary of its work, published on Monday, the board refrained from specifically blaming Russia, despite strong evidence, previously published by The New York Times, that a Russian warplane had carried out one of the six — the bombing of a school.

The inquiry stated only that “the Government of Syria and/or its allies had carried out the airstrike.”

“This is a deliberately mealy-mouthed report,” said Richard Gowan, U.N. director at the International Crisis Group.

“On a charitable reading, this summary contains enough oblique and tentative statements confirming the Syrian government and Russians’ responsibility,” he said. “On a less charitable reading, this is an effort to minimize offending Moscow that reflects the fact that U.N. officials believe that continued cooperation with Russia is key to the future of humanitarian operations in Syria.”

Human rights and advocacy groups had criticized the board of inquiry’s limited scope after its establishment by Secretary-General António Guterres in August, saying it ignored hundreds of other attacks on hospitals, clinics and medical personnel committed by the government of President Bashar al-Assad and his Russian ally.

Physicians for Human Rights, an advocacy group that tracks attacks on medical workers in Syria, has documented at least 595 such attacks since the civil war began in 2011. Of those, 282 have occurred since Russia intervened in September 2015 in support of Mr. Assad.

At least 923 medical workers have been killed since 2011. The Syrian government or its allies, primarily Russia, committed 536 of the 595 attacks, according to the group’s statistics.

But Mr. Guterres gave the inquiry a mandate only to look into attacks on humanitarian targets that had been supported by the United Nations or included in its “deconfliction” system, through which organizations could register their sites in the hope of protecting them from attack.

He directed the inquiry to look at seven specific strikes carried out from April to July 2019 in opposition-held territory in northwestern Syria: on a school, a refugee camp, a children’s services center, three hospitals and a medical clinic. The board dropped one of the hospitals from its review, concluding that it did not match Mr. Guterres’s criteria.

It also determined that among the six attacks it had investigated, the Syrian government or its allies had committed all but the one against the refugee camp, which the board said was probably carried out by opposition forces.

“The charges in this report could not be more serious. And the incidents the report studied are the tip of the iceberg,” said David Miliband, president of the International Rescue Committee.

The Times has previously reported that Russian warplanes bombed a string of hospitals in northwestern Syria over one 12-hour period in May 2019 and then returned to bomb one of those hospitals again in November.

The hospital that was bombed twice, in the town of Kafr Nabl, was one of the sites under investigation by the board of inquiry. But instead of looking into the two Russian attacks, it focused instead on a separate attack on the same hospital, carried out by the Syrian government in July.

Before the inquiry’s publication of the report, Russia pressed Mr. Guterres not to release its conclusions, diplomats have said. Russia has vetoed 14 Security Council resolutions calling for action on Syria since 2011. In December, it blocked a resolution on cross-border aid deliveries from Turkey and Iraq to millions of Syrian civilians.

Louis Charbonneau, the United Nations director at Human Rights Watch, said the refusal to explicitly name Russia was “deeply disappointing.” He added that the widespread attacks on humanitarian facilities and hospitals in northwestern Syria had, in addition to causing direct suffering, led to “a tragic and criminal reduction” in the area’s ability to deal with the likely spread of coronavirus.

The Russian and Syrian missions to the United Nations did not comment on the report.

The report also addressed some flaws in the deconfliction system, which relief groups had harshly criticized for failing to prevent attacks on hospitals and being marred by factual errors. The system, run by the United Nations Office for the Coordination of Humanitarian Affairs, was meant to share the coordinates of protected facilities among the warring parties, including Russia.

The report found that until September the United Nations did not have procedures for verifying, storing and updating those coordinates, and that confusion over exactly what the system would do to protect humanitarian sites had led to mistrust.

Mr. Miliband called on the United Nations to develop “accountability mechanisms to deter further attacks and bring justice for those who have already suffered.”

But Mr. Gowan said he doubted that the report would do anything to deter Russia.

“It may reassure Syrian and Russian officers that they are unlikely to face any real accountability in future,” he said.